Foreign trade of the United States

The regulation of trade is constitutionally vested in the United States Congress. After the Great Depression, the country emerged as among the most significant global trade policy-makers, and it is now a partner to a number of international trade agreements, including the General Agreement on Tariffs and Trade (GATT) and the International Trade Organization (ITO). Gross U.S. assets held by foreigners were $16.3 trillion as of the end of 2006 (over 100% of GDP).

The country has trade relations with many other countries. Within that, the trade with Europe and Asia is predominant. To fulfill the demands of the industrial sector, the country has to import mineral oil and iron ore on a large scale. Machinery, cotton yarn, toys, mineral oil, lubricants, steel, tea, sugar, coffee, and many more items are traded. The country's export list includes food grains like wheat, corn, and soybean. Aeroplane, cars, computers, paper, and machine tools required for different industries.

The Constitution gives Congress express power over the imposition of tariffs and the regulation of international trade. As a result, Congress can enact laws including those that: establish tariff rates; implement trade agreements; provide remedies against unfairly traded imports; control exports of sensitive technology; and extend tariff preferences to imports from developing countries. Over time, and under carefully prescribed circumstances, Congress has delegated some of its trade authority to the Executive Branch. Congress, however, has, in some cases, kept tight reins on the use of this authority by requiring that certain trade laws and programs be renewed; and by requiring the Executive Branch to issue reports to Congress to monitor the implementation of the trade laws and programs.[1]

The authority of Congress to regulate international trade is set out in Article I, Section 8, Paragraph 1 of the United States Constitution:

The Congress shall have power To lay and collect Taxes, Duties, Imposts and Excises, to pay the Debts and provide for the common Defence and to promote the

Embargo Act of 1807 was designed to force Britain to rescind its restrictions on American trade, but failed, and was repealed in early 1809.

During the Civil War period, leaders of the Confederacy were confident that Britain would come to their aid because of British reliance on Southern cotton.[2] The Union was able to avoid this, through skillful use of diplomacy and threats to other aspects of European-U.S. trade relations.

While the United States has always participated in international trade, it did not take a leading role in global trade policy-making until the Great Depression. Congress and The Executive Branch came into conflict in deciding the mix of trade promotion and protectionism. In order to stimulate employment, Congress passed the Reciprocal Trade Agreements Act of 1934, allowing the executive branch to negotiate bilateral trade agreements for a fixed period of time. During the 1930s the amount of bilateral negotiation under this act was fairly limited, and consequently did little to expand global trade.

Near the end of the Second World War U.S. policy makers began to experiment on a broader level. In the 1940s, working with the British government, the United States developed two innovations to expand and govern trade among nations: the General Agreement on Tariffs and Trade (GATT) and the International Trade Organization (ITO). GATT was a temporary multilateral agreement designed to provide a framework of rules and a forum to negotiate trade barrier reductions among nations. 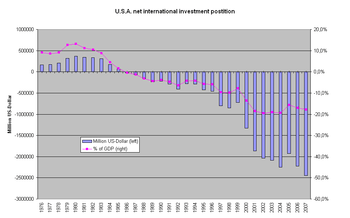 Deteriorating U.S. net international investment position (NIIP) has caused concern among economists over the effects of outsourcing and high U.S. trade deficits over the long-run.[4] 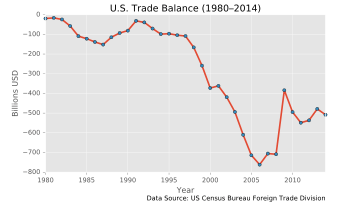 China gains entry to the WTO as Most favoured nation in early 2000s.

United States trade policy has varied widely through various American historical and industrial periods. As a major developed nation, the U.S. has relied heavily on the import of raw materials and the export of finished goods. Because of the significance for American economy and industry, much weight has been placed on trade policy by elected officials and business leaders.[5]

The 1920s marked a decade of economic growth in the United States following a Classical supply side policy.[6] U.S. President Warren Harding signed the Emergency Tariff of 1921 and the Fordney–McCumber Tariff of 1922. Harding's policies reduced taxes and protected U.S. business and agriculture.[7] Following the Great Depression and World War II, the United Nations Monetary and Financial Conference brought the Bretton Woods currency agreement followed by the economy of the 1950s and 1960s. In 1971, President Richard Nixon ended U.S. ties to Bretton Woods, leaving the U.S. with a floating fiat currency. The stagflation of the 1970s saw a U.S. economy characterized by slower GDP growth. In 1988, the United States ranked first in the world in the Economist Intelligence Unit "quality of life index" and third in the Economic Freedom of the World Index.[8]

Some economists believe that GDP and employment can be dragged down by an over-large deficit over the long run.[10][11] Others believe that trade deficits are good for the economy.[12] The opportunity cost of a forgone tax base may outweigh perceived gains, especially where artificial currency pegs and manipulations are present to distort trade.[13]

These issues have raised concerns among economists and unfunded liabilities were mentioned as a serious problem facing the United States in the President's 2006 State of the Union address.[15][16] On June 26, 2009, Jeff Immelt, the CEO of General Electric, called for the U.S. to increase its manufacturing base employment to 20% of the workforce, commenting that the U.S. has outsourced too much in some areas and can no longer rely on the financial sector and consumer spending to drive demand.[17]

The US last had a trade surplus in 1975.[20] However, recessions may cause short-run anomalies to rising trade deficits. The balance of trade in the United States has been a concern among economists and business people. Warren Buffett, founder of Berkshire Hathaway, was quoted in the Associated Press (January 20, 2006) as saying "The U.S trade deficit is a bigger threat to the domestic economy than either the federal budget deficit or consumer debt and could lead to political turmoil... Right now, the rest of the world owns $3 trillion more of us than we own of them."

In both a 1987 guest editorial to the Omaha-World Herald and a more detailed 2003 Fortune article, Buffett proposed a tool called Import Certificates as a solution to the United States' problem and ensure balanced trade. "The rest of the world owns a staggering $2.5 trillion more of the U.S. than we own of other countries. Some of this $2.5 trillion is invested in claim checks—U.S. bonds, both governmental and private— and some in such assets as property and equity securities."[21]

Today the United States' largest trading partner is Canada.[22] China has seen substantial economic growth in the past 50 years and though a nuclear-security summit that took place in early 2010 president Obama hoped to insure another 50 years of growth between the two countries. On April 19, 2010, President Barack Obama met with China's President Hu Jintao to discuss trade policies between the two countries.[23]

Though the US trade deficit has been stubborn, and tends to be the largest by dollar volume of any nation, even the most extreme months as measured by percent of GDP there are nations that are far more noteworthy. Case in point, post 2015 Nepal Earthquake, Nepal's trade gap (in goods & services) was a shocking 33.3% of GDP[24] although heavy remittances considerably offset that number.

The main customs territory of the United States includes the 50 states, the District of Columbia, and the territory of Puerto Rico, with the exception of over 200 foreign trade zones designated to encourage economic activity. People and goods entering this territory are subject to inspection by U.S. Customs and Border Protection. The remaining insular areas are separate customs territories administered largely by local authorities:

Transportation of certain living things or agricultural products may be prohibited even within a customs territory. This is enforced by U.S. Customs and Border Protection, the federal Animal and Plant Health Inspection Service, and even state authorities such as the California Department of Food and Agriculture.

Investment in the United States

This figure rises as long as the US maintains an imbalance in trade, when the value of imports substantially outweighs the value of exports. This external debt does not result mostly from loans to Americans or the American government, nor is it consumer debt owed to non-US creditors. It is an accounting entry that largely represents US domestic assets purchased with trade dollars and owned overseas, largely by US trading partners.[4]

For countries like the United States, a large net external debt is created when the value of foreign assets (debt and equity) held by domestic residents is less than the value of domestic assets held by foreigners. In simple terms, as foreigners buy property in the US, this adds to the external debt. When this occurs in greater amounts than Americans buying property overseas, nations like the United States are said to be debtor nations, but this is not conventional debt like a loan obtained from a bank.[4][26]

If the external debt represents foreign ownership of domestic assets, the result is that rental income, stock dividends, capital gains and other investment income is received by foreign investors, rather than by U.S. residents. On the other hand, when American debt is held by overseas investors, they receive interest and principal repayments. As the trade imbalance puts extra dollars in hands outside of the U.S., these dollars may be used to invest in new assets (foreign direct investment, such as new plants) or be used to buy existing American assets such as stocks, real estate and bonds. With a mounting trade deficit, the income from these assets increasingly transfers overseas.[4][26]

Of major concern is the magnitude of the NIIP (or net external debt), which is larger than those of most national economies. Fueled by the sizable trade deficit, the external debt is so large that economists are concerned over whether the current account deficit is unsustainable. A complicating factor is that trading partners such as China, depend for much of their economy on exports, especially to America. There are many controversies about the current trade and external debt situation, and it is arguable whether anyone understands how these dynamics will play out in a historically unprecedented floating exchange rate system. While various aspects of the U.S. economic profile have precedents in the situations of other countries (notably government debt as a percentage of GDP), the sheer size of the U.S., and the integral role of the US economy in the overall global economic environment, create considerable uncertainty about the future.[4][26]

According to economists such as Larry Summers and Paul Krugman, the enormous inflow of capital from China is one of the causes of the global financial crisis of 2008–2009. China had been buying huge quantities of dollar assets to keep its currency value low and its export economy humming, which caused American interest rates and saving rates to remain artificially low. These low interest rates, in turn, contributed to the United States housing bubble because when mortgages are cheap, house prices are inflated as people can afford to borrow more.[28][29] 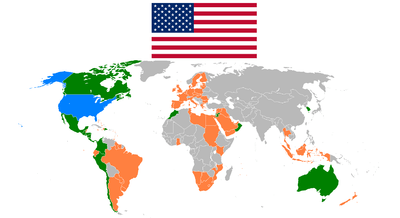 The United States is a partner to many trade agreements, shown in the chart below and the map to the right.

The U.S. is a member of several international trade organizations. The purpose of joining these organizations is to come to agreement with other nations on trade issues, although there is domestic political controversy to whether or not the U.S. government should be making these trade agreements in the first place. These organizations include: