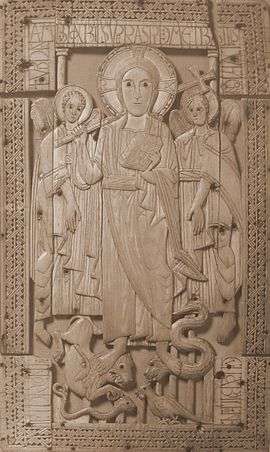 Psalm 91[2] (Greek numbering: Psalm 90), referred to by its Latin title Qui habitat (after its first line, "Whoso dwelleth under the defence of the Most High"), is known as the Psalm of Protection. As a religious song, this Psalm is commonly invoked in times of hardship. The author of this psalm is unknown.[3]

In Western Christianity it is often sung or recited during services of Compline.[9]

In the Revised Common Lectionary (Year C)[10] the psalm is appointed for the first Sunday in Lent, linking it to the temptation of Christ, where the devil quotes this psalm.

In the medieval Western Church it was included in the readings for Good Friday.

In Eastern Orthodoxy it is used in the prayers of the Sixth Hour, at Great Compline, and also in the Memorial Service for the departed (Pannikhida).

Christ treading on the beasts

Verse 13, in the King James Version "Thou shalt tread upon the lion and adder: the young lion and the dragon shalt thou trample under feet" was the origin of the iconography of Christ treading on the beasts, seen in the Late Antique period, and revived in Carolingian and Anglo-Saxon art.