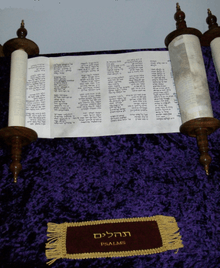 Scroll of the Psalms 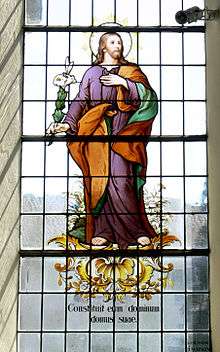 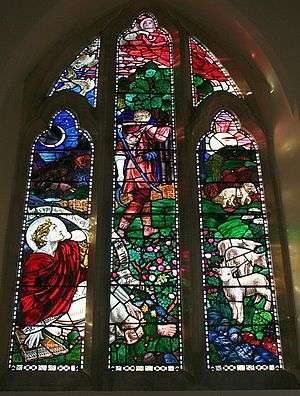 Psalm 104 (Greek numbering: Psalm 103) is one of the psalms from the Book of Psalms of the Hebrew Bible.[1] It is notable among the psalms for describing YHWH (Elohim) explicitly as the creator deity. German philosopher Johann Gottfried Herder remarked, "It is worth studying the Hebrew language for ten years in order to read Psalm 104 in the original".

The subject matter and its presentation is closely related both to the first Genesis creation narrative (Genesis 1, chronologically younger than the second version in Genesis 2) where likewise the waters are separated before the creation of Sun and Moon, and to older accounts of creation from the Ancient Near East, both Mesopotamian and Egyptian. In particular, the Egyptian Great Hymn to the Aten (14th century BC) is frequently cited as a predecessor.[2][3]

One of the longer psalms, it is traditionally divided into 35 verses.[4] begins by describing the glory of God ("Who coverest thyself with light as with a garment" v. 2). Verse 5 asserts that God has "laid the foundations [מכון] of the Earth". Verses 6 to 13 concern the ordering of the waters, verses 14-18 vegetation and animal life, 19-24 Sun and Moon and the cycle of day and night.

v. 24 (KJV): "O LORD, how manifold are thy works! in wisdom hast thou made them all: the earth is full of thy riches."

Verses 27-30 emphasises how all creature still depend on the ongoing attention and provision by the creator, and perish if he averts his attention.

v. 30 (KJV): "Thou sendest forth thy spirit, they are created: and thou renewest the face of the earth."

The concluding verses 31-35 reiterate the power and glory of YHWH, and the composer expresses his adoration, and, in the final verse, his wish that the sinners (חטא) and wicked (רשע) be "consumed out of the earth). In the Masoretic text, the phrase Hallelujah is placed at the end of the final verse. This is lacking in the Septuagint and the Vulgate, but it is rendered by the KJV as "Praise ye the LORD".

Its main liturgical usage in the Eastern Orthodox Church is at the beginning of vespers (evening prayers) and the all-night vigil. While it is technically one of the elements of the vespers service prescribed for the senior reader (that is, the elder or abbot of a monastery, or in a parish the seniormost reader at the kliros), it is customarily read or chanted by a reader after the opening prayers of the service.

The psalm is meant to be read or chanted in a plain style at services of vespers which are not part of a vigil. When vespers is served as part of a vigil, an abbreviated musical version is usually sung by the choir. Several such musical arrangements of the psalm have been composed over the years; perhaps the most familiar is that found in the Obikhod, or common setting.

In the context of its vespers/vigil setting, this psalm is understood to be a hymn of creation, in all the fulness wherein God has created it - it speaks of animals, plants, waters, skies, etc. In the scope of the liturgical act, it is often taken to be Adam's song, sung outside the closed gates of Eden from which he has been expelled (cf. Genesis 3). While the reader chants the psalm, the priest stands outside the closed Royal Doors wearing only his epitrachilion, making this symbolism more evident.

This psalm is used during the Easter Vigil on Holy Saturday night (the Vigil being the inauguration of the fifty-day Easter season, the end of Holy Week- and by extension Lent- and the ending of the three-day Easter Triduum of Holy Thursday, Good Friday, and Easter). In the Liturgy of the Word, the first reading is the Creation story of the Book of Genesis, and Psalm 104, which deals with the same material, is the responsorial psalm. It is used again during Pentecost, at the end of the Easter season, as the responsorial psalm for the Vigil and the Sunday Mass.[13][14]

Bob Marley thought that cannabis use was prevalent in the Bible, reading passages such as Psalm 104 as showing approval of its usage.[15]