For Isaac Asimov's use of the term in science fiction, see psychohistory (fictional).

Psychohistory is the study of the psychological motivations of historical events.[1] It attempts to combine the insights of psychoanalysis with the research methodology of the social sciences to understand the emotional origin of the social and political behavior of groups and nations, past and present. Its subject matter is childhood and the family, and psychological studies of anthropology and ethnology. 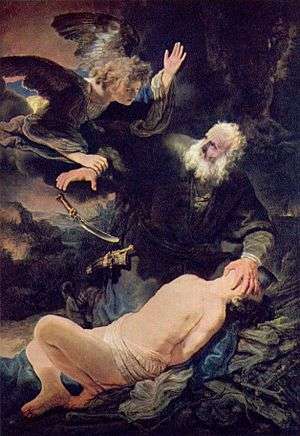 Rembrandt's painting of the sacrifice of Isaac (Gen.22). Psychohistory holds that ritual child sacrifice once occurred in most cultures.

Psychohistory derives many of its concepts from areas that are perceived to be ignored by conventional historians and anthropologists as shaping factors of human history, in particular, the effects of parenting practice and child abuse.[2] According to conventional historians "the science of culture is independent of the laws of biology and psychology".[3] and "[t]he determining cause of a social fact should be sought among social facts preceding and not among the states of individual consciousness".[4]

Psychohistorians, on the other hand, suggest that social behavior such as crime and war may be a self-destructive re-enactment of earlier abuse and neglect; that unconscious flashbacks to early fears and destructive parenting could dominate individual and social behavior.[5][6]

Psychohistory relies heavily on historical biography. Notable examples of psychobiographies are those of Lewis Namier, who wrote about the British House of Commons, and Fawn Brodie, who wrote about Thomas Jefferson.

Science fiction author and scientist/science writer Isaac Asimov popularized the term in his famous Foundation series of novels, though in his works the term psychohistory is used fictionally for a mathematical discipline that can be used to predict the general course of future history.

There are three inter-related areas of psychohistorical study.[7]

1. The history of childhood – which looks at such questions as:
2. Psychobiography – which seeks to understand individual historical people and their motivations in history.
3. Group psychohistory – which seeks to understand the motivations of large groups, including nations, in history and current affairs. In doing so, psychohistory advances the use of group-fantasy analysis of political speeches, political cartoons and media headlines since the loaded terms, metaphors and repetitive words therein offer clues to unconscious thinking and behaviors.[7]

Emergence as a discipline

Sigmund Freud's well known work, Civilization and Its Discontents (1929), included an analysis of history based on his theory of psychoanalysis. Yet, Freud's text is in no way a psycho-historical work since the focus of the study is to examine and explain the level of individual psyche which may arise from the influence of the structures of civilization. It is in fact the opposite of psycho-history in that it claims that the unconscious and the individual psyche are both structural effects of different social forces, i.e., civilization.

Wilhelm Reich combined his psychoanalytic and political theories in his book The Mass Psychology of Fascism in 1933.

The psychologist and philosopher Erich Fromm wrote about the psychological motivation behind political ideology, starting with The Fear of Freedom in 1941.

Another member of the Frankfurt school, Theodor Adorno, published The Authoritarian Personality, in 1950, which was an influential sociological book which could be taken as something of a proto-psychohistorical book.

Its first academic use appeared in Erik Erikson's book Young Man Luther (1958), where the author called for a discipline of "psycho-history" to examine the impact of human character on history.

Lloyd deMause developed a formal psychohistorical approach from 1974 onwards, and continues to be an influential theorist in this field.

Independence as a discipline

Psychohistorians have argued that psychohistory is a separate field of scholarly inquiry with its own particular methods, objectives and theories, which set it apart from conventional historical analysis and anthropology. Some historians, social scientists and anthropologists have, however, argued that their disciplines already describe psychological motivation and that psychohistory is not, therefore, a separate subject. Others regard it as an undisciplined field of study, due to its emphasis given to speculation on the psychological motivations of people in history. Doubt has also been cast on the viability of the application of post-mortem psychoanalysis by Freud's followers.[8]

Psychohistorians maintain that the difference is one of emphasis and that, in conventional study, narrative and description are central, while psychological motivation is hardly touched on.[9] Psychohistorians accuse most anthropologists and ethnologists of being apologists for incest, infanticide, cannibalism and child sacrifice.[10] They maintain that what constitutes child abuse is a matter of objective fact, and that some of the practices which mainstream anthropologists apologize for (e.g., sacrificial rituals) may result in psychosis, dissociation and magical thinking: particularly for the surviving children who had a brother or sister who was sacrificed by their parents.

Lloyd deMause has described a system of psychogenic modes (see below) which describe the range of styles of parenting he has observed historically and across cultures.

Psychohistorians have written much about changes in the human psyche through history; changes that they believe were produced by parents, and especially the mothers' increasing capacity to empathize with their children. Due to these changes in the course of history, different psychoclasses (or psychogenic modes) emerged. A psychoclass is a type of mentality that results from, and is associated with, a particular childrearing style, and in its turn influences the method of childrearing of the next generations. According to psychohistory theory, regardless of the changes in the environment, it is only when changes in childhood occur and new psychoclasses evolve that societies begin to progress.

The major psychogenic modes described by deMause are:[11][12]

Psychohistorians maintain that the five modes of abusive childrearing (excluding the "helping mode") are related to psychiatric disorders from psychoses to neuroses.

The chart below shows the dates at which these modes are believed to have evolved in the most advanced nations, based on contemporary accounts from historical records. A black-and-white version of the chart appears in Foundations of Psychohistory.[12]

The Y-Axis on the above chart serves as an indicator of the new stage and not a measurement of the stage's size or relation to the x-axis.

The timeline doesn't apply to hunter-gatherer societies. It doesn't apply either to the Greek and Roman world, where there was a wide variation in childrearing practices. It is notable that the arrival of the Ambivalent mode of child-rearing preceded the start of the Renaissance (mid 14th century) by only one or two generations, and the arrival of the Socializing mode coincided with the Age of Enlightenment, which began in the late 18th century.

Earlier forms of childrearing coexist with later modes, even in the most advanced countries. An example of this are reports of selective abortion (and sometimes exposure of baby girls)[14] especially in China, Korea, Taiwan, Singapore, Malaysia, India, Pakistan, New Guinea, and many other developing countries in Asia and North Africa,[15] regions in which millions of women are "missing".[16] The conflict of new and old psychoclasses is also highlighted in psychohistorians' thought. This is reflected in political contrasts – for instance, in the clash between Blue State and Red State voters in the contemporary United States[17][18] – and in civil wars.

Another key psychohistorical concept is that of group fantasy, which deMause regards as a mediating force between a psychoclass's collective childhood experiences (and the psychic conflicts emerging therefrom), and the psychoclass's behavior in politics, religion and other aspects of social life.[13]

A psychoclass for postmodern times

According to the psychogenic theory, since Neanderthal man most tribes and families practiced infanticide, child mutilation, incest and beating of their children throughout prehistory and history. Presently the Western socializing mode of childrearing is considered much less abusive in the field, though this mode is not yet entirely free of abuse. In the opening paragraph of his seminal essay "The Evolution of Childhood" (first article in The History of Childhood), DeMause states:

The history of childhood is a nightmare from which we have only recently begun to awaken. The further back in history one goes, the lower the level of childcare, and the more likely children are to be killed, abandoned, beaten, terrorized and sexually abused.

There is notwithstanding an optimistic trait in the field. In a world of "helping mode" parents, deMause believes, violence of any other sort will disappear as well, along with magical thinking, mental disorders, wars and other inhumanities of man against man. Although, the criticism has been made that this itself is a form of magical thinking.[19]

There are no departments dedicated to "psychohistory" in any institution of higher learning, some history departments have run courses in it and a new field of study known as "cliodynamics" which has taken over the fields of interest formally associated with psychohistory. Still, psychohistory remains a controversial field of study, facing criticism in the academic community.[10][20][21][22][23] Psychohistory uses a plurality of methodologies, and it is difficult to determine which is appropriate to use in each circumstance.

DeMause has received criticism on several levels. His formulations have been criticized for being insufficiently supported by credible research.[24] He has also received criticism for being a strong proponent of the "black legend" view of childhood history (i.e. that the history of childhood was above all a history of progress, with children being far more often badly mistreated in the past).[25] Similarly, his work has been called a history of child abuse, not childhood.[26] The grim perspective of childhood history is known from other sources, e.g. Edward Shorter's The Making of the Modern Family and Lawrence Stone's The Family, Sex and Marriage in England 1500-1800. However, deMause received criticism for his repeated, detailed descriptions on childhood atrocities:

Recent psychohistory has also been criticized for being overly-entangled with DeMause, whose theories do not speak for the entire field.[28]

Boston University offers a Psychohistory course at the undergraduate level and has published course details.[29]

The Psychohistory Forum, publishes the quarterly journal Clio’s Psyche. It was founded in 1983 by historian and psychoanalyst Paul H. Elovitz. This organization of academics, therapists, and laypeople holds regular scholarly meetings in New York City and at international conventions. It also sponsors an online discussion group.