Wilhelm Maximilian Wundt (16 August 1832 – 31 August 1920) was a German physician, physiologist, philosopher, and professor, known today as one of the founding figures of modern psychology. Wundt, who noted psychology as a science apart from biology and philosophy, was the first person to ever call himself a psychologist.[6] He is widely regarded as the "father of experimental psychology".[7][8] In 1879, Wundt founded the first formal laboratory for psychological research at the University of Leipzig. This marked psychology as an independent field of study.[9] A Review of General Psychology survey, published in 2002, ranked Wundt as the 93rd most cited psychologist of the 20th century, tied with Edwin Boring, John Dewey, and Amos Tversky.[10]

By creating this laboratory he was able to explore the nature of religious beliefs, identify mental disorders and abnormal behavior, and find damaged parts of the brain. In doing so, he was able to establish psychology as a separate science from other topics. He also formed the first academic journal for psychological research, Philosophische Studien, in the year 1881.

Wundt was born at Neckarau, Baden (now part of Mannheim) on 16 August[12] 1832, the fourth child to parents Maximilian Wundt (a Lutheran minister), and his wife Marie Frederike, née Arnold (1797–1868). Wundt's paternal grandfather was Friedrich Peter Wundt (1742–1805), Professor of Geography and pastor in Wieblingen.[13] When Wundt was about four years of age, his family moved to Heidelsheim, then a small medieval town in Baden-Württemberg.

Wundt studied from 1851 to 1856 at the University of Tübingen, at the University of Heidelberg, and at the University of Berlin. After graduating as doctor of medicine from Heidelberg (1856), Wundt studied briefly with Johannes Peter Müller, before joining the University's staff, becoming an assistant to the physicist and physiologist Hermann von Helmholtz in 1858.[14] There he wrote Contributions to the Theory of Sense Perception (1858–62).[15] In 1865, he wrote a textbook about human physiology. However, his main interest was not in physiology but in the medical field of pathological anatomy.[12] In 1867 he became a professor in acquainting medical students with the exact physical needs for medical investigation. In 1874, he became a professor of "Inductive Philosophy" in Zurich.

During Wundt's time at the University of Heidelberg he offered the first course ever taught in scientific psychology, all the while stressing the use of experimental methods drawn from the natural sciences, emphasizing the physiological relationship of the human brain and the mind. His background in physiology would have a great effect on his approach to the new science of psychology. His lectures on psychology were published as Lectures on the Mind of Humans and Animals in 1863–1864. He was promoted to Assistant Professor of Physiology at Heidelberg in 1864.[15] Weber (1795–1878) and Fechner (1801–1887), who worked at Leipzig, inspired Wundt's interest in psychology.

Wundt applied himself to writing a work that came to be one of the most important in the history of psychology, Principles of Physiological Psychology in 1874. This was the first textbook that was written pertaining to the field of psychology.[6] Wundt claimed that the book was "an attempt to mark out [psychology] as a new domain of science".[16] The Principles utilized a system of psychology that sought to investigate the immediate experiences of consciousness, including feelings, emotions, volitions and ideas, mainly explored through Wundt's system of "internal perception", or the self-examination of conscious experience by objective observation of one's consciousness.

In 1875, Wundt moved to Leipzig. In 1879, at the University of Leipzig, Wundt opened the first laboratory ever to be exclusively devoted to psychological studies, and this event marked the official birth of psychology as an independent field of study. The new lab was full of graduate students carrying out research on topics assigned by Wundt, and it soon attracted young scholars from all over the world who were eager to learn about the new science that Wundt had developed.[17]

Like many other prominent psychologists of his time, Wundt was an atheist.[18] 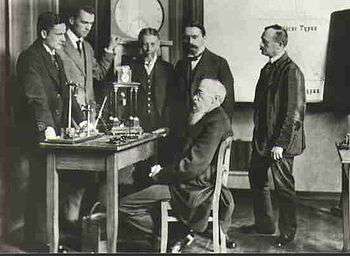 Wilhelm Wundt (seated) with colleagues in his psychological laboratory, the first of its kind

Wundt believed that scientific psychology should focus on analyzing consciousness, a person's subjective experience of the world and mind.[9] Parts of Wundt's system were developed and championed by his one-time student, Titchener, who described his system as structuralism, or the analysis of the basic elements that constitute the mind. This approach involved breaking consciousness down into elemental sensations and feelings.[9] Wundt believed that scientific psychology should focus on consciousness and therefore centralizes on structuralism. Wundt analyzes the constituents of the mind by using a method called introspection, which involves the subjective observation of one's own experience.[9] This became the reason why structuralism gradually faded out, based on the unreliability of this method.[9] Several of Wundt's works, including Principles of Physiological Psychology, are considered fundamentally important texts in the fields of physiology and psychology. Though widely recognized as important in the birth and growth of psychology, his influence on psychology today is a subject of continuing debate among experts. Wundt also influenced in the field of psycholinguistics. For example, the influential Leonard Bloomfield based his linguistics textbook, published in 1914, on Wundtian psychology. Wundt hypothesized that the mental sentence, or "inner psychological construction", determines the unfolding sentence, and should therefore be regarded as a unit of speech.[19]

In 1886, in his "Logik", Wundt formulated the famous expression heterogony of ends (Heterogonie der Zwecke).[20][21]

Several of Wundt's students became eminent psychologists in their own right, including two who became philosophers (Ljubomir Nedić and Branislav Petronijević). They include: the Germans Oswald Külpe (a professor at the University of Würzburg), Ottmar Dittrich (who continued Wundt's work in psycholinguistics by heading the group on phonetics and psychology of language at the University of Leipzig); the Americans James McKeen Cattell (the first professor of psychology in the United States), G. Stanley Hall (the father of the child psychology movement and adolescent developmental theorist, head of Clark University), Charles Hubbard Judd (Director of the School of Education at the University of Chicago), Hugo Münsterberg, Walter Dill Scott (who contributed to the development of industrial psychology and taught at Harvard University), Edward Bradford Titchener, Lightner Witmer (founder of the first psychological clinic in his country); the Englishman Charles Spearman (who developed the two-factor theory of intelligence and several important statistical analyses – see Factor analysis, Spearman's rank correlation coefficient); the Romanian Constantin Rădulescu-Motru (Personalist philosopher and head of the Philosophy department at the University of Bucharest).

The University of Leipzig assigned Wundt a lab in 1876 to store equipment he had brought from Zurich.[22] Located in the Konvikt building, many of Wundt's demonstrations took place in this laboratory due to the inconvenience of transporting his equipment between the lab and his classroom. Wundt collected many pieces of equipment such as tachistoscopes, chronoscopes, pendulums, electrical devices, timers, and sensory mapping devices and was known to assign an instrument to various graduate students with the assignment of developing uses for future research in experimentation.[22]

In 1879 Wundt began conducting experiments that were not part of his course work, and he claimed that these independent experiments solidified his lab's legitimacy as a formal laboratory of psychology, though the University did not officially recognize the building as part of the campus until 1883.[22] Wundt faced much opposition in regards to his colleague's rejections of psychology as a legitimate science and their questions concerning the nature of introspection.[22] Despite this opposition, the laboratory grew and encompassing a total of eleven rooms, the Psychological Institute, as it became known, eventually moved to a new building that Wundt had designed specifically for psychological research.[22]

Wundt's laboratory students called their approach Ganzheitspsychologie ("holistic psychology") following Wundt's death.[23] Much of Wundt's work was derided mid-century in the United States because of a lack of adequate translations, misrepresentations by certain students, and behaviorism's polemic with the structuralist program. Titchener, a two-year resident of Wundt's lab and one of Wundt's most vocal advocates in the United States, is responsible for several English translations and mistranslations of Wundt's works that supported his own views and approach, which he termed "structuralism" and claimed was wholly consistent with Wundt's position.

Titchener's focus on internal structures of mind was rejected by behaviorists following the ideas of B. F. Skinner; the latter dominated psychological studies in the mid-1900s. Part of this rejection included Wundt, whose work was eclipsed during this period. In later decades, his actual positions and techniques have seen reconsideration and reassessment by major psychologists. 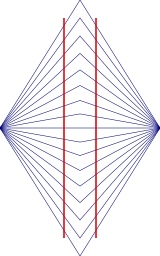 An optical illusion described by him is called the Wundt illusion. It shows how straight lines appear curved when seen against a set of radiating lines.

Wundt tried to provide objective measurements of conscious processes by using reaction time techniques similar to those first developed by Helmholtz. His fasting research participants, focusing only on the response they were to make, could respond automatically to the tone because they didn't have to engage in the additional step of interpretation. "This type of experimentation broke new ground by showing that psychologists could use scientific techniques to disentangle even subtle conscious processes."[24] Additionally, Wundt's reaction time procedures still influence modern reseach.[25]

"Like many of his contemporaries, Wundt accepted a developmental conception of mind; but 'developmental' in the idealist sense of unfolding reason, such that the highest intelligence is a logical product of more primitive manifestations."[26]

Wundt was extremely prolific in publications, of which this is a selection only.