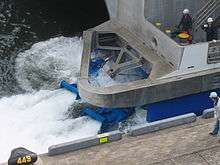 A view of pump-jets operating

Two of four KaMeWa waterjets on the high-speed ferry Discovery 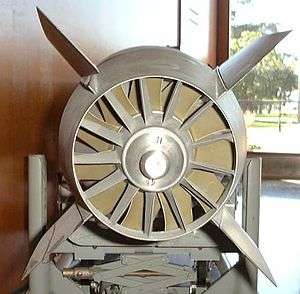 Rear view of pump-jet on a Mark 50 torpedo

A pump-jet, hydrojet, or water jet is a marine system that creates a jet of water for propulsion. The mechanical arrangement may be a ducted propeller with nozzle, or a centrifugal pump and nozzle.

Forward, back, side & turn by pump-jet

A pump-jet works by having an intake (usually at the bottom of the hull) that allows water to pass underneath the vessel into the engines. Water enters the pump through this inlet. The pump can be of a centrifugal design for high speeds, an inducer for low speeds, or an axial flow pump for medium speeds. The water pressure inside the inlet is increased by the pump and forced backwards through a nozzle. With the use of a reversing bucket, reverse thrust can also be achieved for faring backwards, quickly and without the need to change gear or adjust engine thrust. The reversing bucket can also be used to help slow the ship down when braking. This feature is the main reason pump jets are so maneuverable.

The nozzle also provides the steering of the pump-jets. Plates, similar to rudders, can be attached to the nozzle in order to redirect the water flow port and starboard. In a way, this is similar to the principles of air thrust vectoring, a technique which has long been used in military jet-powered aircraft. This provides pumpjet-powered ships with superior agility at sea. Another advantage is that when faring backwards by using the reversing bucket, steering is not inverted, as opposed to propeller-powered ships.

Pump-jet powered watercraft do suffer from the Coandă effect, which must be taken into account when making changes in heading. The heading needs to be adjusted two degrees further than what would normally be required because of this effect.

Pump jets have some advantages over bare propellers for certain applications, usually related to requirements for high-speed or shallow-draft operations. These include:

The Italian inventor Secondo Campini showed the first functioning man-made pump-jet engine in Venice in 1931. However, he never applied for a patent, and since the device suffered from material problems resulting in a short life-span, it never became a commercial product. The first person to achieve that was New Zealand inventor Sir William Hamilton in 1954.

Pump-jets were once limited to high-speed pleasure craft (such as jet skis and jet boats) and other small vessels, but since 2000 the desire for high-speed vessels has increased and thus the pump-jet is gaining popularity on larger craft, military vessels and ferries. On these larger craft, they can be powered by diesel engines or gas turbines. Speeds of up to 40 knots can be achieved with this configuration, even with a conventional hull.[2]