With the paths of the pursuer and pursuee parameterized in time, the pursuee is always on the pursuer's tangent. That is, given F(t) the pursuer (follower) and L(t) the pursued (leader), for every t with F′(t) ≠ 0 there is an x such that 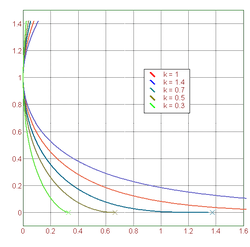 Curves of pursuit with different parameters

The path followed by a single pursuer, following a pursuee that moves at constant speed on a line, is a radiodrome. It is a solution of the differential equation 1+y' ² = k² (a−x²) y" ².

Curve of pursuit of vertices of a square (the mice problem for n=4).

Typical drawings of curves of pursuit have each point acting as both pursuer and pursuee, inside a polygon, and having each pursuer pursue the adjacent point on the polygon. An example of this is the mice problem.