Not to be confused with parallel transport.

An ellipse (red), its evolute (blue) and some parallel curves (green). Note how the parallel curves have cusps when they just touch (rather than intersect) the evolute at two distinct points. 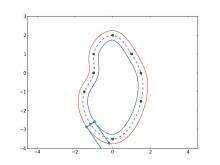 A parallel of a curve is the envelope of a family of congruent circles centered on the curve. It generalises the concept of parallel lines. It can also be defined as a curve whose points are at a fixed normal distance from a given curve.[1] These two definitions are not entirely equivalent as the latter assumes smoothness, whereas the former does not.[2]

In Computer-aided design the preferred term for a parallel curve is offset curve[2][3] [4] (In other geometric contexts, the term offset can also refer also to translation.[5]) Offset curves are important for example in numerically controlled machining, where they describe for example the shape of the cut made by a round cutting tool of a two-axis machine. The shape of the cut is offset from the trajectory of the cutter by a constant distance in the direction normal to the cutter trajectory at every point.[6]

In the area of 2D computer graphics known as vector graphics, the (approximate) computation of parallel curves is involved in one of the fundamental drawing operations, called stroking, which is typically applied to polylines or polybeziers (themselves called paths) in that field.[7]

Alternatively, one can fix a circle and a point on the curve and take the envelope of the translations taking that point to the circle.

Tracing the center of a circle rolled along the curve (see roulette) would give one branch of a parallel.

For a parametrically defined curve, the following equations define one branch of its parallel curve with distance

(the other branch is obtained with

As for parallel lines, a normal line to a curve is also normal to its parallels.

When parallel curves are constructed they will have cusps when the distance from the curve matches the radius of curvature. These are the points where the curve touches the evolute.

An efficient algorithm for offsetting is the level approach described by Kimel and Bruckstein (1993). [11]

There are numerous approximation algorithms for this problem. For a 1997 survey see.[12]

The problem generalizes fairly obviously to higher dimensions e.g. to offset surfaces, and slightly less trivially to pipe surfaces.[13] Note that the terminology for the higher-dimensional versions varies even more widely than in the planar case, e.g. other authors speak of parallel fibers, ribbons, and tubes.[14] For curves embedded in 3D surfaces the offset may be taken along a geodesic.[15]

Another way to generalize it is (even in 2D) to consider a variable distance, e.g. parametrized by another curve.[16][17] One can for example stroke (envelope) with an ellipse instead of circle[16] as it is possible for example in METAFONT.[18] More recently Adobe Illustrator has added somewhat similar facility in version CS5, although the control points for the variable width are visually specified.[19] In contexts where it's important to distinguish between constant and variable distance offsetting the acronyms CDO and VDO are sometimes used.[9]