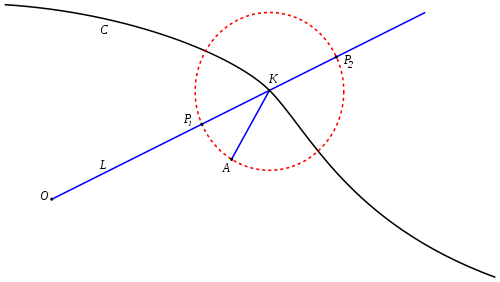 In geometry, a strophoid is a curve generated from a given curve C and points A (the fixed point) and O (the pole) as follows: Let L be a variable line passing through O and intersecting C at K. Now let P1 and P2 be the two points on L whose distance from K is the same as the distance from A to K. The locus of such points P1 and P2 is then the strophoid of C with respect to the pole O and fixed point A. Note that AP1 and AP2 are at right angles in this construction.

Let the curve C be given by

The points on the line OK have polar angle

, and the points at distance d from K on this line are distance

from the origin. Therefore the equation of the strophoid is given by

The complex nature of the formulas given above limits their usefulness in specific cases. There is an alternative form which is sometimes simpler to apply. This is particularly useful when C is a sectrix of Maclaurin with poles O and A.

the angle between OK and the x-axis, and

the angle between AK and the x-axis. Suppose

can be given as a function

be the angle at K so

. We can determine r in terms of l using the law of sines. Since

Let P1 and P2 be the points on OK that are distance AK from K, numbering so that

is isosceles with vertex angle

, so the remaining angles,

. The angle between AP1 and the x-axis is then

By a similar argument, or simply using the fact that AP1 and AP2 are at right angles, the angle between AP2 and the x-axis is then

The polar equation for the strophoid can now be derived from l1 and l2 from the formula above:

, in that case l1 and l2 will have the same form so the strophoid is either another sectrix of Maclaurin or a pair of such curves. In this case there is also a simple polar equation for the polar equation if the origin is shifted to the right by a.

Let C be a line through A. Then, in the notation used above,

is a constant. Then

. The polar equations of the resulting strophoid, called an oblique strphoid, with the origin at O are then

It's easy to check that these equations describe the same curve.

Moving the origin to A (again, see Sectrix of Maclaurin) and replacing −a with a produces

In rectangular coordinates, with a change of constant parameters, this is

This is a cubic curve and, by the expression in polar coordinates it is rational. It has a crunode at (0, 0) and the line y=b is an asymptote.

This is called the right strophoid and corresponds to the case where C is the y-axis, O is the origin, and A is the point (a,0).

The Cartesian equation is

The curve resembles the Folium of Descartes and the line x = −a is an asymptote to two branches. The curve has two more asymptotes, in the plane with complex coordinates, given by

Let C be a circle through O and A, where O is the origin and A is the point (a, 0). Then, in the notation used above,

is a constant. Then

. The polar equations of the resulting strophoid, called an oblique strphoid, with the origin at O are then

with C at these points.

This article is issued from Wikipedia - version of the 3/7/2014. The text is available under the Creative Commons Attribution/Share Alike but additional terms may apply for the media files.