For additional information on the current bus services, see List of bus routes in Queens and Select Bus Service.

The Q20A and Q20B (collectively referred to as Q20A/B or Q20) and Q44 bus routes constitute a public transit line in Queens, New York City, United States, running primarily along Main Street between two major bus-subway hubs in the neighborhoods of Jamaica and Flushing. The Q20A/B terminates in College Point at the north end of Queens. The Q44 continues north into the borough of the Bronx, terminating in the West Farms neighborhood near the Bronx Zoo. The Q44 is one of two Queens bus routes to operate between the two boroughs (along with the Q50).

The Q44 and Q20 were originally operated by the North Shore Bus Company from the 1930s to 1947; they are now operated by MTA Regional Bus Operations under the New York City Transit brand. In June 1999, the Q44 began limited stop service in Queens, with the Q20 split into two branches to provide local service. On November 29, 2015, the Q44 was converted into a Select Bus Service (SBS) route.

The current Q44 route remains largely unchanged since it began service in 1938.[6] It begins at the intersection of Merrick Boulevard and Archer Avenue in Downtown Jamaica, Queens (or Jamaica Center), just south of the 165th Street Bus Terminal. This terminus is shared with the Q17. Traveling west along Archer Avenue, it passes the Jamaica Center station of the Archer Avenue subway and its Bus Terminal. At the Sutphin Boulevard subway station and Jamaica Long Island Rail Road and Airtrain JFK station, the route turns north onto Sutphin Boulevard. It then turns west onto Hillside Avenue and north onto Queens Boulevard, interchanging with two stations of the IND Queens Boulevard Line. It then moves onto Main Street, running the entire distance of the street between Queens Boulevard and Northern Boulevard in Downtown Flushing (also known as Flushing Chinatown). In Downtown Flushing is the Flushing – Main Street terminal, where several bus lines, the IRT Flushing Line subway, and the LIRR Port Washington Branch interchange. The Q44 shifts onto Union Street and Parsons Boulevard to 14th Avenue in Whitestone. It then enters the Bronx–Whitestone Bridge, sharing the bridge with the Q50. Throughout Queens, the Q44 provides limited-stop service, making intermittent stops primarily at major intersections and points of interest.[2][4][7][8]

After entering the Bronx, the Q44 follows the Hutchinson River Parkway service road to just south of the Bruckner Interchange, making a single stop at Lafayette Avenue. It then turns west onto the Cross Bronx Expressway service road, running along either direction of the road to about the interchange with the Sheridan Expressway, except for a short portion on the Hugh J. Grant Circle at the Parkchester subway station. It then turns north onto Devoe Avenue, stopping at East Tremont Avenue near the West Farms Square subway station, and terminating at East 180th Street at the southern boundary of the Bronx Zoo. Buses layover on a bridge over the Bronx River, before reentering service on Boston Road. Although the Q44's northern terminal is signed as "Bronx Zoo" (formerly "Bronx Zoo − West Farms Square"), the zoo is not accessible from this location; the closest entrance is several blocks north at Bronx Park South and Boston Road.[2][4][7][9]

Prior to 1999, the Q44 ran entirely local between Jamaica, Queens and West Farms, Bronx, and was the only bus service along Main Street in Queens.[10] Before the implementation of Select Bus Service in November 2015, the route ran entirely local along the Cross Bronx Expressway service road; it now employs an equivalent to limited-stop service on the Cross Bronx, but with no additional local route operating along the street.[11]

The Q20A and B services share the same routing as the Q44 between Jamaica and Whitestone, before diverging west towards their shared terminal in College Point near Flushing Bay. The Q20A branches off at 20th Avenue, running along the northern edge of the former Flushing Airport and serving a large shopping center. This route is shared with the Q76. The Q20B turns west farther north at 14th Avenue, running through a much more residential area. Both the 20th and 14th Avenue routes were part of the original Q20, which only ran between College Point and Downtown Flushing. Both routes provide local service, but the Q20A runs at all times, while the Q20B operates only on weekdays.[8][12] 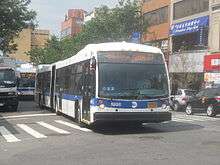 A Q44 Nova Bus articulated bus in Flushing, Queens in 2012, prior to implementation of Select Bus Service.

On February 15, 1932, North Shore Bus Company began operating a bus service to replace the Long Island Rail Road's Whitestone Branch,[6][13][14] labeled "Q35".[15] This service (not to be confused with the current Q35 service between Brooklyn and Rockaway Park) ran from the Flushing – Main Street terminal, north along Linden Street (now Linden Place) and 127th Street to 14th Avenue through Flushing and College Point;[16][17] this is the routing of the current Q25 bus in the area. It then ran east along 14th Avenue before following the current Q76 and Q15 routes to Whitestone.

On May 2, 1933, North Shore Bus began a shuttle service along Main Street between Main Street/Roosevelt Avenue subway station in Flushing and Horace Harding Boulevard (now the Long Island Expressway) in Queensboro Hill.[18] This was the predecessor to Q44 service; Main Street had yet to be extended south past Reeves Avenue (the north end of modern Queens College).[19]

On September 22, 1935 the North Shore Bus Company acquired, but did not merge with, the Flushing Heights Bus Corporation which operated the Q17 and the Q25 services between Jamaica and Flushing.[20][21] North Shore only acquired the Q25 on a temporary basis;[22] as compensation, the city assured the company that they would get a new route between Flushing and Jamaica via Main Street.[22] This was planned to go into service after the extension of Main Street, including a bridge over the Grand Central Parkway, was completed.[22] In 1937, several major bus route changes occurred. Queens–Nassau Transit took over the Q25 service and combined it with their Q34 route along Linden Place and 127th Street in College Point (predecessor to the northern portion of the current Q25). The Q35 was discontinued by North Shore, and was replaced by a new Q20 service.[22][23][24][25] The route of the Q20 was the same as the current route of the Q20B (via 14th Avenue), except that it continued north along 122nd Street (now College Point Boulevard) and followed the same looping route as the current Q25 (then Q34) near MacNeil Park at the north end of the borough.[24][26][27]

In December 1936, North Shore applied for a franchise on route "Q-44" between Flushing and Jamaica via Main Street.[28] On March 22, 1938, Q44 service began between Flushing – Main Street and Archer Avenue at the Jamaica Long Island Rail Road station,[6][29] when Main Street was extended south to the Grand Central Parkway.[19][30] The company advertised the route as the shortest "from the entire North Shore" of Queens to Jamaica, running 15 minutes between terminals.[31][32][33] Following the opening of the Bronx–Whitestone Bridge in April 1939,[34] on July 1 North Shore began operating bus service between West Farms Square in the Bronx and the 1939 New York World's Fair in Flushing Meadows–Corona Park.[35] On October 28, 1940, this route was combined with the Q44, running from Kew Gardens – Union Turnpike station (along the route that would become the Q74) through Whitestone and along East 177th Street (now the Cross Bronx Expressway service road) in the Bronx to Tremont Avenue and Boston Road at West Farms Square. An alternate branch ran to Westchester Square, Bronx.[26][36][37] By December of that year, the Q44 returned to Jamaica, running to the 165th Street Bus Terminal.[38] 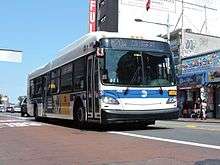 During the 1964 New York World's Fair, special Q44 service was inaugurated, running to the Rodman Street entrance of Flushing Meadows Park. The routes, designated "Q44 WF" and marked "World's Fair", originated from either West Farms Square or 165th Street and made stops on the Bronx or Queens portions of the route respectively before terminating at the fair.[52][53]

In June 1999, the Q44 began limited-stop service in Queens, with the Q20 split into two branches (Q20A and Q20B) to provide local service. Weekend service was also restored on the Q20A. Since the Q44 became limited, the Q20 was extended south along Main Street to make local stops.[10] At this time, the Q44 was shifted from its historical route in the neighborhood of Briarwood between Union Turnpike and Hillside Avenue. It had previously turned east onto the Grand Central Parkway service road and then turned south onto 150th Street towards Jamaica,[10][29][31][32][51] the same route employed since 1938 when Main Street dead-ended at the Grand Central service road.[30][57] It was rerouted to continue south via Main Street, and then via Queens Boulevard to Hillside Avenue.[10] 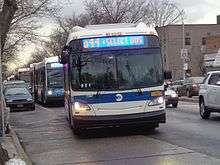 A standard-length New Flyer bus on Q44 SBS service, used as a supplement to the normal articulated fleet.

In 2004 and 2006, the Main Street corridor was identified as a potential route for Flushing-Jamaica bus rapid transit (BRT) service, as part of the first phase of the MTA and DOT's Select Bus Service (SBS) plan.[7][58] The corridor was ultimately not included in the first phase of SBS routes.[59][60] In February 2008, the MTA proposed an additional limited-stop service on the northern portion of the corridor between Flushing and Fordham Plaza, provisionally named the Q94. Eliminating the required transfer to the Bx9 at East 180th Street, it was referred to as a "Super Limited", and would have also replaced the special X32 school service (since discontinued) between Queens and Bedford Park.[60][61][62][63]

Though the Q94 was never implemented, the Q44 route was included in the SBS Phase II study in 2009.[7][59][64] By 2013, the Q44 was the first route in Queens to have a full fleet of articulated buses;[65][66][67] the same buses (the Nova Bus LFS model) used on SBS service. In 2014, the 164th Street corridor (Q65) and the Parsons/Kissena corridor (Q25 and Q34) joined the Main Street corridor as potential SBS routes between Flushing and Jamaica.[68][69] The Q25 Limited and Q44 Limited were selected for further studies, with the Q44 prioritized due to its high ridership, interborough connection between Queens and the Bronx, and the width of Main Street to facilitate bus lanes.[2][70] As part of the conversion, several stops in the Bronx were eliminated; those retained constituted 85% of passenger usage in the borough. Several limited stops in the Jamaica business district were also eliminated.[11]