For other uses of "J/Z", see JZ (disambiguation).

The J Nassau Street Local/Express and Z Nassau Street Express[1] (earlier Jamaica Express and displayed as Jamaica Local/Express on the R160 cars) are two rapid transit services in the B Division of the New York City Subway. Their route emblems, or "bullets", are colored terra cotta brown since they use the BMT Nassau Street Line in Lower Manhattan.[2] The J operates at all times while the Z, operating internally as a rush-hour variant of the J,[3] operates six trips in the peak direction on weekdays; both services use the entire BMT Archer Avenue, Jamaica, and Nassau Street lines between Jamaica Center–Parsons/Archer in Jamaica, Queens and Broad Street in Lower Manhattan (via the Williamsburg Bridge between Brooklyn and Manhattan). On weekdays, trains run express in the peak direction in Brooklyn between Myrtle Avenue and Marcy Avenue, bypassing three stations. During rush hours also in the peak direction, the J and Z form a skip-stop pair between Sutphin Boulevard–Archer Avenue–JFK Airport and Myrtle Avenue. At all other times, the J serves every station on its entire route.

Before the Chrystie Street Connection

The Jamaica Line – then known as the Broadway Elevated – was one of the original elevated lines in Brooklyn, completed in 1893 from Cypress Hills west to Broadway Ferry in Williamsburg.[4] It was then a two-track line, with a single local service between the two ends, and a second east of Gates Avenue, where the Lexington Avenue Elevated merged.[5] This second service later became the 12, and was eliminated on October 13, 1950 with the abandonment of the Lexington Avenue el.

The second major service on the Broadway Elevated ran between Canarsie and Williamsburg via the BMT Canarsie Line, started on July 30, 1906, when the Broadway and Canarsie tracks were connected at East New York.[6] As part of the Dual Contracts, an extension from Cypress Hills east to Jamaica was completed on July 3, 1918,[7] a third track was added west of East New York, and express trains began running on it in 1922.

The Brooklyn–Manhattan Transit Corporation numbered its services in 1924, and the Canarsie and Jamaica services became 14 and 15. Both ran express during rush hours in the peak direction west of East New York. Express trains would only stop at Myrtle Avenue, Essex Street and Canal Street, before making local stops afterwards. Additional 14 trains, between Eastern Parkway or Atlantic Avenue on the Canarsie Line and Manhattan provided rush-hour local service on Broadway.[8] When the 14th Street–Eastern Line and Canarsie Line were connected on July 14, 1928,[9] the old Canarsie Line service was renamed the Broadway (Brooklyn) Line, providing only weekday local service over the Broadway Elevated west of Eastern Parkway. The Atlantic Avenue trips remained, and rush-hour trains continued to serve Rockaway Parkway (Canarsie), though they did not use the Broadway express tracks.[10] The 14 was later cut back to only rush-hour service.

On the Manhattan end, the first extension was made on September 16, 1908, when the Williamsburg Bridge subway tracks opened.[11] Broadway and Canarsie trains were extended to the new Essex Street terminal, and further to Chambers Street when the line was extended on August 4, 1913.[12] When the BMT Nassau Street Line was completed on May 30, 1931, the 15 was extended to Broad Street,[13][14] and the 14 was truncated to Canal Street.[10] Some 14 trains began terminating at Crescent Street on the Jamaica Line in 1956.

Manhattan–bound rush hour skip-stop service between Jamaica and East New York was implemented on June 18, 1959, with trains leaving 168th Street on weekdays between 7 AM and 8:30 AM.[15] Express 15 trains served "A" stations, while the morning 14 became the Jamaica Local, running between Jamaica and Canal Street, and stopped at stations marked "B".[16] Express 15 trains continued to run express between Eastern Parkway and Canal Street, making only stops at Myrtle Avenue, Essex Street, and Canal Street.[15] These stations were as follows:[17]

Letters were assigned to most BMT services in the early 1960s. The BMT Jamaica services retained their numbers until November 1967. The 15 became the QJ[18] (express), and the 14 became the JJ.[19]

When the Chrystie Street Connection opened on November 26, 1967, many services were changed. The two local services - the JJ (non-rush hours) and KK (rush hours) - were combined as the JJ, but without any major routing changes. Thus non-rush hour JJ trains ran between Jamaica and Broad Street, while morning rush hour JJ trains ran to Canal Street, and afternoon rush hour JJ trains ran between Canal Street and Atlantic Avenue or Crescent Street. The rush-hour express J was combined with the weekday QT Brighton Local via tunnel to form the weekday QJ, running between Jamaica and Brighton Beach via the Jamaica Line (express during rush hours in the peak direction), BMT Nassau Street Line, Montague Street Tunnel, and BMT Brighton Line (local). Finally, the RJ was a special peak-direction rush-hour service, running fully local on the Jamaica Line, Nassau Street Line, Montague Street Tunnel, and BMT Fourth Avenue Line to 95th Street in Fort Hamilton. This was an extension of a former rush-hour RR service, and thus ran towards Jamaica in the morning and towards Fort Hamilton in the afternoon.[20]

The next change was made on July 1, 1968, when the Chrystie Street Connection tracks to the Williamsburg Bridge opened. The Jamaica Line portion of the rush-hour JJ was modified to become a new rush-hour KK, running between Jamaica (peak direction) or Eastern Parkway (both directions) and the new 57th Street station on the IND Sixth Avenue Line in Manhattan. The MM (with a dark green bullet on R-27 signage) was a proposed alternative to the KK as a local to 57th Street/6th Avenue, which finally opened in July, 1968.[21] The RJ was eliminated, being cut back to an RR variant, and the off-hour JJ was relabeled QJ (but not extended to Brighton Beach). At the same time, the existing skip-stop service was extended to afternoon Jamaica-bound trains, with those QJ trains running express west of Eastern Parkway and service "A" stations east to Jamaica, and those KK trains serving "B" stations. Less than two months later, on August 18, the QJ was extended to Coney Island–Stillwell Avenue.[22][23] 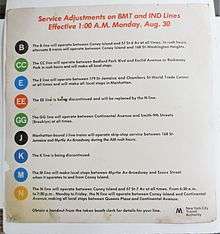 On January 2, 1973, the QJ, which was the longest route in the transit system, was cut back to Broad Street and redesignated the J; and the M was extended to Coney Island in its place. At the same time, the KK was cut back to Eastern Parkway from 168th Street and renamed the K,[24][25] and both skip-stop patterns were carried out by alternate J trains. Eventually, the K was discontinued entirely on August 30, 1976,[26] eliminating the J skip-stop and express service east of Myrtle Avenue in the PM rush hour. Skip-stop service was retained toward Manhattan during the AM rush hour. One-way express service remained west of Myrtle Avenue, since the M was switched to the local tracks at that time.[27]

The following table summarizes the changes that were made between 1959 and 1976.

The J was truncated to Queens Boulevard just after midnight on September 11, 1977,[28] and to 121st Street on April 15, 1985,[29] as portions of the elevated Jamaica Line closed and were demolished. The Q49 shuttle bus replaced service at the closed stations until 1988.

The BMT Archer Avenue Line opened on December 11, 1988, extending the line back east from 121st Street to Jamaica Center–Parsons/Archer. The Z train first ran that day, introducing the present J/Z skip-stop pattern.[30] The new Z trains would go skip-stop between Jamaica Center and Broadway Junction (later Myrtle Avenue) during rush hours. Bus service on several Queens bus routes was rerouted to serve Jamaica Center instead of the 169th Street station several blocks away.[31] The J/Z skip-stop service was touted as being faster to lower Manhattan than E, F, and R service, in an attempt to relieve some crowding on the IND Queens Boulevard Line. Because the MTA hoped that Queens passengers would transfer to the J/Z from the E, F, and R, every subway car on the J and Z's fleet was completely graffiti-free.[32]

From May 1 to September 1, 1999, the Williamsburg Bridge was closed for reconstruction. J trains ran only between Jamaica Center–Parsons/Archer and Myrtle Avenue. J/Z skip-stop service was in both directions between Jamaica Center and Eastern Parkway-Broadway Junction.[35][36][37] The closure was anticipated to last until October 1999, but subway service was restored one month ahead of schedule.[38] The project cost $130 million, including replacing the tracks support structure, signal system and other equipment.[39]

After the September 11, 2001 attacks, service on the BMT Broadway Line in Lower Manhattan, and R service, was suspended. J trains were extended beyond Broad Street via the Montague Street Tunnel to replace the R to Bay Ridge–95th Street at all times except late nights, when it only ran to Broad Street and a shuttle ran in Brooklyn between 95th and 36th Streets. J/Z skip-stop service was suspended.[40] Normal service on all three trains was restored on October 28.[41]

In May 2014, all trains began stopping at Alabama Avenue, presumably for the convenience of transit employees who work at the nearby East New York Yard and East New York Bus Depot.[42]

On June 14, 2015, weekend J service was extended back to Broad Street; this was proposed in July 2014 to improve weekend service between Lower Manhattan and Brooklyn.[43][44][45] Between 1990 and 2015, when weekend service terminated at Canal or Chambers Streets, Broad Street and the J/Z platforms at Fulton Street were two of the four New York City Subway stations that lacked full-time service (the remaining two being the platforms for the IRT 42nd Street Shuttle).

The following table shows the lines used by the J and Z, with shaded boxes indicating the route at the specified times:

For a more detailed station listing, see the articles on the lines listed above.