This article is about the association football club. For the rugby union club, see Racing 92.

Racing was founded in 1882 as a multi discipline sports club and is one of the oldest clubs in French football history. The team currently plays in the Championnat de France amateur 2, the fifth level of French football. Racing is managed by former football player Azzedine Meguellatti and hosts its home matches at the Stade Lucien-Choine, a smaller stadium next to the Stade Olympique Yves-du-Manoir in Colombes.[1][2]

Racing Club de France was founded in 1882 and was one of the founding members of Ligue 1 (French Division). The club have won one Ligue 1 title, which came during the 1935–36 season and five Coupe de France titles, which is tied for fourth-best among clubs. Racing also played in the USFSA-sanctioned league, which was France's first-ever league championship. Racing made its debut in the league in 1899 and won the league in 1907 having previously finished as runner-up in 1902 and 1903.

Notable players during the club's history include Roger Marche, Oscar Heisserer, Thadée Cisowski, Raoul Diagne, Luis Fernández, Maxime Bossis, David Ginola, Luís Sobrinho, Pierre Littbarski, Enzo Francescoli and Rubén Paz. Diagne spent a decade with the club from 1930–1940 and, in 1931, became the first black player to play in the French national team. He later played on the team at the 1938 FIFA World Cup alongside Abdelkader Ben Bouali, his Racing teammate, who was one of the first players of North African descent to play for the national team. Between 2009 and 2012, the club moved to nearby Levallois-Perret after the club reached a financial agreement with the commune. 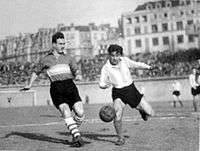 Racing Club de France is a historic team of French football, however, with a complicated history. During the 1900 Summer Olympics, the club hosted the athletic events at Croix-Catelan Stadium, which was the club's previous home.[3] Racing's days at its zenith were in the 1930s and 40s, when the club won the Division 1 in 1936, and the Coupe de France in 1936, 1939, 1940, 1945 and 1949. The club was also successful at the beginning of the 1960s, finishing runner-up of the first division in 1961 and 1962. However, midway through the decade, Racing became a significant focal point of the financial crisis that affected French football. The club's financial struggles resulted in its relegation to the lower divisions.

In 1982, businessman Jean-Luc Lagardère, who wanted to build a team of stars, decided to invest in the football club in order to mount a second major club in Paris alongside PSG, member of the elite since 1974. He thought first of a merger between Paris FC and Racing, which operates in Division 2, but in the absence of detailed information on the finances of the PFC, the leaders of the Racing Club de France refused. Lagardère then bought only the Paris FC, reflecting a debt of more than four million francs, renamed "Paris Racing 1" and gives him the same blue sky and white colors as its neighbor, with the agreement of its leaders. Lagardère gets especially the latter in case of maintenance of RP1 in D2, the two clubs will merge. This does not lack arrive: the first team of RP1, D2, is attached to Racing, while the reserve and youth teams of the former Paris FC are returned in the fourth division, under the name Paris FC 83.

The goals are ambitious, but their realization through promotion to the top flight. Lagardère injected funds to recruit experienced players in 1982 and 1983, as the Netherlands goalkeeper, defenders and Zvunka Renaut, Argentine Nogues (which only one year) and especially Algerian international Rabah Madjer, promising star landed in Algeria. Alain de Martigny is the coach of the team. The climb is acquired in 1984, during a phase of dam which opposes the first RCP Lyon (3-1 Colombes), then in Nice: the Eaglets won the first leg at the Stade du Ray (2-0 ), and mark the first in Colombes. The match is interrupted by a storm and must be replayed: the Nice score again early in the game, but the Racing before 30,000 spectators, scored three goals late in the game, getting an extension in which local hit back twice their victory (5-1) qualified for the third round against Saint-Etienne. At home in front of 40,000 fans, Racingmen fail to win, but Geoffroy-Guichard, they create the surprise sell their tickets in D1 and D2 send the Greens (0-2).

While he now shares the Parc des Princes with PSG, Racing nourishes important ambitions. Again strengthened for the 1984-1985 season, with striker Pierre Sither and international defender Philippe Mahut particular, the team finished bottom of the league despite replacing Alain de Martigny during the season by his player Victor Zvunka . Despite relegation, Lagardère made a new recruitment effort with the arrival of international Eugène Kabongo and Maxime Bossis. Team Racing, now led by René Hauss, won the title of champion of the second division in 1985-1986, confirming options Lagardère. For the rise in the elite recruitment are particularly flashy with Uruguayan international Enzo Francescoli, Pierre Littbarski German, French Thierry Tusseau and Luis Fernandez, emblematic player of Paris SG rake in gold. Yet the mayonnaise takes evil and the results are disappointing in terms of investments, since RCP is only thirteenth.

Lagardère, determined to lead his club in European Cup draws in 1987 the Portuguese coach Artur Jorge, just basking in his victory in the European Cup with FC Porto. He completed his group with Gérard Buscher, French international and Pascal Olmeta. Moreover, after a lobbying federal authorities, they allow Jean-Luc Lagardère, despite the settlement, adding a trademark in the name of the club: Racing becomes "Matra Racing" due to sponsorship reason of Matra. The results seem then finally followed in the 1987-1988 season: Racing climbs on the podium in mid-season. Affected by personal problems, Artur Jorge saw his team lose ground late in the season (she did not win a single victory in the last twelve days) and finished a disappointing seventh place. The public, moderately euphoric in the dead of winter (26,290 spectators against Bordeaux) deserted the Parc des Princes in spring with less than 7,000 spectators crowds. Despite its investments, Lagardère has not achieved the desired results and failed to attract an audience.

The 1988-1989 season marks the end of the illusions of Lagardère. The team made a run in the bottom of the table and only saved from relegation only on goal difference at the expense of Strasbourg. Tired of these failures, lack of public support and critical journalists to those they call him the "matraciens" shared with other employees of the nickname Matra Lagardère announced in the month of April that disengages. Deprived of his patron, the club becomes "Racing Paris 1" and must sell its major players to ensure its financial stability. Matra page turns on a failure, marked by 300 million francs invested in vain.

Since its relegation to the amateur levels, Racing is still seeking financial resources to develop the club. In December 2008, Georgios Kintis sought to buy the club, but failed to reach an agreement.[4] Ahead of the 2009–10 season, the club reached a financial agreement with the city of Levallois. The club's association and support from the commune resulted in Racing changing its name to Racing Club de France Levallois 92.[5] However, despite assistance from Levallois, in July 2010, Racing was administratively relegated to the Championnat de France amateur 2 by the DNCG after it was determined that the club had a €500,000 financial debt. On 21 November 2010, Racing Levallois and UJA Alfortville announced plans to merge, starting next season. In 2012, Racing came back to Colombes and was renamed Racing Club de France Colombes 92.

Below are the notable former players who have represented Racing in league and international competition since the club's foundation in 1882. To appear in the section below, a player must have played in at least 100 official matches for the club.