Montpellier Hérault Sport Club (French pronunciation: ​[mɔ̃pəlje eʁo spɔʁ klœb]; commonly referred to as Montpellier HSC or simply Montpellier) is a French association football club based in the city of Montpellier. The original club was founded in 1919, while the current incarnation was founded through a merger in 1974. Montpellier currently plays in Ligue 1, the top level of French football and plays its home matches at the Stade de la Mosson, located within the city. The first team is managed by former football player Rolland Courbis and captained by defender Hilton.

Montpellier was founded under the name Stade Olympique Montpelliérain (SO Montpellier) and played under the name for most of its existence. In 1989, after playing under various names, the club changed its name to its current form. Montpellier is one of the founding members of the first division of French football. Along with Marseille, Rennes, Sochaux and Nice, Montpellier is one of only a few clubs to have played in the inaugural 1932–33 season and is still playing in the first division. The club won Ligue 1 for the first time in the 2011–12 season. Montpellier's other honours to date include winning the Coupe de France in 1929 and 1990, and the UEFA Intertoto Cup in 1999.

Montpellier is owned by Louis Nicollin, a French entrepreneur, and has been since 1974. The club have produced several famous players in its history, most notably Laurent Blanc, who has served as manager of the France national team. Blanc is also the club's all-time leading goalscorer. Eric Cantona, Roger Milla and Carlos Valderrama are other players who have played in Montpellier's colours. In 2001, Montpellier introduced a women's team. 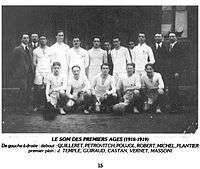 SO Montpellier team in 1919

Montpellier Hérault Sport Club was founded in 1919 under the name Stade Olympique Montpelliérain by the Association Générale Sportive Montpelliéraine (AGSM) (English: General Montpellier Sports Association), which consisted of a handful of wealthy and ambitious citizens of Montpellier. The city of Montpellier had been in the process of creating a sports club in the city since 1914, however, the idea died due to World War I. Upon its creation, the sports club mainly engaged in association football, rugby union, athletics, tennis, and boxing. The club's headquarters was located at the local Café de Paris and carried the colours of the city, red and white. After a few months of existence, SO Montpellier, under the advisement of its first president, merged with local club La Vie au Grand Air du Languedoc (VGAL), which was formed in August 1917 and had been solely dedicated to the sport of football.

The successful merger with VGAL and the acquisition of the club's players allowed Montpellier to easily adapt in the sport. The club spent its formative years playing mainly in the Division d'Honneur Sud-Est. In 1925, the club was managed by Scotsman Victor Gibson. That same year, Montpellier endured an internal crisis after the French Football Federation discovered that the club had been guilty of financial misfeasance. The club's president was suspended from football for five years and Montpellier were relegated for the first time. The resulting penalties led to the departure of several players. In an effort to rebuild, the club changed its name to Sports Olympiques Montpelliérains and recruited several new players, most notably Branislav Sekulić, Roger Rolhion, and the three Kramer brothers from Switzerland. The rebuilding process was immediate as the club returned to the Division d'Honneur after one season. In 1929, the club won its first major trophy, the Coupe de France. In the final, Montpellier faced FC Sète and recorded a 2–0 victory courtesy of goals from Auguste Kramer and Edmond Kramer.

In July 1930, the National Council of the French Football Federation voted 128–20 in support of professionalism in French football. Montpellier, along with most clubs from the south, were among the first clubs to adopt the new statute and, subsequently, became professional and were founding members of the new league. Ahead of the first campaign, Montpellier continued to perform well in the Coupe de France and reached the final for the second time in three years in 1931. Montpeller were unable to win its second title after being dismantled 3–0 in the final by Club Français. In the league's inaugural season, Montpellier finished mid-table in its group. After two more seasons in the league, Montpellier were relegated after finishing in 15th place in 1935. Soon after, it was revealed that the club was ₣370,000 in debt. The club's steering committee decided to dissolve the club and return to its former name Stade Olympique Montpelliérain, which resulted in the club's debt being erased in the eyes of the federation. The new club remained in Division 2 until earning promotion to Division 1 after winning the second division in 1946. In Montpellier's return to Division 1, the club struggled finishing in the bottom-half of the table in three straight seasons. In 1950, the club was back in Division 2 after finishing 17th in the 1949–50 French Division 1 season.

After a short return to Division 1, Montpellier were back in the second division in 1953. In the spring of 1953, the club's president, known by the surname Fox, brought in former French international Julien Darui to act as a player-coach. After nine months, Darui was dismissed from his position. After the departure of Darui, the club was ordered to pay up to ₣5 million after the federation discovered financial and accounting irregularities in the club's accounts. The federation subsequently gave Fox a lifetime ban from French football. In November 1957, a local clergyman, Ferdinand Bessède, was named as president of the club. Bessède quickly cleaned up the club's finances and, by 1961, Montpellier were back in Division 1. After an encouraging 8th-place finish in its return, Montpellier faltered back down to Division 2 after finishing in 19th place in the 1962–63 season. In 1966, Bessède, because of his duties as a clergyman, left his post. Montpellier, as a consequence, began to plummet. The club went back into debt and, also, became disassociated with its supporters after departing its long-time stadium and moving into a new stadium, which supporters were highly critical of. By 1969, Montpellier had lost its professional status and were playing in the Championnat de France amateur (CFA#. 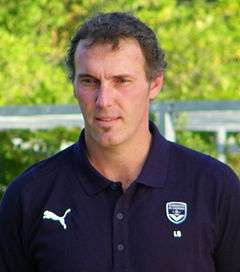 From 1969–1987, Montpellier underwent two name changes and spent its time playing in the CFA and Division 2, excluding one year back in Division 1 in 1981. In 1970, in an effort to avoid bankruptcy, the club merged with Montpellier Littoral and played under the name Montpellier Littoral Sport Club #MLSC) for four years. Despite the merger, the club still had financial troubles, which led to struggles domestically. The problems led to several players leaving the club for Formation Sportive de Nettoiement, an emerging sports outfit led by entrepreneur Louis Nicollin. On 1 June 1974, the club merged with up-and-coming club AS Paillade and changed its name to Montpellier Paillade Sport Club Littoral #MPSCL#. Like the previous merger, the merger with Paillade was ultimately unsuccessful as the club failed to make any progress. At the urging of local journalist Carlo Llorens, MPSCL merged with Nicollin's club, which had quickly become competitive. Nicollin dissolved his club, was installed as Montpellier's president, and brought his players and management over to Montpellier. After slowly ascending up the league system with managers such as Robert Nouzaret, Kader Firoud, and Jacques Bonnet, Montpellier returned to the first division under the leadership of Michel Mézy for the 1987–88 season.

In 1989, the club was renamed Montpellier Hérault Sport Club after it received financial support from the General Council of Hérault. With the club competing consistently in the first division, Montpellier sought to increase its competitiveness by hiring Aimé Jacquet. Jacquet had won three titles with Bordeaux in the 1980s. Montpellier also had a group of talented players, notably Laurent Blanc, Eric Cantona, Daniel Xuereb, Wilbert Suvrijn and Carlos Valderrama, among others. Jacquet only spent eight months in charge, which was a stint described by many as chaotic. A dressing room incident involving Cantona marred the club for most of the league season and, in February 1990, Jacquet was replaced by Mézy, who decided to return to the club. Under Mézy, Montpellier shifted back to its normal ways and surprised many by winning the Coupe de France. The club defeated the likes of Istres, Nancy, and Louhans-Cuiseaux before beating Racing Paris 2–1 in the final courtesy of extra time goals from Laurent Blanc and Kader Ferhaoui. After the success, Mézy left the club again and several of the club's players slowly began to depart for better opportunities. Despite the departures, Montpellier remained in Division 1 for the next decade before falling to Division 2 at the start of the new millennium. 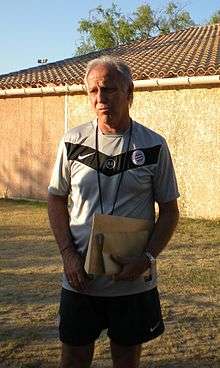 After a short return to Division 3, now called Ligue 3, from 2001 to 2004, Montpellier were back playing in Ligue 2. The club spent one season under Nouzaret and two seasons under Jean-François Domergue before finding stability with Rolland Courbis in 2007. In Courbis' second season in charge, boasted by several talented young players, such as Víctor Hugo Montaño, Tino Costa, Joris Marveaux and Johann Carrasso, he led the club back to Ligue 1 after finishing second. After the season, Courbis left the club to begin his prison sentence due to his involvement in the Olympique de Marseille corruption case and he was replaced by René Girard, With an abundance of young talent, Girard sought to bring in veterans to the club ahead of its return to Ligue 1. He successfully recruited Emir Spahić, Cyril Jeunechamp and Romain Pitau. Girard also brought back Nenad Džodić, who he installed as captain. In the club's return, Montpellier surprised many football pundits, locally and internationally, by finishing in fifth place and qualifying for the UEFA Europa League. Montpellier even topped the table at one point during the season.

In 2011–12, Montpellier won its first Ligue 1 title, finishing the season with 82 points, three points ahead runners-up Paris Saint-Germain. On 20 May 2012, in a game marred by stoppages for crowd violence, John Utaka scored a brace to secure a 2–1 victory over Auxerre and win the Ligue 1 title for Montpellier. Olivier Giroud, who finished the season with 21 goals and 9 assists, was the league's top goal scorer. Despite being tied on goals with Paris Saint-Germain attacker Nenê, he was named the league's top scorer by the Ligue de Football Professionnel due to finishing with more goals in open play.[1]

Montpellier supporters view Nîmes as their greatest enemies in a rivalry that began to become more important from the start of the 1980s when the Nîmois had regional supremacy. Louis Nicollin – who bought Montpellier in the 1970s – also showed himself to be happy to contribute to the rivalry by bring a number of ex-Nîmes players to the club, such as Michel Mézy. Mézy agreed to join Montpellier before the end of the 1978–79 season and was banned from playing for the remainder of the season by the Nîmes president after the signing of the deal. When Les Crocodiles and Montpellier found each other together in Ligue 2, the rivalry became yet stronger, as regional power began to shift towards Montpellier. The zenith of the rivalry came in the 1995–96 Coupe de France semi-final. Unfancied Nîmes, now in Ligue 2, came up against Ligue 1 Montpellier and beat them by a goal to nil. 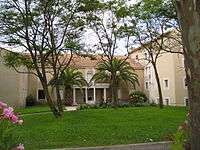