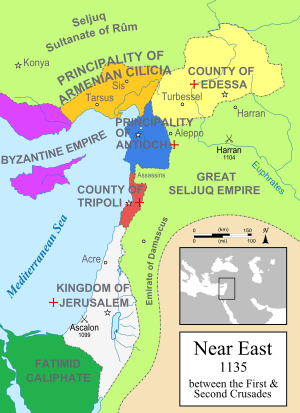 The Near East in 1135, with the Crusader states marked with red crosses 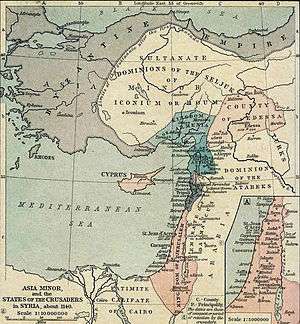 The Crusader states, also known as Outremer, were a number of mostly 12th- and 13th-century feudal states created by Western European crusaders in Asia Minor, Greece and the Holy Land, and during the Northern Crusades in the eastern Baltic area. The name also refers to other territorial gains (often small and short-lived) made by medieval Christendom against Muslim and pagan adversaries.

Beginning in the 7th century, Muslim rulers began expanding their territories into Christian Roman/Byzantine lands, conquering Egypt and the Levant, and gradually taking over all of North Africa, much of Southwest Asia, and most of the Iberian Peninsula. The Eastern Romans, or Byzantines, partially recovered lost territory on numerous occasions but over time gradually lost all but Anatolia and parts of Thrace and the Balkans. In the West, the Roman Catholic kingdoms of northern Iberia launched a series of campaigns known as the Reconquista to reconquer the peninsula from the Arabized Berbers known as Moors (who called it al-Andalus). The conquered Iberian principalities are not customarily called Crusader states, except for the Kingdom of Valencia, despite fitting the general criteria.[1]

In 1071, the Byzantine army was defeated by the Muslim Seljuk Turks at the Battle of Manzikert, resulting in the loss of most of Asia Minor. The situation represented a serious existential threat for the Eastern Orthodox Byzantine Empire. The Emperor sent a plea to the Pope in Rome to send military aid with the goal of restoring the formerly Christian territories to Christian rule. The result was a series of western European military campaigns into the eastern Mediterranean, known as the Crusades. Unfortunately for the Byzantines, the crusaders had no allegiance to the Byzantine Emperor and so established their own states in the conquered regions, including the heart of the Byzantine Empire itself.

The first four Crusader states were created in the Levant immediately after the First Crusade:

The Armenian Kingdom of Cilicia had its origins before the Crusades, but was granted the status of a kingdom by Pope Innocent III, and later became fully westernized by the (French) Lusignan dynasty.

During the Third Crusade, the Crusaders founded the Kingdom of Cyprus. Richard I of England conquered Cyprus on his way to Holy Land. He subsequently sold the island to the Knights Templar who were unable to maintain their hold because of a lack of resources and a rapacious attitude towards the local population which led to a series of popular uprisings. The Templars promptly returned the island to Richard who resold it to the displaced King of Jerusalem Guy of Lusignan in 1192. Guy went on to found a dynasty that lasted until 1489, when the widow of James II The Bastard, Queen Catherine Cornaro, a native of Venice, abdicated her throne in favour of the Republic of Venice, which annexed the island.[2] For much of its history under the Lusignan Kings, Cyprus was a prosperous Medieval Kingdom, a commercial and trading hub of Western Christendom in the Middle East.[3] The Kingdom's decline began when it became embroiled in the dispute between the Italian Merchant Republics of Genoa and Venice. Indeed, the Kingdom's decline can be traced to a disastrous war with Genoa in 1373–74 which ended with the Genoese occupying the principal port City of Famagusta. Eventually with the help of Venice, the Kingdom recovered Famagusta but by then it was too late and in any event, the Venetians had their own designs on the island. Venetian rule over Cyprus lasted for just over 80 years until 1571, when the Ottoman Empire under Sultan Selim II Sarkhosh invaded and captured the entire island. The battle for Cyprus between Venice and the Ottoman Empire was immortalized by William Shakespeare in his play Othello, most of which is set in the port city of Famagusta on the eastern shores of the island.

For more details on these states, see Frangokratia. 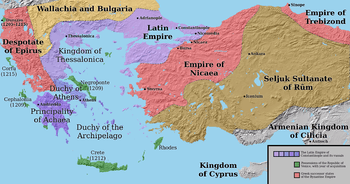 The Latin Empire, its vassals and the Greek successor states, c. 1204

After the Fourth Crusade, the territories of the Byzantine Empire were divided into several states, beginning the so-called "Francocracy" (Greek: Φραγκοκρατία) period:

The emblem used on the seals of the rulers of Jerusalem during the 12th century was a simplified depiction of the city itself, showing the tower of David between the Dome of the Rock and the Holy Sepulchre, surrounded by the city walls. The coins minted in Jerusalem during the 12th century show patriarchal crosses with various modifications. Coins minted under Henry I (r. 1192–1197) show a cross with four dots in the four quarters, but the Jerusalem cross proper appears only on a coin minted under John II (r. 1284/5).[4]

The crescent in pellet symbol is used in Crusader coins of the 12th century, in some cases duplicated in the four corners of a cross, as a variant of the cross-and-crosslets ("Jerusalem cross").[5] Many Crusader seals and coins show a crescent and a star (or blazing Sun) on either side of the ruler's head (as in the tradition of Sassanid coins), e.g. Bohemond III of Antioch, Richard I of England, Raymond VI, Count of Toulouse.[6] At the same time, the star in crescent is found on the obverse of Crusader coins, e.g. in coins of the County of Tripoli minted under Raymond II or III c. 1140s–1160s show an "eight-rayed star with pellets above crescent".[7] 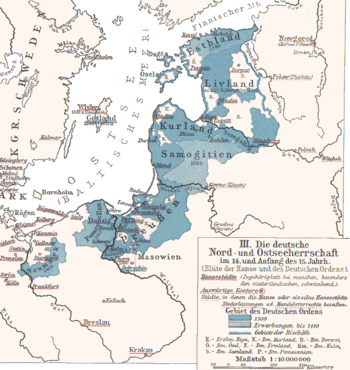 In the Baltic region, the indigenous tribes in the Middle Ages at first staunchly refused Christianity. In 1193, Pope Celestine III urged to a crusade against the heathens which included the Old Prussians, the Lithuanians and other tribes inhabiting Estonia, Latvia and East Prussia. This period of warfare is called the Northern Crusades.

In the aftermath of Northern Crusades William of Modena as Papal legate solved the disputes between the crusaders in Livonia and Prussia.