St. Philip Neri can be considered the father of Societies of Apostolic Life

A society of apostolic life is a group of men or women within the Catholic Church who have come together for a specific purpose and live fraternally. There are a number of apostolic societies, such as the Daughters of Charity of Saint Vincent de Paul, who make vows or other bonds defined in their constitutions to undertake to live the evangelical counsels of poverty, chastity, and obedience. (See Can. 731 §2.) However, unlike members of an institute of consecrated life (religious institute or secular institute), members of apostolic societies do not make religious vows--that is, "public vows."

This type of organization is defined in the Code of Canon Law under canons 731-746. Under the 1917 Code of Canon Law, which preceded the current one, this manner of life was referred to as a society of common life. 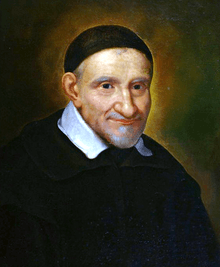 The work of various apostolic societies differs significantly from one another. They may focus on preaching, teaching, health-care, seminary education, foreign missions, retreat work, advocacy for justice, and many other objectives. Almost all apostolic societies had their origins in a need to be addressed that their founders recognized. Most apostolic societies focus on one or more aspects of the corporal and spiritual works of mercy.[2] Vincent de Paul's, Congregation of the Mission and the Daughters of Charity belong to a group of societies founded in the 16th and 17th century to respond to increasing poverty in France.[3] De Paul chose not to establish the Daughters of Charity of St. Vincent de Paul as a religious order, as at that time, women religious were "enclosed" (cloistered), and that state was "not compatible with the duties of their vocation".[2]

With the exception of the Oratorians, members can be reassigned among the various communities of the society as needed, and this lack of stability distinguishes this kind of society from some religious orders, such as the Benedictines, Poor Clares or Cistercians.

A community needs the written approval of a bishop to operate within his diocese. Clerics of a society of apostolic life are usually incardinated into the society and not the diocese, unless specified otherwise in its constitution (e.g. the Sulpicians who are members of both the Society and diocese). Each community has a right to its own oratory.

Members of a Society of Apostolic Life are allowed to own personal property, but must normally live in community with one another.

Canon Law (canon 731) speaks of such societies as being "comparable to institutes of consecrated life". They are regulated by the Congregation for Institutes of Consecrated Life and Societies of Apostolic Life.