Prayer, meditation and contemplation in Christianity

Prayer has been an essential part of Christianity since its earliest days. Prayer is an integral element of the Christian faith and permeates all forms of Christian worship.[1][2] Prayer in Christianity is the tradition of communicating with God, either in God's fullness or as one of the persons of the Trinity.[1]

In the early Church worship was inseparable from doctrine as reflected in the statement: lex orandi, lex credendi, i.e. the law of belief is the law of prayer.[3] The Lord's Prayer was an essential element of the meetings of early Christians, and over time a variety of Christian prayer emerged.[4][5]

Christian prayers are diverse and may vary among Christian denominations. They may be public prayers (e.g. as part of liturgy) or private prayers by an individual.[1] Prayers may be performed as petition (or intercession), thanksgiving, blessing (or benediction), praise or confession.[2][6]

A broad, three stage hierarchical characterization of prayer begins with vocal prayer, then moves on to a more structured form in terms of Christian meditation, and finally reaches the multiple layers of contemplative prayer.[7][8] Contemplative prayer follows Christian meditation and is the highest form of prayer which aims to achieve a close spiritual union with God. Both Eastern and Western Christian teachings have emphasized the use of meditative prayers as an element in increasing one's knowledge of Christ.[9][10][11][12]

Development of the three stages of prayer

Prayer and the reading of Scripture were important elements of Early Christianity. In the early Church worship was inseparable from doctrine as reflected in the statement: lex orandi, lex credendi, i.e. the law of belief is the law of prayer.[3] Early Christian liturgies highlight the importance of prayer.[13]

The Lord's Prayer was an essential element in the meetings held by the very early Christians, and it was spread by them as they preached Christianity in new lands.[4] Over time, a variety of prayers were developed as the production of early Christian literature intensified.[6]

By the 3rd century Origen had advanced the view of "Scripture as a sacrament".[14] Origen's methods of interpreting Scripture and praying on them were learned by Ambrose of Milan, who towards the end of the 4th century taught them to Saint Augustine, thereby introducing them into the monastic traditions of the Western Church thereafter.[15][16]

Early models of Christian monastic life emerged in the 4th century, as the Desert Fathers began to seek God in the deserts of Palestine and Egypt.[17][18] These early communities gave rise to the tradition of a Christian life of "constant prayer" in a monastic setting which eventually resulted in meditative practices in the Eastern Church during the Byzantine period.[18]

Meditation in the Middle Ages

During the Middle Ages, the monastic traditions of both Western and Eastern Christianity moved beyond vocal prayer to Christian meditation. These progressions resulted in two distinct and different meditative practices: Lectio Divina in the West and hesychasm in the East. Hesychasm involves the repetition of the Jesus Prayer, but Lectio Divina uses different Scripture passages at different times and although a passage may be repeated a few times, Lectio Divina is not repetitive in nature.[18][19]

In the Western Church, by the 6th century, Saint Benedict and Pope Gregory I had initiated the formal methods of scriptural prayer called Lectio Divina.[20] With the motto Ora et labora (i.e. pray and work), daily life in a Benedictine monastery consisted of three elements: liturgical prayer, manual labor and Lectio Divina, a quiet prayerful reading of the Bible.[21] This slow and thoughtful reading of Scripture, and the ensuing pondering of its meaning, was their meditation.[22]

Early in the 12th century, Saint Bernard of Clairvaux was instrumental in re-emphasizing the importance of Lectio Divina within the Cistercian order.[23] Bernard also emphasized the role of the Holy Spirit in contemplative prayer and compared it to a kiss by the Eternal Father which allows a union with God.[24]

The progression from Bible reading, to meditation, to loving regard for God, was first formally described by Guigo II, a Carthusian monk who died late in the 12th century.[25] Guigo II's book The Ladder of Monks is considered the first description of methodical prayer in the western mystical tradition.[26]

In Eastern Christianity, the monastic traditions of "constant prayer" that traced back to the Desert Fathers and Evagrius Pontikos established the practice of hesychasm and influenced John Climacus' book The Ladder of Divine Ascent by the 7th century.[27] These meditative prayers were promoted and supported by Saint Gregory Palamas in the 14th century.[11][18]

From meditation to contemplative prayer

In the Western Church, during the 15th century, reforms of the clergy and monastic settings were undertaken by the two Venetians, Lorenzo Giustiniani and Louis Barbo. Both men considered methodical prayer and meditation as essential tools for the reforms they were undertaking.[28] Barbo, who died in 1443, wrote a treatise on prayer titled Forma orationis et meditionis otherwise known as Modus meditandi. He described three types of prayer; vocal prayer, best suited for beginners; meditation, oriented towards those who are more advanced; and contemplation as the highest form of prayer, only obtainable after the meditation stage. Based on the request of Pope Eugene IV, Barbo introduced these methods to Valladolid, Spain and by the end of the 15th century they were being used at the abbey of Montserrat. These methods then influenced Garcias de Cisneros, who in turn influenced Ignatius of Loyola.[29][30]

The Eastern Orthodox Church has a similar three level hierarchy of prayer.[31][32] The first level prayer is again vocal prayer, the second level is meditation (also called "inward prayer" or "discursive prayer") and the third level is contemplative prayer in which a much closer relationship with God is cultivated.[31] 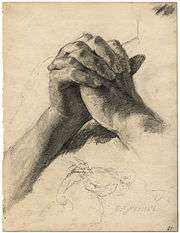 Prayer is an integral element of the Christian faith and permeates all forms of Christian worship.[1][2] Prayer in Christianity is the tradition of communicating with God, either in God's fullness or as one of the persons of the Trinity.[1] Christian prayers are diverse and may vary among Christian denominations. They may be public prayers (e.g. as part of liturgy) or private prayers by an individual.[1]

The most common prayer among Christians is the Lord's Prayer, which according to the gospel accounts (e.g. Matthew 6:9-13) is how Jesus taught his disciples to pray.[33] The Lord's prayer is a model for prayers of adoration, confession and petition in Christianity.[33]

The first centuries of Christianity witnessed an intense growth in religious literature and these often included prayers.[6] The prayers recorded in early Christian literature can be categorized into six types: petition (including intercession), thanksgiving, blessing (or benediction), praise, confession and finally a small number of lamentations.[6] The first five of these types have persisted throughout the centuries and been expressed in a large number of Christian prayers.[2] However some prayers may combine some of these forms, e.g. praise and thanksgiving, etc.[2][6]

A Carmelite nun in her cell, meditating on the Bible.

Christian meditation is a structured attempt to get in touch with and deliberately reflect upon the revelations of God.[34] The word meditation comes from the Latin word meditārī, which has a range of meanings including to reflect on, to study and to practice. Christian meditation is the process of deliberately focusing on specific thoughts (such as a bible passage) and reflecting on their meaning in the context of the love of God.[35]

In the 20th century the practice of Lectio Divina moved out of monastic settings and reached lay Christians in the Western Church.[36] Separately, among Roman Catholics, meditation on the Rosary remains one of the most widespread and popular spiritual practices.[37]

While meditation in the Western Church was being built on the foundations of Lectio Divina, a different form of meditative practice emerged within Eastern Christianity during the Byzantine period, as the practice of hesychasm gained a following, specially on Mount Athos in Greece. Hesychasm was promoted by Saint Gregory Palamas in the 14th century and remains a part of Eastern Christian spirituality.[11][38]

Both Eastern and Western Christian teachings have emphasized the use of Christian meditation as an element in increasing one's knowledge of Christ.[9][10][11][12] Christian meditation aims to heighten the personal relationship based on the love of God that marks Christian communion.[39][40] It is the middle level in a broad three stage characterization of prayer: it involves more reflection than first level vocal prayer, but is more structured than the multiple layers of contemplation in Christianity.[7]

At times there may be no clear-cut boundary between Christian meditation and Christian contemplation, and they overlap. Meditation serves as a foundation on which the contemplative life stands, the practice by which someone begins the state of contemplation.[41]

In discursive meditation, mind and imagination and other faculties are actively employed in an effort to understand our relationship with God.[42][43] In contemplative prayer, this activity is curtailed, so that contemplation has been described as "a gaze of faith", "a silent love".[44]