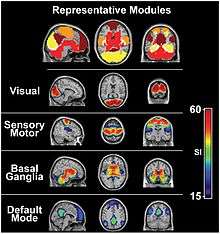 The visual system and the somatosensory system are active even during resting state fMRI.

The sensory nervous system is a part of the nervous system responsible for processing sensory information. A sensory system consists of sensory receptors, neural pathways, and parts of the brain involved in sensory perception. Commonly recognized sensory systems are those for vision, auditory (hearing), somatic sensation (touch), gustatory (taste), olfaction (smell) and vestibular (balance/movement). In short, senses are transducers from the physical world to the realm of the mind where we interpret the information, creating our perception of the world around us.[1]

Sensory systems code for four aspects of a stimulus; type (modality), intensity, location, and duration. Arrival time of a sound pulse and phase differences of continuous sound are used for localization of sound sources. Certain receptors are sensitive to certain types of stimuli (for example, different mechanoreceptors respond best to different kinds of touch stimuli, like sharp or blunt objects). Receptors send impulses in certain patterns to send information about the intensity of a stimulus (for example, how loud a sound is). The location of the receptor that is stimulated gives the brain information about the location of the stimulus (for example, stimulating a mechanoreceptor in a finger will send information to the brain about that finger). The duration of the stimulus (how long it lasts) is conveyed by firing patterns of receptors. These impulses are transmitted to the brain through afferent neurons.

While there is debate among neurologists as to the specific number of senses due to differing definitions of what constitutes a sense, Gautama Buddha and Aristotle classified five ‘traditional’ human senses which have become universally accepted: touch, taste, smell, sight, and hearing. Other senses that have been well-accepted in most mammals, including humans, include nociception, equilibrioception, kinaesthesia, and thermoception. Furthermore, some non-human animals have been shown to possess alternate senses, including magnetoception and electroreception.[3]

The initialization of sensation stems from the response of a specific receptor to a physical stimulus. The receptors which react to the stimulus and initiate the process of sensation are commonly characterized in four distinct categories: chemoreceptors, photoreceptors, mechanoreceptors, and thermoreceptors. All receptors receive distinct physical stimuli and transduce the signal into an electrical action potential. This action potential then travels along afferent neurons to specific brain regions where it is processed and interpreted.[4]

Chemoreceptors, or chemosensors, detect certain chemical stimuli and transduce that signal into an electrical action potential. There are two primary types of chemoreceptors:

Photoreceptors are capable of phototransduction, a process which converts light (electromagnetic radiation) into, among other types of energy, a membrane potential. There are three primary types of photoreceptors: Cones are photoreceptors which respond significantly to color. In humans the three different types of cones correspond with a primary response to short wavelength (blue), medium wavelength (green), and long wavelength (yellow/red).[6] Rods are photoreceptors which are very sensitive to the intensity of light, allowing for vision in dim lighting. The concentrations and ratio of rods to cones is strongly correlated with whether an animal is diurnal or nocturnal. In humans rods outnumber cones by approximately 20:1, while in nocturnal animals, such as the tawny owl, the ratio is closer to 1000:1.[6] Ganglion Cells reside in the adrenal medulla and retina where they are involved in the sympathetic response. Of the ~1.3 million ganglion cells present in the retina, 1-2% are believed to be photosensitive.[7]

Thermoreceptors are sensory receptors which respond to varying temperatures. While the mechanisms through which these receptors operate is unclear, recent discoveries have shown that mammals have at least two distinct types of thermoreceptors:[9]

Nociceptors respond to potentially damaging stimuli by sending signals to the spinal cord and brain. This process, called nociception, usually causes the perception of pain.[10] They are found in internal organs as well as on the surface of the body. Nociceptors detect different kinds of damaging stimuli or actual damage. Those that only respond when tissues are damaged are known as "sleeping" or "silent" nociceptors.

Located in the parietal lobe, the somatosensory cortex is the primary receptive area for the sense of touch. This cortex is further divided into Brodmann areas 1, 2, and 3. Brodmann area 3 is considered the primary processing center of the somatosensory cortex as it receives significantly more input from the thalamus, has neurons highly responsive to somatosensory stimuli, and can evoke somatic sensations through electrical stimulation. Areas 1 and 2 receive most of their input from area 3.

A stimulus modality (sensory modality) is a type of physical phenomenon that can be sensed. Examples are temperature, taste, sound, and pressure. The type of sensory receptor activated by a stimulus plays the primary role in coding the stimulus modality.

In the memory-prediction framework, Jeff Hawkins mentions a correspondence between the six layers of the cerebral cortex and the six layers of the optic tract of the visual system. The visual cortex has areas labelled V1, V2, V3, V4, V5, MT, IT, etc. Thus Area V1 mentioned below, is meant to signify only one class of cells in the brain, for which there can be many other cells which are also engaged in vision.

Hawkins lays out a scheme for the analogous modalities of the sensory system. Note that there can be many types of senses, some not mentioned here. In particular, for humans, there will be cells which can be labelled as belonging to V1, V2 A1, A2, etc.:

The human eye is the first element of a sensory system: in this case, vision, for the visual system.

Visual Area 1, or V1, is used for vision, via the visual system to the primary visual cortex.

The sense of sight or vision enables us to see our external environment. It provides the richest and most detailed source of sensory information. It tells us the things that are around us; gives their locations; and provides three-dimensional images of them (in color and motion). The stimulus that provides all this information is light (the part of the electromagnetic spectrum with wavelength in the range of 400 to 700nm). In mammals, the visual stimulus is detected by photoreceptors in specialized sense organ called eyes. Many have a pair of eyes located anteriorly in the head. They are like television camera producing continuous, ever-changing images of what they see. Eye: the Organ of Sight Each eye is a spherical organ known as the eyeball. It is located in a socket in the skull. Only a small portion of the front part of the eyeball can be seen. This part is protected by an upper and lower eyelid. Tear glands under the upper eyelid produce a saline tear fluid (made up of sodium chloride and hydrogen carbonate). We blink automatically every two to ten seconds. This action spreads tear fluid over the eye surfaces cleaning and keeping them moist. Tear fluid also contains a lysozyme which attacks germs. This fluid drains from the surface of the eyes into the nasal cavity via tear ducts. Each eyeball is attached to the eye sockets by six sets of muscles. These muscles enable the eye to move in many directions, thus widening the field of vision. Among these muscles is a single thicj nerve, the optic nerve, which connects the eye to the brain. Structure of the Eye The inside of the eyeball is a fluid-filled hollow structure. Functionally, it is most important structures are the lens and retina The wall of the eyeball consist of three layers: • The outermost sclera, • The middle choroid, and • The innermost retina. The sclera is a white tough layer of connective tissue which protects and maintains the shape of the eyeball. It bulges out in front to form the transparent cornea. At the back, it is perforated by the optic nerve. A thin transparent membrane, the conjunctiva, lines the inside of the eyelids and covers the cornea protectively. The choroid consist of black pigmented cells, and has a rich supply of blood capillaries. In front, it forms the muscular ciliary body and the iris. Suspensory ligaments from the ciliary body hold the lens in place. The lens is a transparent, biconvex structure which is flexible. The space in front of the lens is filled with water aqueous humor. The much bigger space behind is filled with jelly-like vitreous humor, which helps to maintain the spherical shape of the eyeball. The iris is the colored opaque disc of muscular tissue that lies in front of the lens. The hole in the center of the iris is called pupil. Light enters the eye through the pupil. The retina is the light-sensitive inside layer at the back of the eyeball. It gets it nourishment from the capillaries in the choroid. It contains numerous photoreceptors which are of two types:

The rods which are extremely sensitive to light and are responsible for black and white vision (and night vision); and

The cones which are responsible for color vision.

These sensory cells are partly embedded in the pigmented cells of the choroid. They synapse with bipolar neurons which synapse with sensory neurons that are part of the optic nerve

Auditory Area 1, or A1, is for hearing, via the auditory system, the primary auditory cortex.

Gustatory Area 1, or G1, is used for taste. Taste does not refer to the flavor of food, because the flavor of the food refers to the odor. The five qualities of taste include sourness, bitterness, sweetness, saltiness, and a recently discovered protein taste quality called umami.

The Human sensory system consists of the following sub-systems: