The reverse Polish scheme was proposed in 1954 by Burks, Warren, and Wright[4] and was independently reinvented by F. L. Bauer and E. W. Dijkstra in the early 1960s to reduce computer memory access and utilize the stack to evaluate expressions. The algorithms and notation for this scheme were extended by Australian philosopher and computer scientist Charles Hamblin in the mid-1950s.[5][6]

During the 1970s and 1980s, RPN was well-known to many calculator users, as Hewlett-Packard used it in their pioneering 9100A[7] and HP-35 scientific calculators, the succeeding Voyager series - and also the "cult" HP-12C financial calculator.[8]

In computer science, postfix notation is often used in stack-based and concatenative programming languages. It is also common in dataflow and pipeline-based systems, including Unix pipelines.

Most of what follows is about binary operators. An example of a unary operator whose standard notation uses postfix is the factorial.

The algorithm for evaluating any postfix expression is fairly straightforward:

The expression is evaluated left-to-right, with the inputs interpreted as shown in the following table (the Stack is the list of values the algorithm is "keeping track of" after the Operation given in the middle column has taken place):

When a computation is finished, its result remains as the top (and only) value in the stack; in this case, 14.

The above example could be rewritten by following the "chain calculation" method described by HP for their series of RPN calculators:[12]

As was demonstrated in the Algebraic mode, it is usually easier (fewer keystrokes) in working a problem like this to begin with the arithmetic operations inside the parentheses first.

Edsger Dijkstra invented the shunting-yard algorithm to convert infix expressions to postfix (RPN), so named because its operation resembles that of a railroad shunting yard.

The first computers to implement architectures enabling RPN were the English Electric Company's KDF9 machine, which was announced in 1960 and delivered (i.e. made available commercially) in 1963, and the American Burroughs B5000, announced in 1961 and also delivered in 1963. One of the designers of the B5000, Robert S. Barton, later wrote that he developed RPN independently of Hamblin sometime in 1958 after reading a 1954 textbook on symbolic logic by Irving Copi,[13][14][15] where he found a reference to Polish notation,[15] which made him read the works of Jan Łukasiewicz as well,[15] and before he was aware of Hamblin's work. Designed by Robert "Bob" Appleby Ragen,[16] Friden introduced RPN to the desktop calculator market with the EC-130 supporting a four-level stack[3] in June 1963. The successor EC-132 added a square root function in April 1965. Around 1966, the Monroe Epic calculator supported an unnamed input scheme resembling RPN as well.[3] 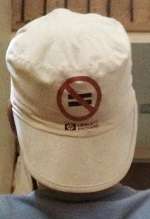 A promotional Hewlett-Packard "No Equals" hat from the 1980s - both a boast and a reference to RPN.

Hewlett-Packard engineers designed the 9100A Desktop Calculator in 1968 with RPN[7] with only three stack levels,[17] an RPN variant later referred to as three-level RPN. This calculator popularized RPN among the scientific and engineering communities. The HP-35, the world's first handheld scientific calculator,[7] introduced the classical four-level RPN in 1972.[18] HP used RPN on every handheld calculator it sold, whether scientific, financial, or programmable, until it introduced the HP-10 adding machine calculator in 1977. By this time HP was the leading manufacturer of calculators for professionals, including engineers and accountants.

Around 1987, HP introduced RPL, an object-oriented successor to RPN. It deviates from classical RPN by utilizing a stack only limited by the amount of available memory (instead of three or four fixed levels) and which can hold all kinds of data objects (including symbols, strings, lists, matrices, graphics, programs, etc.) instead of just numbers. It also changed the behaviour of the stack to no longer duplicate the top register on drops (since in an unlimited stack there is no longer a top register) and the behaviour of the ↵ Enter key so that it no longer duplicates values into Y under certain conditions, both part of the specific ruleset of the automatic operational stack in classical RPN in order to ease some calculations and to save keystrokes, but which had shown to also sometimes cause confusion among users not familiar with these properties. From 1990 to 2003 HP manufactured the HP-48 series of graphing RPL calculators and in 2006 introduced the HP 50g.

As of 2011, Hewlett-Packard was offering the calculator models 12C, 12C Platinum, 17bII+, 20b, 30b, 33s, 35s, 48gII (RPL) and 50g (RPL) which support RPN.[19] While calculators emulating classical models continue to support classical RPN, new RPN models feature a variant of RPN, where the Enter key behaves as in RPL. This latter variant is sometimes known as entry RPN.[20] In 2013, the HP Prime introduced a 128-level form of entry RPN called Advanced RPN. By early 2016, only the 12C, 12C Platinum, 17bii+, 35s and Prime remain active HP models supporting RPN.

The community-developed calculators WP 31S and WP 34S, which are based on the HP 20b/HP 30b hardware platform, support Hewlett-Packard-style classical RPN with either a four- or an eight-level stack. An eight-level stack was already suggested by John A. Ball in 1978.[3]

Prinz and Prinztronic were own-brand trade names of the British Dixons photographic and electronic goods stores retail chain, which was later rebranded as Currys Digital stores, and became part of DSG International. A variety of calculator models was sold in the 1970s under the Prinztronic brand, all made for them by other companies.

Among these was the PROGRAM Programmable Scientific Calculator which featured RPN.

Soviet programmable calculators (MK-52, MK-61, B3-34 and earlier B3-21[23] models) used RPN for both automatic mode and programming. Modern Russian calculators MK-161[24] and MK-152,[25] designed and manufactured in Novosibirsk since 2007 and offered by Semico, are backward compatible with them. Their extended architecture is also based on reverse Polish notation.