Richard Nelson Frye (January 10, 1920 – March 27, 2014) was an American scholar of Iranian and Central Asian Studies, and Aga Khan Professor Emeritus of Iranian Studies at Harvard University.[1][2] His professional areas of interest were Iranian philology and the history of Iran and Central Asia before 1000 CE.

Born in Birmingham, Alabama, to a family of immigrants from Sweden, "Freij" had four children, his second marriage being to an Iranian-Assyrian scholar, Eden Naby, from Urmia, Iran who teaches at Columbia University. He spoke fluent Russian, German, Arabic, Persian, Pashto, French, Uzbek, and Turkish,[3] and had extensive knowledge of Avestan, Pahlavi, Sogdian, and other Iranian languages and dialects, both extinct and current.

Although Frye is mostly known for his works about Iran and Iranian Central Asia, but the scope of his studies was much wider and includes Byzantine, Caucasian, and Ottoman history, Eastern Turkistan, ancient and medieval Iranian art, Islamic art, Sufism, Chinese and Japanese archeology, and a variety of Iranian and non-Iranian languages including Avestan, Old Persian, Middle Persian, Parthian, Sogdian, Khotanese, and Bactrian, New Persian, Arabic, Turkish, and even Chinese, beside research languages which include French, German, Italian, and Russian.[4]

Frye was born in Birmingham, Alabama. He first attended the University of Illinois, where he received an BA in history and philosophy in 1939. He received his MA from Harvard University in 1940 and his PhD from Harvard in 1946, in Asiatic history.

Frye served with the Office of Strategic Services during World War II. He was stationed in Afghanistan and traveled extensively in the Middle East, Central Asia, and South Asia. In 1948 he visited Sar Masshad, and was the first European to find and report the existence of the Gur-e Dokhtar tomb (meaning "Tomb of the Maiden" in Persian

He returned to Harvard to teach. He was a member of the Harvard faculty from 1948 until 1990. He is now a professor emeritus at Harvard. He has also served as faculty, guest lecturer, or visiting scholar at:

Professor Frye helped found the Center for Middle Eastern Studies[5] at Harvard, the first Iranian studies program in America. He also served as Director of the Asia Institute in Shiraz (1970–1975), was on the Board of Trustees of the Pahlavi University at Shiraz (1974–78), and Chairman, Committee on Inner Asian Studies, at Harvard (1983–89), and as Editor of the Bulletin of the Asia Institute (1970–1975 and 1987–99).

Among Frye's students were Annemarie Schimmel,[6] Oleg Grabar,[7] Frank Huddle (former US Ambassador to Tajikistan), John Limbert, and Michael Crichton, whose Hollywood film The 13th Warrior is loosely based on Frye's translation of Ibn Fadlan's account of his travels up the river Volga.[8]

Frye was also directly responsible for inviting Iranian scholars as distinguished visiting fellows to Harvard University, under a fellowship program initiated by Henry Kissinger. Examples of such guests include Mehdi Haeri Yazdi (1923–1999), Sadegh Choubak, Jalal al Ahmad, and others.[9]

Frye as a proponent of Persian culture 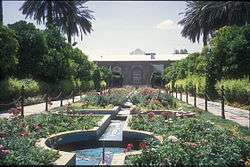 The Qavam House, where the famous Shiraz University Asia Institute was founded. Frye headed the institute from 1969 to 1974.

Frye felt that Persian civilization was under-appreciated by other Muslims, and Arab Muslims in particular. Frye wrote:

Arabs no longer understand the role of Iran and the Persian language in the formation of Islamic culture. Perhaps they wish to forget the past, but in so doing they remove the bases of their own spiritual, moral and cultural being...without the heritage of the past and a healthy respect for it...there is little chance for stability and proper growth.
— R. N. Frye, The Golden Age of Persia, London: Butler & Tanner Ltd., 1989, page 236

Iranians responded enthusiastically to his appreciation.

A ceremony was held in Iran on June 27, 2004 to pay tribute to the six-decade endeavors of Professor Frye on his lifetime contribution to Iranian Studies, research work on the Persian language, and the history and culture of Iran.

In his will, Professor Frye expressed his wish to be buried next to the Zayandeh River in Isfahan. This request was approved by Iranian president Mahmoud Ahmadinejad in September 2007.[11] Two other American scholars of Iranian Studies, Arthur Pope and Phyllis Ackerman, are already buried there. In 2010, a house in Isfahan was gifted by Iranian government to Professor Frye in recognition of his services to Iranian studies.[12]

On June 8, 2014, the family of Dr. Frye decided to cremate his remains after waiting more than 2 months for official Iranian permission to bury him in Isfahan. His death coincided with growing resentment by Iranian hard-liners over signs of reconciliation with the United States after decades of estrangement. It is not clear what the family intended to do with his ashes. [13]

Frye as a public speaker

Frye was a popular public speaker at numerous Iran-related gatherings. In 2005, he spoke at UCLA, encouraging the Iranians present to cherish their culture and identity.[14][15] In 2004, he spoke at an architectural conference in Tehran, expressing his dismay at hasty modernization that ignores the beauties of traditional Iranian architectural styles (see Architecture of Tehran).