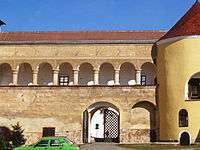 The Veterinary School's Anatomical Theatre of the Humboldt University of Berlin before and after its restoration. 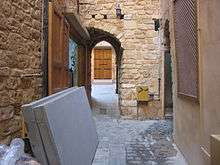 Rebuilding of the historical city centre of Sidon in Lebanon after the civil war.

Building restoration describes a particular treatment approach and philosophy within the field of architectural conservation. According to the U.S. Secretary of Interior's standards, "Restoration is said as the act or process of accurately depicting the form, features, and character of a property as it appeared at a particular period of time by means of the removal of features from other periods in its history and reconstruction of missing features from the restoration period. The limited and sensitive upgrading of mechanical, electrical, and plumbing systems and other code-required work to make properties functional is appropriate within a restoration project."[1] In the United States restoration is different from preservation (American English, conservation in British English) by allowing the removal of historic materials to create an accurate portrayal of a particular time period, not necessarily the original or final time periods. 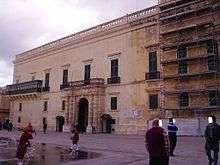 The Grandmaster's Palace in Valletta, Malta being restored in 2011.

In the field of historic preservation, building restoration is the action or process of accurately revealing, recovering or representing the state of a historic building, as it appeared at a particular period in its history, while protecting its heritage value. Restoration work may be performed to reverse decay, or alterations made to the building(s)

Since Historic Building Conservation is more about fostering a deep appreciation for these famous structures and learning more about why they exist, rather than just keeping historic structures standing tall and looking as beautiful as ever, true historic building preservation aims for a high level of authenticity, accurately replicating historic materials and techniques as much as possible, ideally using modern techniques only in a concealed manner where they will not compromise the historic character of the structure's appearance.[2]

For instance a restoration might involve the replacement of outdated heating and cooling systems with newer ones, or the installation of climate controls that never existed at the time of building after careful study. Tsarskoye Selo, the complex of former royal palaces outside St Petersburg in Russia is an example of this sort of work.

Exterior and interior paint colors present similar problems over time. Air pollution, acid rain, and sun take a toll, and often many layers different paint exist. Historic paint analysis of old paint layers now allow a corresponding chemical recipe and color to be re-produced. But this is often only a beginning as many of the original materials are either unstable or in many cases environmentally unsound. Many eighteenth century greens were made with arsenic and lead, materials no longer allowed in paints. Another problem occurs when the original pigment came from a material no longer available. For example, in the early to mid-19th century, some browns were produced from bits of ground mummies. In cases like this the standards allow other materials with similar appearance to be used and organizations like Britain's National Trust for Places of Historic Interest or Natural Beauty will work with a historic paint color re-creator s to replicate the antique paints in durable, stable, and environmentally safe materials. In the United States the National Trust for Historic Preservation is a helpful resource. The polychrome painted interiors of the Vermont State House and Boston Public Library are examples of this type of heritage restoration.

Secretary of Interiors standards for restoration 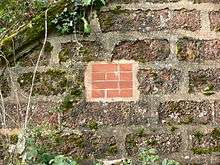 Not a good example of restoration, a glaringly different material of bricks in a stone wall. Attribution: Paul Dickson

In the United States, the Secretary of Interior is the head of the National Park Service which owns and maintains thousands of historic buildings and has been a leader in historic preservation for over 100 years. The standards were developed in 1975 and updated in 1992.[3] The standards deal with the "...materials, features, finishes, spaces, and spatial relationships..."[4] of historic buildings and are divided into preservation, rehabilitating, restoration and reconstruction. It helps to understand what building restoration is in context with the other standards:

The first steps in a restoration to the Secretary's standards are to study the building and choose a time period for the restoration. The new use of the building should be consistent with the original use or at least with the time period of the restoration. Materials which were added after the chosen time period must be documented and then may be removed while preserving and repairing the appropriate materials. Materials missing may be reconstructed to "...match the old in design, color, texture, and, where possible, materials." which are evidence based. Modern chemical and physical treatments may be gently used if they do not damage the historic materials, and archaeological resources will be preserved or mitigated. The standards recognize that there are inherent conflicts with modern codes and regulations for energy efficiency, health, safety, and accessibility. The standards allow sensitive alterations of historic buildings to meet the spirit of the codes and regulations, if necessary.

Storm restoration is the restoring of a building due to damage from a severe storm. Most damage is caused by strong wind gusts or hail, but may also include large amounts of rainfall, lightning strikes,[5] as well as extreme storms such as tornadoes and hurricanes. The majority of storm damage occurs on roofs, sides of structures, and in basements, but over time causes damage to the interior. Unlike heritage restoration, storm restoration takes place on buildings with no historic significance as well.[6]