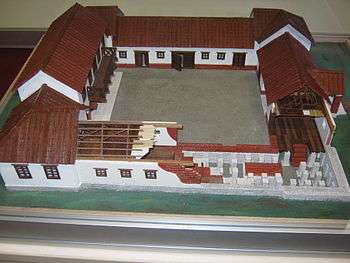 Roman Villa Rustica Model. Remnants of these types of villas can be found in the vicinity of Valjevo, Serbia

A Roman villa was a country house built for the upper class in the Roman Republic and the Roman Empire.

Pliny the Elder (23-79) distinguished two kinds of villas: the villa urbana, a country seat that could easily be reached from Rome (or another city) for a night or two; and the villa rustica, the farm-house estate permanently occupied by the servants who generally had charge of the estate. The villa rustica centered on the villa itself, perhaps only seasonally occupied. Under the Empire a concentration of Imperial villas grew up near the Bay of Naples, especially on the Isle of Capri, at Monte Circeo on the coast and at Antium (Anzio). Wealthy Romans escaped the summer heat in the hills round Rome, especially around Frascati (cf. Hadrian's Villa). Cicero allegedly possessed no fewer than seven villas, the oldest of them, which he inherited, near Arpinum in Latium. Pliny the Younger had three or four, of which the example near Laurentium is the best known from his descriptions.

The Empire contained many kinds of villas, not all of them lavishly appointed with mosaic floors and frescoes. In the provinces, any country house with some decorative features in the Roman style may be called a "villa" by modern scholars.[1] Some were pleasure houses such as those — like Hadrian's Villa at Tivoli— that were sited in the cool hills within easy reach of Rome or — like the Villa of the Papyri at Herculaneum— on picturesque sites overlooking the Bay of Naples. Some villas were more like the country houses of England or Poland, the visible seat of power of a local magnate, such as the famous palace rediscovered at Fishbourne in Sussex. Suburban villas on the edge of cities also occurred, such as the Middle and Late Republican villas that encroached on the Campus Martius, at that time on the edge of Rome, and which can be also seen outside the city walls of Pompeii. These early suburban villas, such as the one at Rome's Auditorium site[2] or at Grottarossa in Rome, demonstrate the antiquity and heritage of the villa suburbana in Central Italy.[3] It is possible that these early, suburban villas were also in fact the seats of power (maybe even palaces) of regional strongmen or heads of important families (gentes). A third type of villa provided the organizational center of the large holdings called latifundia, which produced and exported agricultural produce; such villas might lack luxuries. By the 4th century, villa could simply connote an agricultural holding: Jerome translated in the Gospel of Mark (xiv, 32) chorion, describing the olive grove of Gethsemane, with villa, without an inference that there were any dwellings there at all.[4]

Architecture of the villa complex 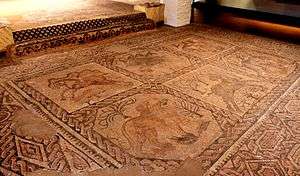 By the first century BC, the "classic" villa took many architectural forms, with many examples employing atrium or peristyle, for enclosed spaces open to light and air. Upper class, wealthy Roman citizens in the countryside around Rome and throughout the Empire lived in villa complexes, the accommodation for rural farms. The villa-complex consisted of three parts.[5]

Villas were often furnished with plumbed bathing facilities and many would have had an under-floor central heating known as the hypocaust.[7] 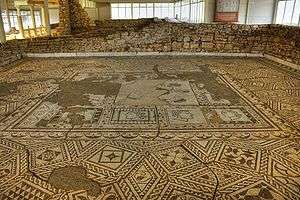 A villa might be quite palatial, such as the villas of the imperial period, built on seaside slopes overlooking the Gulf of Naples at Baiae; others were preserved at Stabiae and Herculaneum by the ashfall and mudslide from the eruption of Mount Vesuvius in 79, which also preserved the Villa of the Papyri and its libraries. Smaller in the countryside, even non-commercial villas operated as largely self-supporting units, with associated farms, olive groves, and vineyards. Roman writers refer with satisfaction to the self-sufficiency of their villas, where they drank their own wine and pressed their own oil, a commonly used literary topos. An ideal Roman citizen was the independent farmer tilling his own land, and the agricultural writers wanted to give their readers a chance to link themselves with their ancestors through this image of self-sufficient villas. The truth was not too far from the image, either, while even the profit-oriented latifundia, large slave-run villas, probably grew enough of all the basic foodstuffs to provide for their own consumption.

The late Roman Republic witnessed an explosion of villa construction in Italy, especially in the years following the dictatorship of Sulla (81 BCE). In Etruria, the villa at Settefinestre has been interpreted as being the centre of one of the latifundia that were involved in large-scale agricultural production. At Settefinestre and elsewhere, the central housing of such villas was not richly appointed. Other villas in the hinterland of Rome are interpreted in light of the agrarian treatises written by the elder Cato, Columella and Varro, all of whom sought to define the suitable lifestyle of conservative Romans, at least in idealistic terms.

Large villas dominated the rural economy of the Po Valley, Campania, and Sicily, and also operated in Gaul. Villas were centers of a variety of economic activity such as mining, pottery factories, or horse raising such as those found in northwestern Gaul.[8] Villas specializing in the seagoing export of olive oil to Roman legions in Germany became a feature of the southern Iberian province of Hispania Baetica.[9] Some luxurious villas have been excavated in North Africa in the provinces of Africa and Numidia, or at Fishbourne in Britannia.

Certain areas within easy reach of Rome offered cool lodgings in the heat of summer. Gaius Maecenas asked what kind of house could possibly be suitable at all seasons. The emperor Hadrian had a villa at Tibur (Tivoli), in an area that was popular with Romans of rank. Hadrian's Villa, dated to 123, was more like a palace, as Nero's palace, the Domus Aurea on the Palatine Hill in Rome, was disposed in groupings in a planned rustic landscape, more like a villa. Cicero had several villas. Pliny the Younger described his villas in his letters. The Romans invented the seaside villa: a vignette in a frescoed wall at the house of Lucretius Fronto in Pompeii still shows a row of seafront pleasure houses, all with porticos along the front, some rising up in porticoed tiers to an altana at the top that would catch a breeze on the most stifling evenings.[10]

Some late Roman villae had luxuries like hypocaust-heated rooms with mosaic floors; mosaics are known even from Roman Britain. As the Roman Empire collapsed, villas in Britain were abandoned. In other areas some at least survived; large working villas were donated by aristocrats and territorial magnates to individual monks, often to become the nucleus of famous monasteries. In this way, the villa system of late Antiquity was preserved into the Early Middle Ages. Benedict of Nursia established his influential monastery of Monte Cassino in the ruins of a villa at Subiaco that had belonged to Nero. Around 590, Saint Eligius was born in a highly placed Gallo-Roman family at the 'villa' of Chaptelat near Limoges, in Aquitaine. The abbey at Stavelot was founded ca 650 on the domain of a former villa near Liège and the abbey of Vézelay had a similar founding. As late as 698, Willibrord established an abbey at a Roman villa of Echternach, in Luxembourg near Trier, which Irmina of Oeren, daughter of Dagobert II, king of the Franks, presented to him.