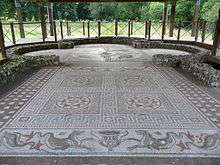 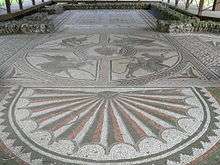 Littlecote Roman Villa is a Roman winged corridor villa and associated religious complex at Littlecote Park in the civil parish of Ramsbury in the English county of Wiltshire. It has been archaeologically excavated under the direction of Bryn Walters, and is on display to the public.

The settlement may have begun life as a small short-lived military establishment guarding a crossing of the River Kennet. This was replaced by local circular farming huts around AD 70 and a Roman-style rectangular building fifty years later. Activity involved baking ovens, malting tanks and grinding stones. After another fifty years, this was replaced by a large two-storeyed winged corridor villa with integral bath suite. This building went through a number of changes over the subsequent centuries, notably a major rebuilding around AD 270. The villa had a number of mosaics and there were detached workshops, barns and a large gatehouse.

Around AD 360, from numismatic evidence, agricultural activity seems to have ended and the complex acquired a religious use. A large barn was converted into a courtyard and a very early triconch hall was built alongside with its own bath suite. Upon its floor was laid a now famous Orpheus mosaic, first discovered in 1727 by the Steward of the Littlecote Park estate.

This mosaic is usually interpreted in very complicated pagan religious terms involving not only Orpheus, but Bacchus and Apollo, the hall being seen as a cult centre for these two gods. Other buildings may have been converted to accommodate visiting pilgrims. This development has been associated with the pagan revival under Julian the Apostate (361-363).

Many of the buildings were demolished or fell into decay around AD 400, shortly after the Theodosian legislation against paganism and before the Roman withdrawal from Britain. Two sub-Roman timber structures have also been identified on the site.