Ross Daniel Fisher (born 22 November 1980) is an English professional golfer who plays on the European Tour, where he has won five times, including the 2009 Volvo World Match Play Championship at Wentworth.

Fisher was born in Ascot, Berkshire. His home course is the famous Wentworth Golf Club, Surrey, England, location of the European Tour administrative headquarters. As a child, he attended Charters School, a state comprehensive close to Wentworth.[1] Fisher joined the European Tour in 2006. He earned his card by finishing 18th on the Challenge Tour's money list in 2005. During Fisher's first season on the European Tour he won a Jaguar for a nearest to the pin contest in the 2006 Quinn Direct British Masters.

In 2007, Fisher won the KLM Open by one stroke over Joost Luiten, and subsequently finished the year ranked 43rd on the Order of Merit. Fisher started the 2008 season with a joint-second place in the HSBC Champions tournament in Shanghai, beaten by Phil Mickelson in a three-way play-off that also featured Lee Westwood.

In July 2008, Fisher won the European Open on the Heritage Course at The London Golf Club; the first staging of the event at the venue in Kent, England. Despite never having played the course either in competition or in practice, Fisher shot a first round 63—the lowest round thus far in his professional career—which featured a wind-assisted 413-yard drive on the 9th hole, his last of the day. Having established a first round lead, he was never subsequently headed at the top of the leaderboard, going on to win the tournament by a comfortable seven shots from Sergio García. Fisher played steadily for the rest of the season and finished sixth on the Tour's Order of Merit.

Fisher's progress continued in 2009 when he reached the semi-final of the WGC-Accenture Match Play Championship in Arizona, losing to fellow Englishman Paul Casey 4 & 3. Fisher also finished second at the BMW PGA Championship at Wentworth Club, after shooting a 64 in his final round, which included 6 birdies in the first 12 holes. Fisher's 64 was just a shot outside the Wentworth course record and he finished a stroke behind the winner Paul Casey.[2]

Fisher was in contention during the final round of the 2009 U.S. Open at Bethpage Black, New York up until a three-putt bogey at the par three 17th hole. Fisher finished in 5th place, three shots behind the champion Lucas Glover.[3] The following month, at the 138th Open Championship at Turnberry, Fisher held a two-stroke lead in the early stages of the final round, before taking a quadruple-bogey eight on the par four 5th hole after driving into long rough on the right side of the hole. He eventually finished in a tie for 13th place.[4]

In 2009, Fisher had the lowest cumulative score for the four major championships for players who made the cut in all four events. Fisher's cumulative score of +2 was one stroke better than Henrik Stenson of Sweden.[5] At the end of 2009, Fisher won the first Volvo World Match Play Championship that was held away from Wentworth, defeating American Anthony Kim 4 & 3 in the final at Finca Cortesín Golf Club in Spain.[6] He finished the season in fourth place in the Race to Dubai.

Fisher had an excellent chance to shoot a round of 59 and thus make European Tour golf history at the 3 Irish Open in Killarney on 30 July 2010, when he was 10-under-par with four holes to play, only needing to birdie two of the remaining four holes, but he parred the last four holes for a round of 61. He won the tournament with an 18-under-par score of 266.[7]

Fisher qualified for the 2010 European Ryder Cup team, which regained the trophy from the United States at Celtic Manor, Wales, on 4 October.[8] He contributed two points towards the European team total and finished with a record of 2–2–0.

In March 2014, Fisher won his fifth European Tour title and first in over three years at the Tshwane Open in South Africa. Fisher won by three strokes over Michael Hoey and Danie van Tonder, having entered the day five ahead of the field.

Fisher is married to Joanne with whom he has a daughter, Eve. Joanne gave birth to the couple's second child in 2011 named Harry. 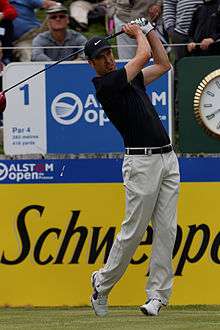 1Co-sanctioned with the Sunshine Tour