A round-robin tournament (or all-play-all tournament) is a competition "in which each contestant meets all other contestants in turn".[1][2] It contrasts with an elimination tournament.

The term round-robin is derived from the French term ruban, meaning "ribbon". Over a long period of time, the term was corrupted and idiomized to robin.[3][4]

In sports with a large number of competitive matches for season, double round-robins are common. Most association football leagues in the world are organized on a double round-robin basis, in which every team plays all others in its league once at home and once away. This system is also used during qualification for major tournaments such as the FIFA World Cup and the respective continental tournaments (e.g. UEFA European Championship, CONCACAF Gold Cup, etc.). There are also round-robin chess, draughts, go, curling and Scrabble tournaments. The World Chess Championship decided in 2005 and in 2007 on an eight-player double round-robin tournament where each player faces every other player once as white and once as black.

Group tournaments rankings usually go by number of matches won and drawn, with any of a variety of tiebreaker criteria.

Frequently, pool stages within a wider tournament are conducted on a round-robin basis. Examples with pure round-robin scheduling include the FIFA World Cup, UEFA European Football Championship and UEFA Cup (2004–2005) in football, Super Rugby (rugby union) in the Southern Hemisphere during its past incarnations as Super 12 and Super 14 (but not in its later 15- and 18-team formats), the Cricket World Cup, Indian Premier League Twenty-20 Cricket, The International (Dota 2) and many American Football college conferences, such as the Big 12 (which currently has 10 members). The group phases of the UEFA Champions League and Copa Libertadores de América are contested as a double round-robin, as are most basketball leagues outside the United States, including the regular-season and Top 16 phases of the Euroleague; the United Football League has used a double round-robin for both its 2009 and 2010 seasons.

In theory, a round-robin tournament is the fairest way to determine the champion among a known and fixed number of participants. Each participant, player or team, has equal chances against all other opposites. The element of luck is seen to be reduced as compared to a knockout system since bad performances need not cripple a competitor's chance of ultimate victory. Final records of participants are, thus, seen to be more accurate as they represent the results over a longer period against equal competition. This can also be used to determine which teams are the poorest performers and thus subject to relegation if the format is used in a multi-tiered league. This is also helpful to determine the final rank of all competitors from strongest to weakest for purposes of qualification for another stage or competition as well as for prize money. In team sport the (round-robin) major league champions is generally regarded as the "best" team in the land, rather than the (elimination) cup winners.

Moreover, in tournaments such as the FIFA or ICC world cups, a first round stage consisting of a number of mini round robins between groups of 4 teams guards against the possibility of a team travelling possibly thousands of miles only to be eliminated after just one poor performance in a straight knockout system. The top one, two, or occasionally three teams in these groups then proceed to a straight knockout stage for the remainder of the tournament.

The main disadvantage of a round robin tournament is the time needed to complete it. Unlike a knockout tournament where half of the participants are eliminated after each round, a round robin requires one round less than the number of participants if the number of participants is even, and as many rounds as participants if the number of participants is odd. For instance, a tournament of 16 teams can be completed in just 4 rounds (i.e. 15 matches) in a knockout format; a round-robin would require 15 rounds (i.e. 120 matches) to finish. Other issues stem from the difference between the theoretical fairness of the round robin format and practice in a real event. Since the victor is gradually arrived at through multiple rounds of play, teams who perform poorly can be eliminated from title contention rather early on, yet they are forced to play out their remaining games. Thus games occur late in competition between competitors with no remaining chance of success. Moreover, some later matches will pair one competitor who has something left to play for against another who does not. It may also be possible for a competitor to play the strongest opponents in a round robin in quick succession while others play them intermittently with weaker opposition. This asymmetry means that playing the same opponents is not necessarily equitable: the same opponents in a different order may play harder or easier matches while other teams are presented with more adversity during periods of the competition. There is also no scheduled showcase final match. Only by coincidence would two competitors meet in the final match of the tournament where the result of that match determined the championship. A notable instance of this occurring was the May 26th, 1989 match between Arsenal and Liverpool.

Further issues arise where a round-robin is used as a qualifying round within a larger tournament. A competitor already qualified for the next stage before its last game may either not try hard (in order to conserve resources for the next phase) or even deliberately lose (if the scheduled next-phase opponent for a lower-placed qualifier is perceived to be easier than for a higher-placed one). Four pairs in the 2012 Olympics Women's doubles badminton having qualified for the next round, were disqualified for attempting to lose in the round robin stage to avoid compatriots and better ranked opponents.[9] The round robin stage at the Olympics were a new introduction and potential problems were readily known prior to the tournament.

Swiss system tournaments attempt to combine elements of the round-robin and elimination formats, to provide a reliable champion using fewer rounds than a round-robin, while allowing draws and losses.

is the number of competitors, a pure round robin tournament requires

is even, then in each of

games can be run concurrently, provided there exist sufficient resources (e.g. courts for a tennis tournament). If

is odd, there will be

games, and one competitor having no game in that round.

The standard algorithm for round-robins is to assign each competitor a number, and pair them off in the first round …

until you end up almost back at the initial position

If there are an odd number of competitors, a dummy competitor can be added, whose scheduled opponent in a given round does not play and has a bye. The schedule can therefore be computed as though the dummy were an ordinary player, either fixed or rotating. Instead of rotating one position, any number relatively prime to

will generate a complete schedule. The upper and lower rows can indicate home/away in sports, white/black in chess, etc.; to ensure fairness, this must alternate between rounds since competitor 1 is always on the first row. If, say, competitors 3 and 8 were unable to fulfil their fixture in the third round, it would need to be rescheduled outside the other rounds, since both competitors would already be facing other opponents in those rounds. More complex scheduling constraints may require more complex algorithms.[10] This schedule is applied in chess and draughts tournaments of rapid games, where players physically move round a table. In France this is called the Carousel-Berger system (Système Rutch-Berger).[11]

The schedule can also be used for "asynchronous" round-robin tournaments where all games take place at different times (for example, because there is only one venue). The games are played from left to right in each round, and from the first round to the last. When the number of competitors is even, this schedule performs well with respect to quality and fairness measures such as the amount of rest between games. On the other hand, when the number of competitors is odd, it does not perform so well and a different schedule is superior with respect to these measures.[12]

Alternatively Berger tables,[13] named after the Austrian chess master Johann Berger, are widely used in the planning of tournaments. Berger published the pairing tables in his two Schachjahrbucher,[14][15] with due reference to its inventor Richard Schurig.[16][17]

This constitutes a schedule where player 14 has a fixed position, and all other players are rotated clockwise

positions. This schedule alternates colours and is easily generated manually. To construct the next round, the last player, number 8 in the first round, moves to the head of the table, followed by player 9 against player 7, player 10 against 6, until player 1 against player 2. Arithmetically, this equates to adding

to the previous row, with the exception of player

. When the result of the addition is greater than

This schedule can also be represented as a (n-1, n-1) table, expressing a round in which players meets each other. For example, player 7 plays against player 11 in round 4. If a player meets itself, then this shows a bye or a game against player n. All games in a round constitutes a diagonal in the table.

The above schedule can also be represented by a graph, as shown below: 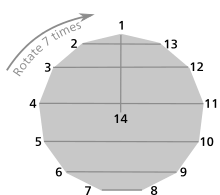 Both the graph and the schedule were reported by Édouard Lucas in [18] as a recreational mathematics puzzle. Lucas, who describes the method as simple and ingenious attributes the solution to Felix Walecki, teacher at Lycée Condorcet. Lucas also shows an alternative solution by means of a sliding puzzle.

Then a second table is constructed (with counting from the end) as shown below:

By merging above tables we arrive at:

Then the first column is updated: if

is even, player number

is alternatingly substituted for the first and second positions, whereas if

is odd a bye is used instead.

The pairing tables were published as an annex concerning the arrangements for the holding of master tournaments. Schurig did not provide a proof nor a motivation for his algorithm. For more historical details, see Ahrens.[19]