Royal Order of the Seraphim

The Royal Order of the Seraphim (Swedish: Kungliga Serafimerorden) (Seraphim being a category of Angels) is a Swedish order of chivalry created by King Frederick I on 23 February 1748, together with the Order of the Sword and the Order of the Polar Star. Since the reorganization of the orders in 1975, the Order of the Seraphim is only awarded to foreign heads of state and members of the royal family (the last non-royal Swedish holder was Sten Rudholm). The order has only one class with the dignity of Knight (Member for women and Member of the Cloth for clergymen), and is the foremost order of Sweden.

The three above-mentioned Orders together with the Order of Vasa form the Orders of His Majesty the King (Swedish Kungl. Maj:ts Orden).[2] A Swedish Knight of the Order of the Seraphim is not referred to as a Knight of the Seraphim, but rather as a Knight and Commander of the Orders of His Majesty the King (Swedish: Riddare och Kommendör av Kunglig Majestäts Orden). This form is used because the Swedish word orden is an old plural form which indicates that a knight has to be a Commander Grand Cross or 1st Class of at least one of the other Swedish Orders. Foreign Knights are for the greater part Knights of the Order of the Seraphim. A Knight of the Order may be styled "Herr" + surname, which used to be the formal style for Swedish secular Knights (untitled high-ranking noblemen) appointed by the Swedish King, a practice that ceased in the 17th Century. Until 1975 the sons of the Swedish monarch received a miniature version of the order at their baptism.[3] At present the sons and daughters of the Swedish monarch do not become knights and members of the Order until they are eighteen years of age. However Princess Estelle, the first-born of Crown Princess Victoria and Prince Daniel, received the Order of the Seraphim from her grandfather, King Carl Gustaf at her baptism on May 22, 2012. Princess Leonore, daughter of Princess Madeleine and Christopher O'Neill, also received the order at her baptism on June 8, 2014.[4]

When a knight of the Order dies, his coat of arms is hung in the former royal burial church Riddarholmskyrkan in Stockholm, and when the funeral takes place the church bells are rung constantly from 12:00 to 13:00, it is called the Serafimerringningen.

When originally instituted the knights of the Order were required to supervise the major hospitals and mental asylums in Sweden, and in particular, the Seraphim Hospital, which was a major hospital in Stockholm until it was closed in 1980. This requirement eventually died out as boards of physicians and other professionals made such supervision by the Knights of the Seraphim anachronistic during the course of the 19th century.

The first set of statutes described the Order as "revived", but this is unsubstantiated. No Swedish sources account for an ancient Order of the Seraphim.

The medieval custom of new crowned monarchs dubbing knights at their coronations[5] as a way of specially honoring particular noblemen was apparently accompanied in Sweden with the gift of a chain apparently specially designed for the occasion. These chains did not indicate the initiation into an order of chivalry as this is usually understood, since the bestowal of a chain of a particular design only occurred at a particular coronation and was not repeated at any other coronations or royal event. The description of some of these chains from the some of pre-Vasa coronations states that they consisted of alternating link of seraphim heads and patriarchal crosses, thus perhaps creating the later impression that there had been an earlier order of the Seraphim of which the 1748 order was seen as a revival. It seems reasonable to assume, at very least, that the accounts of these earlier knightly collars influenced the choice of design for the collar of the 1748 order.

This medieval custom survived into the period of the Vasa dynasty as well, for Eric XIV is known to have bestowed an Order of the Lamb of God at his coronation in 1561. Similarly, John III had bestowed the Order of the Name of Jesus in 1569. It is noteworthy that a contemporary representation of this order shows a collar of alternating red-enameled seraphim heads and gold patriarchal crosses from which hangs as pendant an oval badge enameled blue and bearing the Greek letters of the Christogram IHS (the initials of the name of Jesus in Greek) with a cross above and the three nails of the Passion below between the three crowns of the Swedish royal arms—the same as the central medallion of the latter Order of the Seraphim.[6] Charles IX bestowed the Royal Order of Jehova or Jehova Order at his coronation in 1606—perhaps as Calvinist alternative or reaction to the Catholic devotion to the Name of Jesus implied in his brother’s coronation order. Charles X Gustav’s Order of the Saviour took the form of a similar circular medallion bearing the letters IHS in diamonds surrounded by a border of diamonds in the center of a cross formed of four enameled Vasa sheaves and hanging from a pink ribbon worn around the neck, of which one example survives in the collections of the Royal Armory.[7] Queen Christina founded an Order of the Amaranth, although apparently not at her coronation, but it also did not survive her reign.

The French Order of the Holy Spirit may have inspired the idea of placing the earlier medallion of the Name of Jesus in the center of a white enameled Maltese cross with gold Seraphim heads between the arms of this cross guarding this medallion with their wings, just as the French order bore the white dove of the Holy Spirit surrounded by green flames on similar white Maltese cross. Also like the French royal orders of chivalry the breast stars of the Swedish orders similarly took the form of silver crosses.

Associated with the Order was the Seraphim Medal awarded to people who made significant contributions to Swedish charities, especially to the hospitals and mental asylums patronized by the Order. This medal consisted a gold coin-like representation of the bust of the Order's founder, King Frederick I, beneath a royal crown hanging by eight small chains from a suspension bar ornamented with a design of acanthus leaves.

Knights and Members of the Order wear the badge on a collar (chain) or on a sash from the right shoulder, and the star on the left chest: 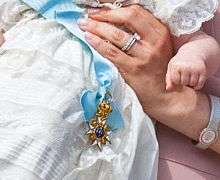 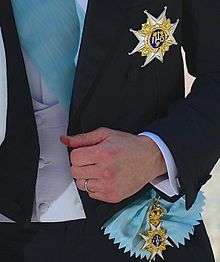 The regular-sized badge and sash on Prince Daniel

Habits of the Order

Formerly Knights of the Order also had two distinctive habits, worn on special and formal occasions such as coronations, chapters, etc. They were called the Great Habit and the Lesser Habit.

The nomination of new members took place once a year in the Seraphim Chamber of the Stockholm Palace, usually on the Monday after the First Sunday Advent, to remind the Knights that faith was due to the King of Zion.

The actual reception into the Order, however, was fixed at the 28 April, the birthday of King Frederick I, the founder of the Order. In the interval between the nomination and the reception, the newly elected member could only wear the star, but not the cross with the ribbon.

The reception of new knights into the Order took place at Stockholm in the Riddarholmen Church or in the royal chapel in the Stockholm Palace, in the presence of all the Knights and functionaries of the Order, as also of the Commanders of all the other orders.

The ceremonies were as follows:

The king was seated under a canopy to the right of the altar and the Knights assembled occupied benches to the right and the left, while the newly elected Knight was placed before the altar between two senior Knights, who acted, as it were, as sponsors. After the hymn, "Come, Holy Spirit", was chanted, the chief preacher of the Court briefly addressed those assembled on the duties of the subjects towards God, the King and the country. The Chancellor, who stood to the left of the sovereign, then explained in a few words the object of the order, the honour attached to it, and the reasons which had induced His Majesty to elect the new Knight. The two sponsors, thereupon, conduct the postulant before the King, where he kneels down, and replies affirmatively, with a simple "Yes," to all the following questions:

Did he promise before God and the King:

1. To honour, defend and preserve the laws and statutes of the Order?

2. To be ready to shed his blood for the Evangelical Lutheran religion and for the welfare of the country?

3. To assist, by his courage, to sustain the ancient glory of the Swedish Name?

4. To contribute, to the best of his power, to a life of peace and union amongst the Knights of the Order?

5. To watch over the honours and privileges now granted to him?

6. To do good to the poor and to protect widows and orphans?

On these questions being answered, the King handed the diploma to the Secretary from whom the Chancellor received the document and read it aloud to the assembly, after which the new Knight swore to defend with his life and property the Christian faith, to remain true to the King and the State, to protect the poor, widows and orphans, and to promote their welfare to the best of his power. The King then took from the Treasurer the chain of the Order, hung it round the neck of the new knight and, dubbed him with the coronation sword, saying:

"We, N., King of the Swedes, the Goths and the Wends, receive thee as are brave and honourable Swedish and Gothic Knight of our Order of the Seraphim. Be worthy of it," and embracing him amid the sound of drums and trumpets, he concluded with the words: "May the Lord protect thee!" The new Knight, then thanked His Majesty, kissed his hand, and embraced all his new colleagues, whereupon each of them repeated the words: "May the Lord protect thee!" With this the ceremony concluded. 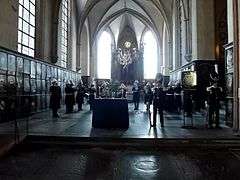