Orders, decorations, and medals of Sweden 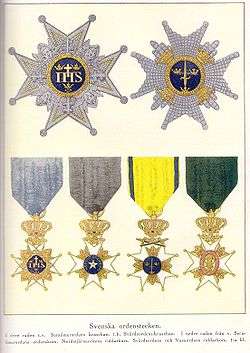 Orders of Sweden constituting the Royal Order of Knights

The Orders, decorations, and medals of Sweden have a historical basis, reaching back to the 1606 founding of the extinct Jehova Order. The Royal Order of Knights of Sweden were only truly codified in the 18th century, with their formal foundation in 1748 by Frederick I of Sweden. Significant reforms in 1974 changed the conditions and criteria under which many orders and decorations could be awarded.[1]

Orders of knighthood under royal patronage

Decorations and medals of the Royal Orders

Royal Medals presented by the King

Royal Medals presented by the Government