The 9K34 Strela-3 (Russian: 9К34 «Стрела-3»; English: arrow) is a man-portable air defence missile system (MANPADS) developed in the Soviet Union as a response to the poor performance of the earlier 9K32 Strela 2 (SA-7 Grail) system. "9K34" is its GRAU designation, while its NATO reporting name is SA-14 Gremlin. The missile was largely based on the earlier Strela 2, and thus development proceeded rapidly. The new weapon was accepted to service in the Soviet Army in January 1974.

The most significant change over the Strela 2 was the introduction of an all-new infra-red homing seeker head. The new seeker worked on FM modulation (con-scan) principle, which is less vulnerable to jamming and decoy flares than the earlier AM (spin-scan) seekers, which were easily fooled by flares and even the most primitive infrared jammers. The new seeker also introduced detector element cooling in the form of a pressurized nitrogen bottle attached to the launcher.

The effect of cooling was to expand the seeker's lead sulphide detector element's sensitivity range to longer wavelengths (slightly over 4 µm as opposed to 2.8 µm of uncooled PbS elements). In practice this made possible the tracking of cooler targets over longer ranges, and enabled forward-hemisphere engagement of jets under favourable circumstances.The seeker also had better tracking rate, enabling the missile to track maneuvering of fast and approaching targets.

A negative side effect from the aforementioned improvements was increased missile weight, which caused a slight decrease in the kinematic performance of the original Strela-2 (SA-7). Against relatively slow, low-altitude battlefield air threats the overall effectiveness was much improved.

Strela-3 missiles have been exported to over 30 countries.

The original Strela-3 missile was the 9M36. The follow-on to the Strela-3 was Igla.

The naval version of this missile has the NATO reporting name of SA-N-8.

An Airbus A300 cargo plane was hit by a Strela-3 missile after takeoff from Baghdad International Airport, but managed to land safely despite losing hydraulic power.

On 6 May 2006, a British Westland Lynx AH.7 of the Royal Navy from 847 Squadron was shot down with a Strela-3 over Basra, killing five crewmen and crashing into a house.[1]

A Zimbabwe Air Force Il-76 was shot down by Congolese rebels using an SA-14 on October 11, 1998 during the Second Congo War, resulting in the death of 40 troops and crew.[4]

SA-14s used by the Northern Alliance are credited with having shot down 8 Taliban MiG-21 and Su-22 fighters during the Taliban's 2000 offensive against Taloqan.[5] 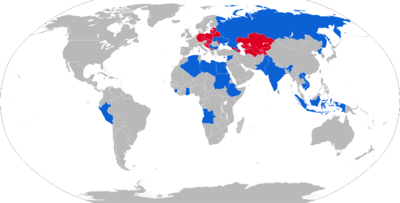