Sportklub Rapid Wien (German pronunciation: [raˈpiːd viːn]), often called Rapid Vienna in English, is an Austrian football club playing in the country's capital city of Vienna. Rapid is the most successful Austrian club in terms of league titles; it has won 32 Austrian league titles, and a German championship in 1941 during Nazi rule. Rapid twice reached the final of the European Cup Winners' Cup in 1985 and 1996, losing on both occasions.

The club is often known as Die Grün-Weißen (The Green-whites) for its team colours or as Hütteldorfer, in reference to the location of the Gerhard Hanappi Stadium, which is in Hütteldorf, part of the city's 14th district, Penzing.

The club was founded in 1898 as Erster Wiener Arbeiter-Fußball-Club (First Viennese Workers' Football Club). The team's original colours were red and blue, which are still often used in away matches. On 8 January 1899 the club was renamed, taking on its present name of Sportklub Rapid Wien, following the example of Rapide Berlin. In 1904, the team colours were changed to green and white. The club won Austria's first ever national championship in 1911–12 by a single point,[1] and retained the title the following season.[2]

Rapid became a dominant force during the years between the world wars, an era in which Austria was one of the leading football nations on the continent. It won its first hat-trick of titles from 1919 to 1921.[3] After the annexation of Austria to Germany in 1938, Rapid joined the German football system, playing in the regional first division Gauliga Ostmark along with clubs such as Wacker Wien and Admira Vienna. Rapid would be the most successful of these clubs. They won the Tschammerpokal, predecessor of today's German Cup, in 1938 with a 3–1 victory over FSV Frankfurt, and followed that with a German Championship in 1941 by defeating Schalke 04, the most dominant German club of the era. The team was able to overcome a 3–0 Schalke lead to win the match 4–3.

As the winners of the 1954–55 season, Rapid were Austria's entrant for the inaugural European Cup in the following season. They were drawn in the first round against PSV Eindhoven of the Netherlands, and opened with a 6–1 home victory with Alfred Körner scoring a hat-trick. Despite losing the away leg 1–0. the club still advanced to a quarter-final, where they started with a 1–1 home draw against Italy's AC Milan before being defeated 7–2 in the away match at the San Siro and lose 8–3 on aggregate.[4]

Rapid's best performance in the European Cup came in the 1960–61 season when they reached the semi-final before being eliminated by eventual winners S.L. Benfica of Portugal 4–1 on aggregate. Previously, in the quarter-final, the club required a replay to eliminate East German club Aue from the tournament after a 3–3 aggregate draw. The modern away goals rule would have seen Aue advance without needing the replay, held at the St Jakob Park in neutral Basel, Switzerland.[5]

The club was involved in a controversial episode in 1984 when they eliminated Scottish club Celtic from the European Cup Winners Cup last 16. Celtic were leading 4–3 on aggregate with 14 minutes left in the match, when Rapid conceded a penalty. As the Rapid players protested to the match officials, their defender Rudolf Weinhofer then fell to the ground, and claimed to have been hit by a bottle thrown from the stands. Television images clearly showed that a bottle was thrown onto the pitch and did not hit the player. The match finished 4–3, but Rapid appealed to UEFA for a replay, and both teams were fined. The replay appeal was turned down initially, but Rapid appealed for a second time. On this occasion, Rapid's fine was doubled but UEFA also stipulated that the game be replayed 100 miles away from Celtic's ground. The game was held on 12 December 1984 at Old Trafford, Manchester, England and Rapid won 1–0 through a Peter Pacult strike.

Rapid reached its first European final in 1985, losing 3–1 in the Cup Winners' Cup Final to Everton of England in Rotterdam. Eleven years later, in the same tournament's final in Brussels, Rapid lost 1–0 to Paris SG of France.[6]

Rapid reached the Group Stage of the UEFA Champions League for the most recent time in 2005–06 after beating Dudelange of Luxembourg 9–3 on aggregate and then defeating Lokomotiv Moscow 2–1 on aggregate in a play-off after a 1–0 victory in Russia. They eventually finished last in their group after losing all of their matches with Bayern Munich, Juventus and Club Brugge.[7]

Almost since the club's beginnings, Rapid fans have announced the last fifteen minutes of the game by way of the traditional "Rapidviertelstunde" – rhythmic clapping at home or away no matter what the score. The first mention of the practise goes back to 1913, and on 21 April 1918 a newspaper wrote about the fans clapping at the beginning of the "Rapidviertelstunde". Over the decades, there were many instances where the team managed to turn around a losing position by not giving up and, with their fans' support, fighting their way to a win just before the final whistle.

Rapid played at the Gerhard Hanappi Stadium, which was opened on 10 May 1977 with a Wien derby match against Austria Vienna until the 2013/2014 season. The stadium bore the name of its architect Gerhard Hanappi, who also played for Rapid from 1950 to 1965. Prior to 1980, when it was renamed in his honour, it was known as the Weststadion (Western Stadium), due to its position in the city.

In June 2014, it was announced that a new stadium, named Allianz Stadion, will be built in place of the Gerhard Hanappi Stadium.[8] During its construction, Rapid will host its home games in the Ernst Happel Stadion.

A 2010 Wien derby match between Rapid Vienna and Austria Vienna.

Rapid Vienna contest the Wien derby with their local rival Austria Vienna. The two clubs are the most supported and successful in the entire country. Both teams originate from Hietzing, the 13th district in the west of the city, but have since moved into different districts. While Austria Vienna is seen as a middle-class club, Rapid traditionally hold the support of the capital's working class. The two clubs first met in a league championship match on 8 September 1911, a 4–1 victory for Rapid.[9] The fixture is the most-played derby in European football after the Old Firm match in Glasgow, Scotland. 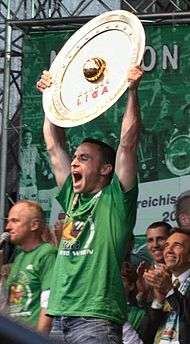 Rapid is Austria's record titleholder, winning these a total of 32 times to date. The club won a German Championship and German Cup while part of that country's football competition from 1938–45, following the annexation of Austria by Germany on 12 March 1938. 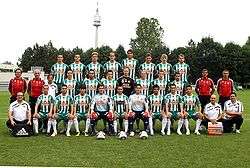