pronunciation ; born 4 June 1946, is an Indian film playback singer, actor, music director, voice actor and film producer. He is mostly referred to as S. P. B. or Balu. He has won the Guinness World Record for recording the highest number of songs.[1][5][6] He has garnered six National Film Awards for Best Male Playback Singer, and twenty five Nandi Awards for his works towards Telugu cinema.[7][8][9][10]

He has recorded over 40,000 songs in various Indian languages.[11] He has won National Film Awards across four languages, as well as a bollywood Filmfare Award, five Filmfare Awards South, and numerous state awards from Tamil Nadu and Karnataka. He is a recipient of civilian awards such as Padmashri (2001) and Padma Bhushan (2011) from the government of India.[12] In 2016, he was honored with the inaugural Centenary Award for Indian Film Personality of the year at the 47th International Film Festival of India.[13][14]

Balasubrahmanyam was born to S. P. Sambamurthy in Nellore District, Andhra Pradesh, India.[2][3][4] Balasubrahmanyam's father was a Harikatha artiste who had also acted in plays.[15] He has two brothers and five sisters, including singer S.P. Sailaja.[16][17]

Balasubrahmanyam developed an interest towards music at an early age, studied notations and learned to play instruments such as the harmonium and flute on his own while listening to his father. He enrolled at JNTU College of Engineering Anantapur with the intention of becoming an engineer. He discontinued his studies early due to typhoid and joined as an Associate Member of the Institution of Engineers, Chennai.[11][18]

He continued to pursue music during his engineering studies and won awards at singing competitions. In 1964, he won the first prize in a music competition for amateur singers organised by the Madras-based Telugu Cultural Organisation. He was the leader of a light music troupe composed of Anirutta (on the harmonium), Ilaiyaraaja (on guitar and later on harmonium), Baskar (on percussion), and Gangai Amaran (on guitar).[19] He was selected as the best singer in a singing competition which was judged by S. P. Kodandapani and Ghantasala.[20][21] Often visiting music composers seeking opportunities, his first audition song was "Nilave Ennidam Nerungadhe". It was rendered by veteran playback singer P. B. Srinivas, who used to write and give him multi-lingual verses in Telugu, Tamil, Hindi, Kannada, Malayalam, Sanskrit, English and Urdu.[22]

Balasubramanyam is married to Savitri and has two children, a daughter Pallavi,[23][24] and a son S. P. B. Charan, also a playback singer and film producer.[25][26]

Balasubrahmanyam made his debut as a playback singer on 15 December 1966 with Sri Sri Sri Maryada Ramanna, a Telugu film scored by his mentor, S. P. Kodandapani.[27][28] The first Non-Telugu song that he recorded just eight days after his debut Telugu song was in Kannada in 1966 for the film 'Nakkare Ade Swarga' starring Kannada comedy stalwart T. R. Narasimharaju.[29][30] He recorded his first Tamil song "Eyarkai ennum illaya kanni" in the 1969 film Shanthi Nilaiyam starring Gemini Ganesan. He sang "Aayiram Nilavae Vaa" for M.G.R in the Tamil film Aadimai Penn.[31] He was then introduced to Malayalam film industry by G. Devarajan in the film Kadalppalam.[32]

He has the rare distinction of rendering most number of songs on a single day by any singer. He has recorded 21 songs in Kannada for the composer Upendra Kumar in Bangalore from 9:00 am to 9:00 pm on February 8, 1981 and 19 songs in Tamil, 16 songs in Hindi in a day which is a notable achievement and a record.[6] He established a prolific career. "There were days when I used to record 15–20 songs, but only for Anand-Milind. And I would take the last flight back to Chennai."[33][34] In the 1970s, he also worked with M. S. Viswanathan in Tamil movies for actors such as M. G. Ramachandran, Sivaji Ganesan and Gemini Ganesan. He recorded duets with P. Susheela, S. Janaki, Vani Jayaram and L. R. Eswari. Balasubrahmanyam's association with Ilaiyaraaja began even before Ilayaraja came to the cine field. In those days SPB used to sing in Towns, villages all over south India and Ilaiyaraaja an unknown harmonium and guitar player at that time accompanied SPB by playing in his concerts. 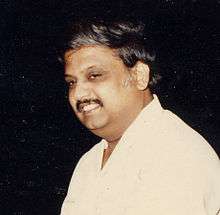 Balasubrahmanyam came to international prominence with 1980's Shankarabharanam. The film is considered to be one of the best films ever to emerge from Telugu film industry.[35][36] Directed by K. Vishwanath, the film's soundtrack was composed by KV Mahadevan and led to an increase in usage of Carnatic music in Telugu cinema. Not a classically trained singer, he used a 'film music' aesthetic in recording the songs.[37] Balasubrahmanyam received his first National Film Award for Best Male Playback Singer for his work. His first work in Hindi films was the following year, in Ek Duje Ke Liye (1981), for which he received another National Film Award for Best Male Playback Singer.[9]

Balasubrahmanyam began to record more songs in Tamil especially for Ilaiyaraaja with Janaki, the trio considered to be highly successful in the Tamil film industry from the late 1970s and throughout the 1980s in Telugu films based on classical music like Saagara Sangamam (1983), for which both Ilaiayaraaja and S.P.B won National Film Awards, Swathi Muthyam (1986) and Rudraveena (1988) which again won National Awards for Ilaiyaraaja and Balasubrahmanyam.[38]

In 1989, Balasubrahmanyam was the playback singer for Bollywood actor Salman Khan in the blockbuster Maine Pyar Kiya.[39] The soundtrack for the film was very successful and he won a Filmfare Award for Best Male Playback Singer for the song Dil Deewana. For much of the next decade, Balasubrahmanyam continued as the 'romantic singing voice' on the soundtracks of Khan's films.[40] Notable among these was Hum Aapke Hain Koun..! which became the highest-grossing Bollywood film of all time[41] Balasubrahmanyam's duet with Lata Mangeshkar, "Didi Tera Devar Deewana", was very popular. This solidified Balasubrahmanyam as one of the biggest playback singers in India.[42]

In the 1990s he worked with composers like Vidyasagar, M. M. Keeravani, S. A. Rajkumar and Deva among others, but his association with A.R.Rahman turned out be a major success.

Balasubramanyam's association with Hamsalekha began after the latter's successful venture Premaloka in Kannada. Balasubramanyam sung the most number of songs for Hamsalekha in Kannada. He received his 4th National Film Award for Best Male Playback Singer for the song "Umandu Ghumandu" from the Kannada film Ganayogi Panchakshari Gavayi (1995), which was a Hindustani classical music based composition by Hamsalekha.[38]

Balasubrahmanyam recorded three songs for A. R. Rahman in his debut film Roja. He had a long time association with Rahman right from Roja, the latter's debut film. Other popular songs include "July Maadham" from Pudhiya Mugam, which also marked the debut of singer Anupama, "Mannoothu Manthayilae" from Kizhakku Cheemayile which was a folk number and he almost sang all songs in the musical love story Duet and "Thanga Thaamarai" from Minsara Kanavu which fetched his sixth and latest of his National Film Award for Best Male Playback Singer till date.

In 2013, Balasubrahmanyam recorded the popular title song for Chennai Express – "Nikal Na Jaaye Chennai Express", singing for the lead actor Shahrukh Khan, under the music direction of Vishal-Shekhar. He returned to Bollywood music after being away from it for 15 years.[43]

Balasubrahmanyam accidentally became a dubbing artist with Kamal Hassan's film Manmadha Leela, the dubbed Telugu version of Manmadha Leelai.[44] He has also provided voice-overs for various artists, including Kamal Haasan, Rajinikanth, Salman Khan, K. Bhagyaraj, Mohan, Anil Kapoor, Girish Karnad, Gemini Ganesan, Arjun Sarja, Nagesh, Karthik and Raghuvaran in various languages. He was assigned as the default dubbing artist for Kamal Hassan in Telugu dubbed versions of Tamil films. For the Telugu version of Dasavathaaram he gave voice to seven characters (including the female character) out of ten characters played by Kamal Hassan.[45] He was awarded Nandi Award for Best Male Dubbing Artist for the films Annamayya and Sri Sai Mahima.[46] He dubbed for Nandamuri Balakrishna for the Tamil version of the movie Sri Rama Rajyam in 2012.[47]