Sakleshpur or Sakleshapura (Kannada: ಸಕಲೇಶಪುರ) is a hill station town and headquarters of Sakleshapura Taluk in Hassan district in the Indian state of Karnataka. 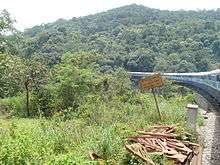 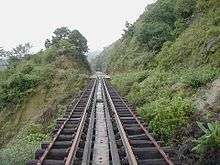 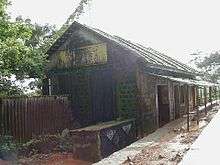 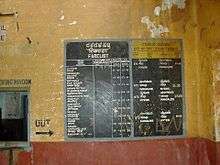 Inside an abandoned railway station

The town lies in the Malnad region on the magnificent hills of the biodiversity hotspot, the Western Ghats. It has a temperate climate surrounded with lofty green hills full of coffee, cardamom, pepper and areca plantations. These crops which contribute mainly to the economy of the taluk are grown in the surrounding villages and the entire taluk are brought to Sakleshapura city for sale. The town lies on the National Highway 48 (NH-48) which connects the port city of Mangalore, with the capital city Bangalore of Karnataka state. The nearest airport is Mangalore International Airport.

The Western Ghats mountains extend along the western edge of the taluk, separating Sakaleshapura from Dakshina Kannada district. The rest of the district lies on the Deccan Plateau. The Hemavathi River, a tributary of the Kaveri, drains the eastern portion of the district, originating in Chikkamagalur district and flowing through Sakaleshapura town.

Two rivers originate in Sakaleshapura taluk and drain westward through the Ghats. The Kempuhole River originates near Manjarabad Fort and flows westward to join the Netravati River, which empties into the Arabian Sea at Mangalore. The Kumaradhara River, another tributary of the Netravati, drains the southwestern portion of the taluk. These rivers form passes through the Ghats. The Bangalore-Mangalore Highway follows the Kempuhole River, as does the rail line linking Sakaleshapura to Dakshina Kannada. Bisile Ghat Road follows the Kumaradhara, linking the southwestern portion of the taluk to Kulkunda and Subrahmanya in Dakshina Kannada.

Sakaleshapura receives very heavy rainfall from the southwest monsoon. It is one of the places receiving the most rainfall in Karnataka. The places are like Agani (near Hanbal-here the average rainfall is believed to be more than that of Agumbe, which receives the highest rainfall in South India. The analysis of last 16 (1996–2011) years of data reveals that the highest (Av. 2050.3 mm / 80.72 inches) rainfall has occurred in Sakaleshapura. In 1997 it had received 2916 mm / 114.80 inches of rainfall. In 2010 it had received 2920 mm / 114.96 inches.

The name Shakala is a Sanskrit word which means "Bhinnavada" or "Birukada". In the past a Shivalinga found in this town which was broken. The linga was called as Shakaleshwara which since then became Sakaleshwara in the tongue of the local people. A temple was also built at the entrance of the town. Later, the town was also called as Sakaleshapura. Sakaleshwara swami's ratha yatra is held on Purnima in February of every year. In front of the Shakaleshwara temple, a newly constructed Shiva temple called as "Holemalleshvara" is situated right next to river Hemavathi. During the rainy season, the temple is filled up with water and is as famous as the Shakaleshwara temple.

Another theory is that the name Sakaleshapura evolved from sakala-aishwarya-pura, which in turn got condensed from sakala aishwaryagalinda kudida pura – literally meaning that the place is blessed with all kinds of wealth: Water (River Hemavati); Coffee; Spices – including Cardamom & Pepper; excellent Climate too – being a Hill Station that earned the sobriquet “poor man’s Ooty” during the British Raj; Education; Road links, and lately also a Rail head, etc. This, quoting local coffee planter of repute – the erudite erstwhile educationist & historian, head of department of Oriental Languages and Professor of Kannada at Mangalore’s St Aloysius College: Ligoury Bernard Pereira – who eloquently described the place with all its attributes of wealth – at the State Scouts & Guides Jamboree held in Sakaleshapur in 1978.

The primary mode of employment in the Sakaleshapura region is agriculture. Crops grown include coffee, rice, pepper, cardamom, ginger and tea with coffee being dominant. Sakaleshapura coffee is shade grown on the slopes of the Western Ghats as the elevation is not high enough to enable the intensive cultivation practices followed in the Brazilian and Colombian highlands. But shade cultivation is acclaimed by environmentalists rather than sunlight cultivation followed in Ethiopia and other African Coffee growing nations, as western ghats runs through Sakaleshapura. Large timber yielding trees such as Rose wood and Jack trees provide shade for these coffee bushes.

Coffee growers are typically small farm owners with plantation sizes ranging from 10 acres (40,000 m2) to 10,000 acres (40 km2) as in Kaadumane Estate. Of late, several corporations such as Tata, IBC Group and the TI group have adopted large scale cultivation. The larger plantations process and market the coffee themselves in the domestic and international markets.

Sakaleshapura Taluk accounts for around a third of Indian cardamom production.

Sakaleshapura is located in the Western Ghats, a mountain range that stretches from Kerala to Gujarat. The southern range, which includes Bisle Reserve Forest and the region around Sakaleshpura is listed as one of the 18 most diverse spots in the world in terms of flora and fauna. The sub-tropical climate and heavy rains during the wet season create an environment where several unique plant and animal species flourish. With people of Sakaleshapura being very hospitable, the tourism industry is increasingly embracing the Bed & Breakfast model and now offers several choices for a weekend getaway.

The Manjarabad fort is located just outside Sakaleshapura on National Highway 48. The fort is reputed to have been constructed by Tippu Sultan, the erstwhile ruler of Mysuru as a strategic defensive location as it commands the approach to the plateau beyond Sakaleshapura from the coast. It is also believed that he had constructed a tunnel from this fort to another fort in Srirangapattana near Mysuru. Jenukal gudda is the third highest peak in Karnataka, located at Maragunda 24km outside Sakaleshapura.

Raxidi Estate is around 1000 acre land of coffee estate in the city of Sakaleshapura. It has a temperate climate surrounded with lofty green hills full of coffee, cardamom & pepper. Large timber yielding trees such as Rose wood and Jack trees provide shade for these coffee bushes. The sub-tropical climate and heavy rains during the wet season create an environment where several unique plant and animal species flourish. Raxidi Estate is often swathed in mist as the cool temperate surroundings are met with warm air. Raxidi Estate is so beautiful spot, it is a place of mind relief, it is beauty of nature. 'Mookana mane abhi falls' is located in Athihalli village, which is 50 km from Sakaleshapura town, which seems to be most beautiful waterfall in Sakaleshapura taluku.

Trekking along this route no longer possible, as train services have resumed since 2007

The Green Route "Trek on the Railway Track", is a stretch of track from Sakleshapur to the Subrahmanya railroad station, which was suspended in 1996 to convert the gauge from meter to broad gauge. In the 2007 the train service was commissioned and nowadays many people use the train to reach Donigal.

This track, that traverses some distance of the Western Ghats, had been abandoned, but now the track has been converted to broad-gauge. It forms a part of 56.80 km stretch from Sakaleshapura to Kukke Subrahmanya, dotted by 58 tunnels, 109 bridges and about 25 waterfalls. Since 2005 goods trains are carrying freight to/from the Mangaluru Port. It is recommended to trek after monsoon season i.e. during October. The passenger trains have started plying on the route since 2008. Currently, there are two passenger trains running on this route, one from Mysore via Hassan(daily), and another from Bengaluru, via Tumkur and Arasikere(alternate days).

The town itself makes for a pleasant halfway stop for travelers along National Highway 48—being the apex town in a long trail of road beginning in Bantwal near Mangalore, winding its way up the Western Ghats. As such, the town is often swathed in mist as the cool temperate surroundings are met with warm air from the coastal lowlands. The exit highway is equally picturesque with tall hedges lining both sides of the road, enclosing coffee groves within.

Jenukal Gudda is less famous than other trekking spots.

The Manjarabad Fort was constructed by Pallada dore its a jail after Tippu Sultan accrued and invigorated this. It is located on the outskirts of Saklaeshapura on NH48. It has a star-shaped fort, with a hillock in the centre and eight corners. The climb to the hillock in the centre is difficult, but offers superb views. There is a hollow entrance in the centre, which is said to the entrance of a tunnel leading to Srirangapattana. There is a mural with the fort's map at the entrance which is in excellent condition. The fort is maintained by the Department of Archeology.[3]