Madikeri is a hill station town in Karnataka state, India. Also known as Mercara, it is the headquarters of the district of Kodagu (also called Coorg). It is a popular tourist destination.

Madikeri was formerly known as Muddu raja keri.[1] Muddurajakeri which means Mudduraja's town, was named after the prominent Haleri king, Mudduraja who ruled Kodagu from 1633 to 1687.

The form of the name often used in English, Mercara, is derived from Madikeri by a standard transformation of the retroflex 'd' to an 'r' consonant. 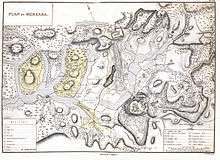 The history of Madikeri is related to the history of Kodagu. From the 2nd to the 6th century AD, the northern part of Kodagu was ruled by Kadambas. The southern part of Kodagu was ruled by Gangas from the 4th to the 11th century. After defeating the Gangas in the 11th century, Cholas became the rulers of Kodagu. In the 12th century, the Cholas lost Kodagu to the Hoysalas. Kodagu fell to the Vijayanagar kings in the 14th century. After their fall, the local chieftains like Karnambahu (Palegars) started ruling their areas directly. They were defeated by Haleri Dynasty founder Veeraraju, (Nephew of Ikkeri Sadashiva Nayaka who were descendants of Talakadu Ganga Dynasty), and his father in-law Bomma Gowda, the Seeme Gowda of Haleri kings. In the year 1700AD Ikkeri Somashekara Nayaka gifted Puttur and Amara Sullia Magnes of Tulunadu to Haleri Kings. Descendants of Veeraraju who are known as "Haleri Dynasty" ruled Kodagu from 1600-1834 AD. Haleri king Mudduraja built the Fort in Madikeri and made it [2]as their capital. Mudduraja, the third Haleri king started leveling the land around Madikeri and built a fort in the year 1681. Madikeri Fortwhich was original built of mud and was replaced by Tipu Sultan. Kodagu became the part of British India after 1834 AD.[3]

The main language of Madikeri is Kodava Takk, Kannada, Arebhashe (A form of kannada) spoken by Gowdas those who migrated from South Canara or Dakshina Kannada and settled in Kodagu, features prominently here.Gowdas were originally from Igoor Maha Samsthana (Present Districts of Shimoga, Chikkamagaluru, Hassan and Part of Kodagu whose Roots are traced to Ganga Dynasty of Talakadu.

The mean daily minimum temperature is lowest in January at about 11 °C.Maximum temperature in summer is around 24 °C to 27 °C.[7] With the onset of the south-west monsoon, the temperature decreases in June and the weather becomes chilly.The lowest temperature recorded is 4.5 °C.

Madikeri lies on the Karnataka State Highway 88 that runs from Mangaluru to Mysuru. It is 120 km from Mysore and 136 km from Mangaluru. From Bengaluru, the state capital of Karnataka, one can take the State Highway 17 (Bangalore - Mysore Highway) and take a deviation just after the town of Srirangapatna to join State Highway 88 towards Madikeri. It can be approached from Mangaluru via Puttur, Sullia passing through Sampaje Ghat .From Bangalore, Madikeri is at a distance of 252 km. Nearby towns are Hassan (115 km), Sullia at a distance of 52 km in Karnataka state and Kannur, Thalassery, Kanhangad and Uppala in Kerala state (each around 114 km away).

Madikeri does not have a railway station. The nearest railheads are Hassan, Kasaragod, Kanhangad, Kannur and Thalassery (each of which are almost equidistant at 115 km away). Mysore at 120 km and Mangalore at 140 km away are good alternatives to reach Madikeri from within Karnataka. 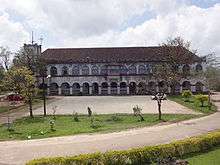