Military tactics are the science and art of organizing a military force, and the techniques for combining and using weapons and military units to engage and defeat an enemy in battle.[1] Changes in philosophy and technology have been reflected in changes to military tactics. In contemporary military science, tactics are the lowest of three planning levels: (i) strategic, (ii) operational, and (iii) tactical. The highest level of planning is strategy: how force is translated into political objectives by bridging the means and ends of war. The intermediate level, operational, the conversion of strategy into tactics, deals with formations of units. In the vernacular, tactical decisions are those made to achieve the greatest immediate value; strategic decisions are those made to achieve the greatest overall value, irrespective of the immediate results of a tactical decision. 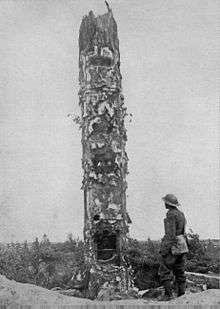 German World War I observation post disguised as a tree.

Military tactics answer the questions of how best to deploy and employ forces on a small scale.[2] Some practices have not changed since the dawn of warfare: assault, ambushes, skirmishing, turning flanks, reconnaissance, creating and using obstacles and defences, etc. Using ground to best advantage has not changed much either. Heights, rivers, swamps, passes, choke points, and natural cover, can all be used in multiple ways. Before the nineteenth century, many military tactics were confined to battlefield concerns: how to maneuver units during combat in open terrain. Nowadays, specialized tactics exist for many situations, for example for securing a room in a building.

Technological changes can render existing tactics obsolete, and sociological changes can shift the goals and methods of warfare, requiring new tactics. Tactics define how soldiers are armed and trained. Thus technology and society influence the development of types of soldiers or warriors through history: Greek Hoplite, Roman Legionary, Medieval Knight, Turk-Mongol Horse Archer, Chinese Crossbowman, British Redcoat, or an Air Cavalry trooper. Each – constrained by his weaponry, logistics and social conditioning – would use a battlefield differently, but would usually seek the same outcomes from their use of tactics. The First World War forced great changes in tactics as advances in technology rendered prior tactics useless.[3]