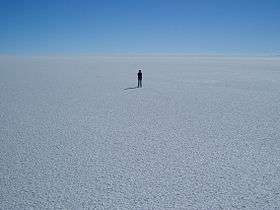 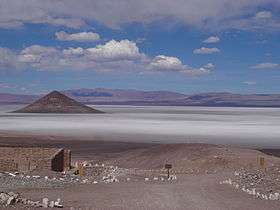 Natural salt pans or salt flats are flat expanses of ground covered with salt and other minerals, usually shining white under the Sun. They are found in deserts, and are natural formations (unlike salt evaporation ponds, which are artificial).

A salt pan forms by evaporation of a water pool such as a lake or pond. This happens in climates where the rate of water evaporation exceeds the rate of precipitation, that is, in a desert. If the water cannot drain into the ground, it remains on the surface until it evaporates, leaving behind minerals precipitated from the salt ions dissolved in the water. Over thousands of years, the minerals (usually salts) accumulate on the surface. These minerals reflect the Sun's rays and often appear as white areas.

Salt pans can be dangerous. The crust of salt can conceal a quagmire of mud that can engulf a truck. The Qattara Depression in the eastern Sahara desert contains many such traps which served as strategic barriers during World War II.[1] 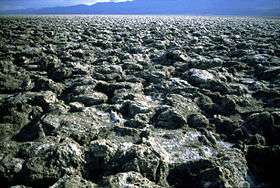 The Bonneville Salt Flats in Utah, where many land speed records have been set, is a well-known salt pan in the arid regions of the western United States.

Devil's Golf Course, in Death Valley, is the largest salt pan in the United States.

The Etosha pan, in the Etosha National Park in Namibia, is another prominent example of a salt pan.

The Salar de Uyuni in Bolivia is the largest salt pan in the world. It contains 50%-70% of the world's lithium reserves.