San Miguel de Tucumán (usually called simply Tucumán) is the capital of the Tucumán Province, located in northern Argentina 1,311 kilometres (815 mi) from Buenos Aires. It is the fifth-largest city of Argentina after Buenos Aires, Córdoba, Rosario and Mendoza and the most important of the northern region. The Spanish Conquistador Diego de Villarroel founded the city in 1565 in the course of an expedition from present-day Peru. Tucumán moved to its present site in 1685.

The city is bordered on the north by Las Talitas (Tafí Viejo), on the east by Banda del Río Salí and Alderetes (Cruz Alta), on the west by the city of Yerba Buena, and on the south by Lules.

The city is located on the slopes of the Aconquija mountains, the easternmost mountain range before the large Chaco-Pampean flats. It is the commercial center of an irrigated area that produces large quantities of sugarcane, rice, tobacco, and fruit, giving the province its nickname, the Garden of the Republic. The National University of Tucumán (1914) and the Saint Thomas Aquinas University of the North (1965) are in the city.

On July 9, 1816, a congress gathered in Tucumán declared independence from Spain, which did not officially recognize it until 1862. The meeting place of the congress, the House of Tucumán, has been reconstructed as a national monument. After the national government broke down in 1820, the town was capital of the short-lived Republic of Tucumán. 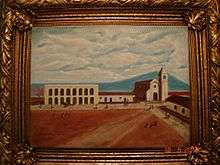 "Tucumán 1812", by Gerardo Flores Ivaldi. The Cabildo and San Francisco church are displayed on the painting. 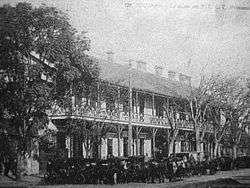 Demolition of the former Cabildo, 1908.

The first foundation of "San Miguel de Tucumán y Nueva Tierra de Promisión" was on May 31, 1565 by Diego de Villarroel in the Campos de Ibatín, distant 60 km to the south west from the current city is located nowadays. The city was moved to "La Toma" (where the old town or casco histórico is placed today) in 1685, due to the low quality of Ibatín water.

On September 24, 1812, the Battle of Tucumán took place near the city, when the Spanish army coming from the Alto Perú were defeated by the army led by Manuel Belgrano. Belgrano had been committed to step back to Córdoba by the government of Buenos Aires, but the Tucumán inhabitants requested him to resist another Spanish invasion.

With his troops almost unarmed and tired but reinforced with local gauchos (self named Los decididos de Tucumán), Belgrano attacked the Spanish army by their backs, defeating them and ensuring the Independence of Argentina so after the battle of Tucumán, the same army led by Belgrano would achieve another victory in Salta.

After those battles, Belgrano established in a circle-shaped fortress known as "La Ciudadela", located 1-km from the current Plaza de la Independencia (former Plaza Mayor). Because of being a patriot barracks and located on an intermediate point between the Río de la Plata and the Alto Perú and Santa Cruz de la Sierra, San Miguel de Tucumán was designated as city venue for the Congress of the Independence. On July 9, 1816, the Independence of Argentina was declared, not only of Spain but any other foreign domination. The act of the Independence was signed at the Casa de Tucumán, also named "Casa Histórica" or "Casa de la Independencia".

By 1850 the city has been increased its population considerably, overpassing the estimated registers. Because of that, in 1870 it was proposed the city was expanded, setting new limits. During those years, the first railway line reached the city, built by British-owned Córdoba Central Railway. The immigrants arrived to the region (most of them were Spanish, Arabian, Jews and Italians) influenced the architectural style that adapted to those new cultures, leaving the original colonial style behind. Therefore, new buildings in the city were made in Neoclassical, eclectic and pinturesque styles.

During the first years of 20th Century the city added 400 ha for recreational uses, therefore the first great park (similar to the existing in Paris and London) was built. Until 1930 the city doubled its population. 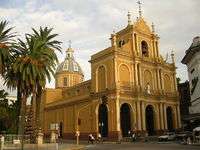 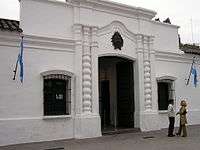 Casa de Tucumán, where the Argentine Independence was declared. 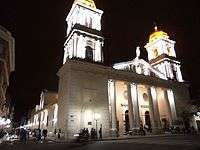 The House of Government of Tucumán was built in Art Nouveau style at the end of 19th. Century. The White Room is commonly used to receive notable people that visit the city.[6]

The Casa de Tucumán (or "Casa de la Independencia") is the most significative building of the city so the Independence of Argentina was declared there. After the Congress of Tucumán, the house was inhabited by diverse people and the deterioration became visible durint all those years, which is clearly evident in the famous photo taken by Angel Paganelli in 1869. The Government of Argentina acquired the historic house in 1874, being destinated to serve as a post office. In that building were held some celebrations to commemorate the Independence, starting in the 1880s.

Nevertheless, the government did not remodel the house until 1903, when it was demolished almost completely due to its very poor condition. The only room that was preserved from demolition was the room where the Independence was declared by the congressists. In 1942 the house was completely rebuilt, based on the original plans and the picture took by Paganelli in 1869. For that purpose, the same kind of bricks, tajas and baldoas were used

Other notable buildings of San Miguel are the Teatro San Martín (with some elements in neoclassical style), and the Correo Central, made in a mix of styles and a tower inspired in the palaces of Florence (specially Palazzo Vecchio), the old Legislature, the Palace of Justice, the Casino (former Savoy Hotel, built in 1912), the birthplace of Nicolás Avellaneda, the Colegio Nacional Bartolomé Mitre and the Campo de las Carreras, where the battle of Tucumán took place and now an historical park. 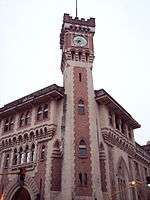 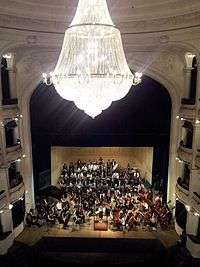 Interior of the San Martín theatre.

For decades, San Miguel de Tucumán has been one of the cultural spots in the country, in part due to the influence of the National University of Tucumán. It has been the birthplace and/or home of well-known personalities such as folk singer Mercedes Sosa, author Tomas Eloy Martínez, a professor at Rutgers University in the United States; musician Miguel Ángel Estrella, artist/architect Tomás Saraceno, painter Luis Lobo de la Vega, and many others.

Two large theatres (San Martín and Alberdi) and several smaller and independent theaters offer a wide array of events, including plays, concerts, operas, and ballet, all year round. The Septiembre Musical is by far the most important cultural event during the year. This music festival, generally held at Independence Square, brings together several local and national artists who perform different musical styles ranging from folk music to rock.

Since August 2008, the city has been the location of trials of high-ranking former military officers charged with war crimes from the 1976–83 dictatorship. Luciano Menéndez, a former colonel, was convicted for crimes against humanity, including the kidnapping and disappearance of senator (Guillermo Vargas Aignasse) on the night of the golpe (coup) in 1976. Many Abuelas de la Plaza de Mayo (Grandmothers of the Plaza de Mayo) have been seen in and around the Tucumán trials. The convictions of Menéndez and Ricardo Bussi were the first of this round of prosecution of military leaders of the Jorge Rafael Videla dictatorship. Their sentencings were seen as symbolic victories for the mothers and grandmothers whose children or husbands were "disappeared" by the military during that dark period of Argentine history.

Association football is the favourite sport in the city. San Miguel's main football clubs are Club Atlético San Martín de Tucumán and Club Atlético Tucumán. Club Atletico San Martin is based out of San Miguel de Tucuman and was founded in 1909. This team has won four total national titles (1944, 1988, 2005, and 2007-08) and several regional titles. The longtime rival, Club Atletico Tucuman, is also based in the city of San Miguel de Tucuman but was founded in 1901. This team is the oldest football club in the Tucuman Province and the team has five national titles (1959, 2004, 2005, 2007-08, and 2008-09) and also many regional titles.

The city is also a rugby union hotbed and hosts the Unión de Rugby de Tucumán, as well as the province's two most successful clubs: Tucumán Rugby Club and Universitario. The rugby of Tucumán is the second most powerful in the Argentine, behind the Rugby of the Buenos Aires Union. For eight times, the Naranjas (Oranges) won the Argentine Championship of Unions; this is the greatest number won by a hinterland union. Other important rugby clubs of the city are Natación y Gimnasia, Cardenales, Tucumán Lawn Tennis, Los Tarcos, amongst others. The fans of the rugby of Tucumán are the most passionate among the Argentines.

The city is served by several bus lines that have routes within the city limits, and some others that connect it to the neighbouring cities of Yerba Buena, El Manantial, Tafí Viejo, Las Talitas, Banda del Río Salí, and Alderetes. San Miguel de Tucumán enjoys one of the largest bus stations in Argentina. The 30,000 m² estación central de ómnibus (opened in 1994) is the point from where hundreds of bus services arrive from and depart to almost all of the largest and mid-size cities throughout the country.

The Teniente General Benjamín Matienzo International Airport (TUC/SANT) is the city's airport (though located 12 kilometres (7.5 mi) east of the city, in the neighboring department of Cruz Alta) serving over 290,000 passengers a year. There are daily flights to Buenos Aires, Jujuy, Santiago del Estero, Campo Arenal, the Minera Alumbrera Gold Mine, as well as international flights to Santa Cruz de la Sierra, Bolivia. The Mauricio Gilli Aerodrome is a Private Airport, located 16 kilometres (9.9 mi) west from the city, for Private Aviation. It is locally known as Aeroclub.

The city has also four railway stations, with only the Mitre Railway terminus operating passenger trains to Retiro in Buenos Aires, with intermediate stops in Santiago del Estero and Santa Fe provinces amongst other stations. The other train station active is Belgrano Railway station, originally built by the Córdoba Central Railway and currently operated by freight company Trenes Argentinos Cargas y Logística.

San Miguel de Tucuman lies in a transition zone between temperate climates to the south, and subtropical climates to the north. It has a humid subtropical climate (Cwa) under the Köppen climate classification, with vastly more precipitation in the summer than in the winter.[7] The average annual temperature is 19.3 °C (66.7 °F).[8] The precipitation pattern is monsoonal: out of the 966 mm (38.0 in) that fall annually, most of it falls in the summer months, while the winter months tend to be drier.[8]

Spring and fall are transition seasons.[9] Springs are very short, and by October, summer weather settles in the city, with highs beyond 30 °C (86.0 °F) very common. This is due to the dryness of the season: daytime highs are close to those in the summer, when rainfall and clouds are persistent, whereas spring is often sunny and arid. April marks the beginning of the fall, but temperatures remain near summer levels: 21 to 27 °C (69.8 to 80.6 °F) during the day, and 12 to 18 °C (53.6 to 64.4 °F) during the night. Rainfall decreases as fall progresses.

San Miguel de Tucuman is part of the Provincial Health System (Sistema Provincial de Salud or SIPROSA). This system divided the Tucuman province into four systematic areas with San Miguel being in its own area. Each area has its own public hospitals and Health Primary Attention Centers for the people. This divisions purpose was to help regulate health care assistance across the population and make it more accessible. Since then, SIPROSA has been a part of a modernizing program with the government in trying to make a successful medical records system. This would collect data from all the different resources and compile it into one database making it a lot easier and quicker for patients to pull up medical history, medical records, or anything of that nature. This is a big step for the Tucuman region.