San Roque is a small town and municipality in the south of Spain. It is part of the province of Cádiz, which in turn is part of the autonomous community of Andalusia. San Roque is situated a short way inland of the north side of the Bay of Gibraltar, just to the north of the Gibraltar peninsula. The municipality has a total surface of 145 km² with a population of approximately 25,500 people, as of 2005. Its name is Spanish for Saint Roch, a Christian saint who was revered in a shrine dating back to 1508 that predates the foundation of the town.

The area around San Roque has been inhabited since prehistoric times. The oldest known settlement within the municipality is the ruined town of Carteia, founded by the Phoenicians. It became a Phoenician tradepost and evolved into a Carthaginian town by 228 BCE. Its major trade was in local wine and garum or salazón, a fish-based sauce.[1]

Carteia was captured by Rome in 206 BCE. A few years later, in 171 BCE, Iberian-born children of Roman soldiers appeared before the Roman Senate to request a town to live in, and were given Carteia, named Colonia Libertinorum Carteia.

After the fall of Rome, the Vandals briefly established themselves in the area until 428 before they embarked on the conquest of North Africa, via an invasion fleet across the Strait of Gibraltar. The Visigoths replaced them around the 6th century. The Byzantine Empire made incursions into Andalusia between 554 and 626, occupying Carteia for a number of years, before finally being ejected by the Visigoths.

In 711, Carteia and the surrounding area became the beachhead for the Umayyad conquest of the Iberian Peninsula led by Tariq ibn Ziyad. Alfonso XI of Castile took control of the territory by defeating a Muslim Merinid army in the 14th century. Over the next few centuries, the population was gradually Hispanicised and Christianised.

In 1649 a quarter of the Gibraltar population perished from epidemic disease. A number of residents retreated to the area of San Roque, and survived the outbreak, believed to be typhoid.[2]

The modern settlement of San Roque was established by the former Spanish inhabitants of Gibraltar, after the majority fled following the takeover by Anglo-Dutch forces and their Spanish allies during the War of the Spanish Succession in 1704.[3] The establishment became a new town in 1706, addressed by King Philip V of Spain as "My city of Gibraltar resident in its Campo" and "My well beloved", because it remained loyal to his cause during the War of Succession. Gibraltar's City Council, banner and records were moved there. San Roque official motto is "Very Noble and Very Loyal city of San Roque, where Gibraltar lives on" (Spanish: Muy Noble y Muy Leal ciudad de San Roque, donde reside la de Gibraltar).

In 1873, during the Spanish First Republic, the town declared its independence as the Canton of San Roque for a few months.

The New Saint Roch's Chapel (Sp.: Ermita de San Roque) was erected in 1801. Its style is neoclassical. The shrine houses a statue of Saint Roch. In the fourth week of April every year, a procession is held on the saint's honour, with people carrying his image on a float. The statue is then taken from the temple to the Pinar del Rey pinewoods nearby and back. During the Spanish War of Independence, Saint Roch's Chapel was ransacked by the Napoleonic troops and the historic statue of the saint was destroyed. The image was replaced in 1833 by a new one donated by an army captain from San Roque called Juan Rojas, who was stationed in Seville. At the time this city was suffering from cholera epidemics, so Captain Rojas vowed to make the effigy himself if he and his family recovered from the disease. This happened indeed and the new image of Saint Roch was donated to the church by Rojas.

The parish church, Santa María La Coronada Church, is consecrated to Saint Mary the Crowned and it was declared a listed building in 1974. The main building dates from the 18th century and features Spanish-Tuscan architecture and Baroque artwork. Work began in 1735 on the construction of a church over the foundations of the 1508 Chapel of Saint Roch.[4]

The oldest bar in the town is the Bar Torres, adjacent to the central square.

The main economic activities are tourism and manufacturing. 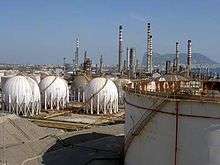 CEPSA Gibraltar-San Roque Refinery (Spanish: Refinería de Gibraltar-San Roque), built in 1967, is situated in Guadarranque Industrial Estate. It is the largest in the Iberian Peninsula, with a crude oil daily processing capacity of 240,000 barrels per day.[5]

Local San Roque Club is an important source of tourism. Sotogrande is an exclusive beach and golf resort located in the municipality.

The beaches of Campamento and Puente Mayorga, although no longer so popular as in the sixties due to the nearby industrial activity, are close to San Roque town, facing the Bay of Gibraltar.