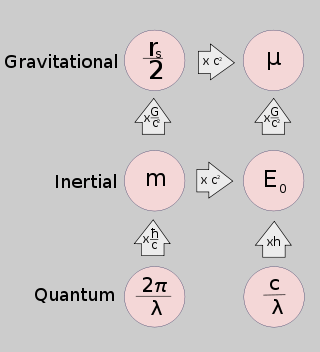 The relation between properties of mass and their associated physical constants. Every massive object is believed to exhibit all five properties. However, due to extremely large or extremely small constants, it is generally impossible to verify more than two or three properties for any object.

The Schwarzschild radius (sometimes historically referred to as the gravitational radius) is the radius of a sphere such that, if all the mass of an object were to be compressed within that sphere, the escape velocity from the surface of the sphere would equal the speed of light. An example of an object where the mass is within its Schwarzschild radius is a black hole. Once a stellar remnant collapses to or below this radius, light cannot escape and the object is no longer directly visible, thereby forming a black hole.[1] It is a characteristic radius associated with every quantity of mass. The Schwarzschild radius was named after the German astronomer Karl Schwarzschild, who calculated this exact solution for the theory of general relativity in 1916.

The Schwarzchild radius is given as

is the gravitational constant,

is the object mass and

In 1916, Karl Schwarzschild obtained the exact solution[3][4] to Einstein's field equations for the gravitational field outside a non-rotating, spherically symmetric body (see Schwarzschild metric). Using the definition M = Gm/c2, the solution contained a term of the form 1/2M − r; where the value of

making this term singular has come to be known as the Schwarzschild radius. The physical significance of this singularity, and whether this singularity could ever occur in nature, was debated for many decades; a general acceptance of the possibility of a black hole did not occur until the second half of the 20th century.

Black holes can be classified based on their Schwarzschild radius, or equivalently, by their density. As the radius is linearly related to mass, while the enclosed volume corresponds to the third power of the radius, small black holes are therefore much more dense than large ones. The volume enclosed in the event horizon of the most massive black holes has a density lower than main sequence stars.

It is thought that supermassive black holes like these do not form immediately from the singular collapse of a cluster of stars. Instead they may begin life as smaller, stellar-sized black holes and grow larger by the accretion of matter, or even of other black holes.

The Schwarzschild radius of the supermassive black hole at the Galactic Center would be approximately 13.3 million kilometres.[9]

Stellar black holes have much greater densities than supermassive black holes. If one accumulates matter at nuclear density (the density of the nucleus of an atom, about 1018 kg/m3; neutron stars also reach this density), such an accumulation would fall within its own Schwarzschild radius at about 3 M☉ and thus would be a stellar black hole.

A small mass has an extremely small Schwarzschild radius. A mass similar to Mount Everest[10][note 1] has a Schwarzschild radius much smaller than a nanometre.[note 2] Its average density at that size would be so high that no known mechanism could form such extremely compact objects. Such black holes might possibly be formed in an early stage of the evolution of the universe, just after the Big Bang, when densities were extremely high. Therefore, these hypothetical miniature black holes are called primordial black holes.

Gravitational time dilation near a large, slowly rotating, nearly spherical body, such as the Earth or Sun can be reasonably approximated using the Schwarzschild radius as follows:

The results of the Pound–Rebka experiment in 1959 were found to be consistent with predictions made by general relativity. By measuring Earth’s gravitational time dilation, this experiment indirectly measured Earth’s Schwarzschild radius.

The Newtonian gravitational field near a large, slowly rotating, nearly spherical body can be reasonably approximated using the Schwarzschild radius as follows:

Therefore, on dividing above by below:

On the surface of the Earth:

For all circular orbits around a given central body:

r is the orbit radius;
rs is the Schwarzschild radius of the gravitating central body;
v is the orbital speed;
c is the speed of light in vacuum.

This equality can be generalized to elliptic orbits as follows:

a is the semi-major axis;
T is the orbital period.

For the Earth orbiting the Sun:

This final equation indicates that an object orbiting at the speed of light would have an orbital radius of 1.5 times the Schwarzschild radius. This is a special orbit known as the photon sphere.

For the Planck mass

and the Compton wavelength

are of the same order as the Planck length

Classification of black holes by type:

A classification of black holes by mass: