For a spherically symmetric massive body such as a star or planet, the escape velocity for that body, at a given distance is calculated by the formula[3]

When given a speed

greater than the escape speed

the object will asymptotically approach the hyperbolic excess speed

In these equations atmospheric friction (air drag) is not taken into account. A rocket moving out of a gravity well does not actually need to attain escape velocity to escape, but could achieve the same result (escape) at any speed with a suitable mode of propulsion and sufficient propellant to provide the accelerating force on the object to escape. Escape velocity is only required to send a ballistic object on a trajectory that will allow the object to escape the gravity well of the mass M. 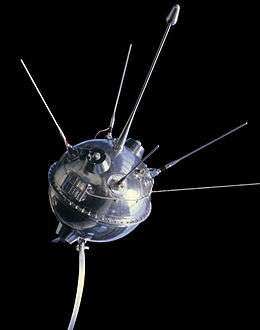 Luna 1, launched in 1959, was the first man-made object to attain escape velocity from Earth (see below table).[5]

The existence of escape velocity is a consequence of conservation of energy. For an object with a given total energy, which is moving subject to conservative forces (such as a static gravity field) it is only possible for the object to reach combinations of places and speeds which have that total energy; and places which have a higher potential energy than this cannot be reached at all.

For a given gravitational potential energy at a given position, the escape velocity is the minimum speed an object without propulsion needs to be able to "escape" from the gravity (i.e. so that gravity will never manage to pull it back). For the sake of simplicity, unless stated otherwise, we will assume that an object is attempting to escape from a uniform spherical planet by moving directly away from it (along a radial line away from the center of the planet) and that the only significant force acting on the moving object is the planet's gravity.

Escape velocity is actually a speed (not a velocity) because it does not specify a direction: no matter what the direction of travel is, the object can escape the gravitational field (provided its path does not intersect the planet). The simplest way of deriving the formula for escape velocity is to use conservation of energy. Imagine that a spaceship of mass m is at a distance r from the center of mass of the planet, whose mass is M. Its initial speed is equal to its escape velocity,

. At its final state, it will be an infinite distance away from the planet, and its speed will be negligibly small and assumed to be 0. Kinetic energy K and gravitational potential energy Ug are the only types of energy that we will deal with, so by the conservation of energy,

The same result is obtained by a relativistic calculation, in which case the variable r represents the radial coordinate or reduced circumference of the Schwarzschild metric.[6][7]

Defined a little more formally, "escape velocity" is the initial speed required to go from an initial point in a gravitational potential field to infinity and end at infinity with a residual speed of zero, without any additional acceleration.[8] All speeds and velocities measured with respect to the field. Additionally, the escape velocity at a point in space is equal to the speed that an object would have if it started at rest from an infinite distance and was pulled by gravity to that point. In common usage, the initial point is on the surface of a planet or moon. On the surface of the Earth, the escape velocity is about 11.2 km/s, which is approximately 33 times the speed of sound (Mach 33) and several times the muzzle velocity of a rifle bullet (up to 1.7 km/s). However, at 9,000 km altitude in "space", it is slightly less than 7.1 km/s.

The barycentric escape velocity is independent of the mass of the escaping object. It does not matter if the mass is 1 kg or 1,000 kg, what differs is the amount of energy required. For an object of mass

Ignoring all factors other than the gravitational force between the body and the object, an object projected vertically at speed

from the surface of a spherical body with escape velocity

will attain a maximum height

which, solving for h results in

is the ratio of the original speed

to the escape velocity

If an object attains escape velocity, but is not directed straight away from the planet, then it will follow a curved path. Although this path does not form a closed shape, it is still considered an orbit. Assuming that gravity is the only significant force in the system, this object's speed at any point in the orbit will be equal to the escape velocity at that point (due to the conservation of energy, its total energy must always be 0, which implies that it always has escape velocity; see the derivation above). The shape of the orbit will be a parabola whose focus is located at the center of mass of the planet. An actual escape requires a course with an orbit that does not intersect with the planet, or its atmosphere, since this would cause the object to crash. When moving away from the source, this path is called an escape orbit. Escape orbits are known as C3 = 0 orbits. C3 is the characteristic energy, = −GM/a, where a is the semi-major axis, which is infinite for parabolic orbits.

When there are many gravitating bodies, such as in the solar system, a rocket that travels at escape velocity from one body, say Earth, will not travel to an infinite distance because it needs an even higher speed to escape the Sun's gravity. Near the Earth, the rocket's orbit will appear parabolic, but will become an ellipse around the Sun, except when it is perturbed by the Earth, whose orbit it must still intersect, and other bodies.

Because of the atmosphere it is not useful and hardly possible to give an object near the surface of the Earth a speed of 11.2 km/s (40,320 km/h), as these speeds are too far in the hypersonic regime for most practical propulsion systems and would cause most objects to burn up due to aerodynamic heating or be torn apart by atmospheric drag. For an actual escape orbit a spacecraft is first placed in low Earth orbit (160–2,000 km) and then accelerated to the escape velocity at that altitude, which is a little less — about 10.9 km/s. The required change in speed, however, is far less because from a low Earth orbit the spacecraft already has a speed of approximately 8 km/s (28,800 km/h).

To expand upon the derivation given in the Overview section,

The escape velocity at a given height is

times the speed in a circular orbit at the same height, (compare this with the velocity equation in circular orbit). This corresponds to the fact that the potential energy with respect to infinity of an object in such an orbit is minus two times its kinetic energy, while to escape the sum of potential and kinetic energy needs to be at least zero. The velocity corresponding to the circular orbit is sometimes called the first cosmic velocity, whereas in this context the escape velocity is referred to as the second cosmic velocity.[15]

For a body with a spherically-symmetric distribution of mass, the barycentric escape velocity

This is the minimal required kinetic energy to be able to reach infinity, so the escape velocity v0 satisfies