The Muromachi period (室町時代, Muromachi jidai, also known as the Muromachi era, the Ashikaga era, or the Ashikaga period) is a division of Japanese history running from approximately 1336 to 1573. The period marks the governance of the Muromachi or Ashikaga shogunate (Muromachi bakufu or Ashikaga bakufu), which was officially established in 1338 by the first Muromachi shogun, Ashikaga Takauji, two years after the brief Kenmu Restoration (1333–36) of imperial rule was brought to a close. The period ended in 1573 when the 15th and last shogun of this line, Ashikaga Yoshiaki, was driven out of the capital in Kyoto by Oda Nobunaga.

From a cultural perspective, the period can be divided into the Kitayama and Higashiyama periods (later 15th – early 16th).

The early years from 1336 to 1392 of the Muromachi period are known as the Nanboku-chō or Northern and Southern Court period. This period is marked by the continued resistance of the supporters of Emperor Go-Daigo, the emperor behind the Kenmu Restoration. The years from 1465 to the end of the Muromachi period are also known as the Sengoku period or Warring States period. 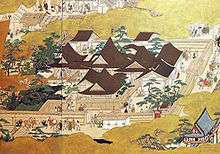 Emperor Go-Daigo's brief attempt to restore the imperial power in the Kenmu Restoration alienated the samurai class. Ashikaga Takauji obtained the samurai's strong support, and deposed Emperor Go-Daigo. In 1338 Takauji was proclaimed shogun and established his government in Kyoto. However, Emperor Godaigo escaped from his confinement and revived his political power in Nara. The ensuing period of Ashikaga rule (1336–1573) was called Muromachi from the district of Kyoto in which its headquarters – the Hana-no-gosho (花の御所, Flower Palace) – were located by third shogun Ashikaga Yoshimitsu in 1378. What distinguished the Ashikaga shogunate from that of Kamakura was that, whereas Kamakura had existed in equilibrium with the imperial court, Ashikaga took over the remnants of the imperial government. Nevertheless, the Ashikaga shogunate was not as strong as that in Kamakura had been, and was greatly preoccupied with civil war. Not until the rule of Ashikaga Yoshimitsu (as shogun, 1368–94, and chancellor, 1394–1408) did a semblance of order emerge.

Yoshimitsu allowed the constables, who had had limited powers during the Kamakura period, to become strong regional rulers, later called daimyō. In time, a balance of power evolved between the shogun and the daimyō; the three most prominent daimyō families rotated as deputies to the shogun at Kyoto. Yoshimitsu was finally successful in reunifying the Northern and Southern courts in 1392, but, despite his promise of greater balance between the imperial lines, the Northern Court maintained control over the throne thereafter. The line of shoguns gradually weakened after Yoshimitsu and increasingly lost power to the daimyō and other regional strongmen. The shogun's influence on imperial succession waned, and the daimyō could back their own candidates.

In time, the Ashikaga family had its own succession problems, resulting finally in the Ōnin War (1467–77), which left Kyoto devastated and effectively ended the national authority of the bakufu. The power vacuum that ensued launched a century of anarchy (see Provincial Wars and Foreign Contacts).

The Japanese contact with the Ming dynasty (1368–1644) began when China was renewed during the Muromachi period after the Chinese sought support in suppressing Japanese pirates in coastal areas of China. Japanese pirates of this era and region were referred to as wokou by the Chinese (Japanese wakō). Wanting to improve relations with China and to rid Japan of the wokou threat, Yoshimitsu accepted a relationship with the Chinese that was to last for half a century. In 1401 he restarted the tribute system, describing himself in a letter to the Chinese Emperor as "Your subject, the King of Japan". Japanese wood, sulfur, copper ore, swords, and folding fans were traded for Chinese silk, porcelain, books, and coins, in what the Chinese considered tribute but the Japanese saw as profitable trade.

During the time of the Ashikaga bakufu, a new national culture, called Muromachi culture, emerged from the bakufu headquarters in Kyoto to reach all levels of society, strongly influenced by Zen Buddhism.

Zen played a central role in spreading not only religious teachings and practices but also art and culture, including influences derived from paintings of the Chinese Song (960-1279), Yuan, and Ming dynasties. The proximity of the imperial court to the bakufu resulted in a commingling of imperial family members, courtiers, daimyō, samurai, and Zen priests. Art of all kinds—architecture, literature, Noh drama, Kyōgen (comedy), poetry, sarugaku (folk entertainment), the tea ceremony, landscape gardening, and flower arranging—all flourished during Muromachi times.

Music scene during the Muromachi period (1538)

There was renewed interest in Shinto, which had quietly coexisted with Buddhism during the centuries of the latter's predominance. Shinto, which lacked its own scriptures and had few prayers, had, as a result of syncretic practices begun in the Nara period, widely adopted Shingon Buddhist rituals. Between the eighth and fourteenth centuries, Shintoism was nearly totally absorbed by Buddhism, becoming known as Ryōbu Shinto (Dual Shinto).

The Mongol invasions in the late thirteenth century, however, evoked a national consciousness of the role of the kamikaze in defeating the enemy. Less than fifty years later (1339–43), Kitabatake Chikafusa (1293–1354), the chief commander of the Southern Court forces, wrote the Jinnō Shōtōki. This chronicle emphasized the importance of maintaining the divine descent of the imperial line from Amaterasu to the current emperor, a condition that gave Japan a special national polity (kokutai). Besides reinforcing the concept of the emperor as a deity, the Jinnōshōtōki provided a Shinto view of history, which stressed the divine nature of all Japanese and the country's spiritual supremacy over China and India.

The Ōnin War (1467–77) led to serious political fragmentation and obliteration of domains: a great struggle for land and power ensued among bushi chieftains and lasted until the mid-sixteenth century. Peasants rose against their landlords and samurai against their overlords as central control virtually disappeared. The imperial house was left impoverished, and the bakufu was controlled by contending chieftains in Kyoto. The provincial domains that emerged after the Ōnin War were smaller and easier to control. Many new small daimyō arose from among the samurai who had overthrown their great overlords. Border defenses were improved, and well fortified castle towns were built to protect the newly opened domains, for which land surveys were made, roads built, and mines opened. New house laws provided practical means of administration, stressing duties and rules of behavior. Emphasis was put on success in war, estate management, and finance. Threatening alliances were guarded against through strict marriage rules. Aristocratic society was overwhelmingly military in character. The rest of society was controlled in a system of vassalage. The shōen (feudal manors) were obliterated, and court nobles and absentee landlords were dispossessed. The new daimyō directly controlled the land, keeping the peasantry in permanent serfdom in exchange for protection.

Economic effect of wars between states

Most wars of the period were short and localized, although they occurred throughout Japan. By 1500 the entire country was engulfed in civil wars. Rather than disrupting the local economies, however, the frequent movement of armies stimulated the growth of transportation and communications, which in turn provided additional revenues from customs and tolls. To avoid such fees, commerce shifted to the central region, which no daimyō had been able to control, and to the Inland Sea. Economic developments and the desire to protect trade achievements brought about the establishment of merchant and artisan guilds. 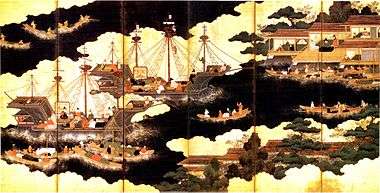 By the end of the Muromachi period, the first Europeans had arrived. The Portuguese landed in southern Kyūshū in 1543 and within two years were making regular port calls, initiating the century-long Nanban trade period. The Spanish arrived in 1587, followed by the Dutch in 1609. The Japanese began to attempt studies of European civilization in depth, and new opportunities were presented for the economy, along with serious political challenges. European firearms, fabrics, glassware, clocks, tobacco, and other Western innovations were traded for Japanese gold and silver. Significant wealth was accumulated through trade, and lesser daimyō, especially in Kyūshū, greatly increased their power. Provincial wars became more deadly with the introduction of firearms, such as muskets and cannons, and greater use of infantry. 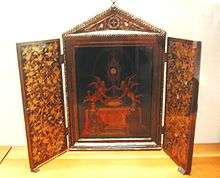 Christianity affected Japan, largely through the efforts of the Jesuits, led first by the Spanish Saint Francis Xavier (1506–1552), who arrived in Kagoshima in southern Kyūshū in 1549. Both daimyō and merchants seeking better trade arrangements as well as peasants were among the converts. By 1560 Kyoto had become another major area of missionary activity in Japan. In 1568 the port of Nagasaki, in northwestern Kyūshū, was established by a Christian daimyō and was turned over to Jesuit administration in 1579. By 1582 there were as many as 150,000 converts (two percent of the population) and 200 churches. But bakufu tolerance for this alien influence diminished as the country became more unified and openness decreased. Proscriptions against Christianity began in 1587 and outright persecutions in 1597. Although foreign trade was still encouraged, it was closely regulated, and by 1640, in the Tokugawa Period, the exclusion and suppression of Christianity became national policy.