This article is about the Yayoi period in Japanese history. For other uses, see Yayoi (disambiguation).

The Yayoi period (弥生時代, Yayoi jidai) is an Iron Age era in the history of Japan traditionally dated 300 BCE to 300 CE.[1] It is named after the neighborhood of Tokyo where archaeologists first uncovered artifacts and features from that era. Distinguishing characteristics of the Yayoi period include the appearance of new Yayoi pottery styles and the start of an intensive rice agriculture in paddy fields. A hierarchical social class structure dates from this period. Techniques in metallurgy based on the use of bronze and iron were also introduced to Japan in this period.

The Yayoi followed the Jōmon period (13,000–400 BCE) and Yayoi culture flourished in a geographic area from southern Kyūshū to northern Honshū. Archaeological evidence supports the idea that during this time, an influx of farmers from the Asian continent to Japan absorbed or overwhelmed the native hunter-gatherer population. 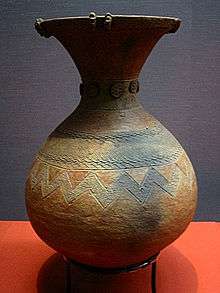 The Yayoi period is traditionally dated from 300 BCE to 300 CE.[1] The earliest archaeological evidence of the Yayoi is found on northern Kyūshū,[2] but that is still debated. Yayoi culture quickly spread to the main island of Honshū, mixing with native Jōmon culture.[3] A recent study that used accelerator mass spectrometry to analyze carbonized remains on pottery and wooden stakes, suggests that they dated back to 900–800 BCE, 500 years earlier than previously believed.[4]

Yayoi pottery was simply decorated and produced on a potter's wheel, as opposed to Jōmon pottery, which was produced by hand. Yayoi craft specialists made bronze ceremonial bells (dōtaku), mirrors, and weapons. By the 1st century CE, Yayoi farmers began using iron agricultural tools and weapons.

As the Yayoi population increased, the society became more stratified and complex. They wove textiles, lived in permanent farming villages, and constructed buildings with wood and stone. They also accumulated wealth through land ownership and the storage of grain. Such factors promoted the development of distinct social classes. Contemporary Chinese sources described the people as having tattoos and other bodily markings which indicated differences in social status.[5] Yayoi chiefs, in some parts of Kyūshū, appear to have sponsored, and politically manipulated, trade in bronze and other prestige objects.[6] That was possible by the introduction of an irrigated, wet-rice culture from the Yangtze estuary in southern China via the Ryukyu Islands or Korean Peninsula.[1][7] Wet-rice agriculture led to the development and growth of a sedentary, agrarian society in Japan. Local political and social developments in Japan were more important than the activities of the central authority within a stratified society.

Direct comparisons between Jōmon and Yayoi skeletons show that the two peoples are noticeably distinguishable.[8] The Jōmon tended to be shorter, with relatively longer forearms and lower legs, more wide-set eyes, shorter and wider faces, and much more pronounced facial topography. They also have strikingly raised brow ridges, noses, and nose bridges. Yayoi people, on the other hand, averaged an inch or two taller, with close-set eyes, high and narrow faces, and flat brow ridges and noses. By the Kofun period, almost all skeletons excavated in Japan except those of the Ainu are of the Yayoi type,[9] resembling those of modern-day Japanese.[10]

Origin of the Yayoi people 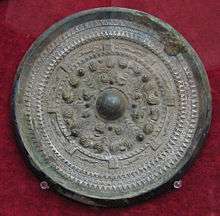 The earliest archaeological sites are Itazuke or Nabata in the northern part of Kyūshū. The origin of Yayoi culture has long been debated. Chinese influence was obvious in the bronze and copper weapons, dōkyō, dōtaku, as well as irrigated paddy rice cultivation. Three major symbols of Yayoi culture are the bronze mirror, the bronze sword, and the royal seal stone.

In recent years, more archaeological and genetic evidence has been found in eastern China and western Japan to lend credibility to this argument. Between 1996 and 1999, a team led by Satoshi Yamaguchi, a researcher at Japan's National Science Museum, compared Yayoi remains found in Japan's Yamaguchi and Fukuoka prefectures with those from China's coastal Jiangsu province and found many similarities between the Yayoi and the Jiangsu remains.[11] DNA tests in 1999 support the theory that the origin of the Yayoi people was an area south of the Yangtze.[12]

One view of Yayoi culture — which caught the popular imagination like the theory of a later "invasion" of Japan by horse riders — is that it is connected with the Xu Fu naval expedition dispatched by Qin Shi Huang in 219 B.C. to search for the Taoist isles of the immortals. This was an elaborately mounted and well-stocked expedition, lacking nothing, as the romanticized story goes. Xu Fu reappeared some nine years later with a request for more bowmen, and his description of the islands he visited fits Japan. But iron and bronze did not arrive in Japan at the same time, not even as close as the nine years between the two visits. Even less likely is the introduction of rice by Xu Fu, as his fleet departed from the Shandong coast, far north of the rice-growing areas of China. 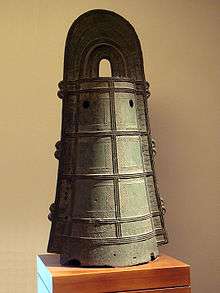 However, some scholars argue that the rapid increase of roughly four million people in Japan between the Jōmon and Yayoi periods cannot be explained by migration alone. They attribute the increase primarily to a shift from a hunter-gatherer to an agricultural diet on the islands, with the introduction of rice. It is quite likely that rice cultivation and its subsequent deification allowed for mass population increase. Regardless, there is archaeological evidence that supports the idea that there was an influx of farmers from the continent to Japan that absorbed or overwhelmed the native hunter-gatherer population.[14]

Some pieces of Yayoi pottery clearly show the influence of Jōmon ceramics. In addition, the Yayoi lived in the same type of pit or circular dwelling as that of the Jōmon. Other examples of commonality are chipped stone tools for hunting, bone tools for fishing, shells in bracelet construction, and lacquer decoration for vessels and accessories.

The golden seal said to have been granted to the "King of Wa" by Emperor Guangwu of Han in 57 CE. It is inscribed King of Na of Wa in Han Dynasty (漢委奴國王)

The earliest written records about people in Japan are from Chinese sources from this period. Wa, the Japanese pronunciation of an early Chinese name for Japan, was mentioned in 57 CE; the Na state of Wa received a golden seal from the Emperor Guangwu of the Later Han dynasty. This event was recorded in the Hou Han Shu compiled by Fan Ye in the 5th century. The seal itself was discovered in northern Kyūshū in the 18th century.[15] Wa was also mentioned in 257 in the Wei zhi, a section of the San Guo Zhi compiled by the 3rd century scholar Chen Shou.[16]

Early Chinese historians described Wa as a land of hundreds of scattered tribal communities rather than the unified land with a 700-year tradition as laid out in the 8th-century work Nihon Shoki, a partly mythical, partly historical account of Japan which dates the foundation of the country at 660 BCE. Archaeological evidence also suggests that frequent conflicts between settlements or statelets broke out in the period. Many excavated settlements were moated or built at the tops of hills. Headless human skeletons[17] discovered in Yoshinogari site are regarded as typical examples of finds from the period. In the coastal area of the Inland Sea, stone arrowheads are often found among funerary objects.

The Wei Zhi (Chinese: 魏志), which is part of the San Guo Zhi, first mentions Yamataikoku and Queen Himiko in the 3rd century. According to the record, Himiko assumed the throne of Wa, as a spiritual leader, after a major civil war. Her younger brother was in charge of the affairs of state, including diplomatic relations with the Chinese court Kingdom of Wei.[18] When asked about their origins by the Wei embassy, the people of Wa claimed to be descendants of the Grand Count Tàibó of Wu, a historic figure of the Wu Kingdom around the Yangtze Delta of China.

For many years, the location of Yamataikoku and the identity of Queen Himiko have been subject of research. Two possible sites, Yoshinogari in Saga Prefecture and Makimuku in Nara Prefecture have been suggested.[19] Recent archaeological research in Makimuku suggests that Yamataikoku was located in the area.[20][21] Some scholars assume that the Hashihaka kofun in Makimuku was the tomb of Himiko. Its relation to the origin of the Yamato polity in the following Kofun period is also under debate.