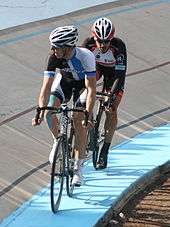 Vanmarcke and Fabian Cancellara in the climax of the 2013 Paris–Roubaix. Cancellara out-sprinted Vanmarcke for victory at the velodrome in Roubaix.

Vanmarcke was born in Kortrijk. He took the biggest win of his career to date on the 2012 Omloop Het Nieuwsblad, attacking fiercely twice. The first attack came on the Molenberg climb, thinning the field, and he attacked again on the 'Lange Munte' cobbled section to reduce the lead group to only two competitors, Juan Antonio Flecha (Team Sky) and Tom Boonen (Omega Pharma–Quick-Step). He outsprinted them to claim the victory.[3]

In 2013, Vanmarcke was focusing on the Classics, but he injured his knee in a crash at Tirreno–Adriatico, which hindered his form for the first important one-day races of the season. He nonetheless participated in the Tour of Flanders, finishing 3 minutes in arrears of Fabian Cancellara.[4] A week later, he finished second to Cancellara in Paris–Roubaix. He escaped with Stijn Vandenbergh after cobbled sector 6 but was joined later on by Cancellara and Zdeněk Štybar. On the cobbled section Carrefour de l'Arbre, Štybar and Vandenbergh were dispatched one-by-one because they collided with spectators.[5] Vanmarcke lost the 2-man sprint contested in the velodrome and was emotional afterward, since he had come so close to victory.[6]

In 2014, Vanmarcke showed excellent form in the classics, with fourth place in Omloop Het Nieuwsblad and third in Kuurne–Brussels–Kuurne the following day. He also recorded top five finishes in E3 Harelbeke (fifth) and Gent–Wevelgem (fourth). In the Tour of Flanders, Vanmarcke was the only rider able to follow Cancellara's attack on the final climb of the Paterberg. The pair caught up with the two earlier escapees, Vandenbergh and Greg Van Avermaet. The race came down to a sprint between the four, with Cancellara emerging victorious ahead of Van Avermaet and Vanmarcke.