E3 Harelbeke, previously known as Harelbeke–Antwerp–Harelbeke and E3-Prijs Vlaanderen, is an annual road cycling race in Flanders, Belgium. The race starts and finishes in Harelbeke, covering 203 kilometres,[1] mainly in the Flemish Ardennes.

First raced in 1958, it is one of the more recently founded one-day classics, but has developed into a highly prestigious and desirable event.[2] It is on the UCI World Tour calendar, as the competition's first cobbled classic of the season.

E3 Harelbeke is held on the last Friday of March and marks the start of the Flemish Cycling Week, opening up a fortnight of WorldTour racing on the cobbles and bergs of Flanders.[2] It is the second in the series of cobbled races in Belgium and northern France that take place over a two-week period from the Wednesday after Milan–San Remo until Paris–Roubaix. E3 Harelbeke is the race that resembles the Tour of Flanders the most.[3]

In 2010, UCI made some calendar changes, most notably positioning the Pro Tour race Gent–Wevelgem on the day after E3 Harelbeke, causing a dispute between the two races.[4] In 2012, when the E3 race was upgraded to World Tour status as well, organizers changed the date of their event to Friday to meet the demands of UCI, who requested a day of rest between two arduous World Tour events.[5]

Because of its place on the calendar, the race has built a reputation as the final rehearsal for the more prestigious Tour of Flanders, the Flemish monument race coming nine days after the E3 Harelbeke.[6] With a distance of 200–215 km, the E3 route is shorter than the Tour of Flanders, but addresses many of the same roads and hills of the Flemish Ardennes.[7] With cobbles, steep climbs, winding and narrow roads, and often affected by wind, it offers all race circumstances that characterize Flemish classic races.[3] Favourites for the Tour of Flanders often do well in Harelbeke, eager to win the race and using it as the perfect testing ground. Because of the similarities, Flemish media have dubbed the race The little Tour of Flanders.[8][9][10]

The E3 Harelbeke was created in 1958. The first editions were raced from Harelbeke to Antwerp and back, hence the event was named Harelbeke-Antwerp-Harelbeke. Belgian cycling icon Rik Van Looy won the race four times in the 1960s. E3 does not refer to a race sponsor; the race was renamed E3-Prijs Harelbeke in the early 1960s, as a reference to the former European route E03, a series of European highways from Lisbon to Stockholm.[11] The Belgian part of the E3 - now called E17 - connected Antwerp and Kortrijk, close to Harelbeke. 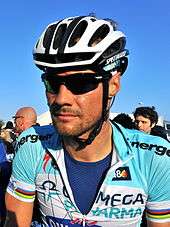 Although the race is much younger than many other cycling classics in Flanders, it quickly became a desirable entry for specialists of the cobbled races. Many winners on the roll of honour have also won the Tour of Flanders or Paris–Roubaix in their careers. Classics specialist Jan Raas won the race three consecutive times in the early 1980s. In the 1990s Johan Museeuw and Andrei Tchmil won their first important one-day races in Harelbeke, before winning cycling's most prestigious cobbled classics.[3][12]

Since the first edition until 2011, the race was held on a Saturday in the weekend before the Tour of Flanders, forming a tandem with the Brabantse Pijl on Sunday. From 2005 until 2011 the race was part of the continental UCI Europe Tour, where it was classified as a 1.HC race. Belgian Tom Boonen, claiming four consecutive wins, and Swiss Fabian Cancellara were the main protagonists with some spectacular victories, and the event garnered a lot of prestige on the international calendar.[13][14][15][16]

In 2012 the race was upgraded to World Tour level, cycling's highest level of professional races. Tom Boonen won the edition, setting a record of five victories, and the race was officially named E3 Harelbeke.[11] In 2013 Fabian Cancellara claimed his third win after a long-distance attack on the Oude Kwaremont and a 35 km solo raid to the finish.[17] The most recent winners of E3 Harelbeke are Slovak Peter Sagan and Britain's Geraint Thomas, thereby cementing its reputation as a foremost cobbled classic.[18][19]

Usually a little over 200 kilometres long and always starting and finishing in Harelbeke, the E3 Harelbeke contains anything between 12 and 17 short, sharp, cobbled climbs, mainly in the last 90 kilometres. As usual in Flemish one-day racing, local knowledge can be crucial.[2]

The race starts from Harelbeke's Grote Markt and travels east, the first 110 km flat with cobbles around Oudenaarde and Zottegem. The riders reach the most easterly point at Ninove after 85 km and after swinging west and going through Geraardsbergen and Brakel, the tough part begins with a succession of short, sharp climbs some of which are cobbled as the race loops between Ronse and Oudenaarde.

The first categorized ascent in E3 Harelbeke is traditionally the Leberg, which comes shortly after a quick spin through the town of Oudenaarde, where Belgium’s top cobbled Classic, the Ronde van Vlaanderen/Tour des Flandres finishes nine days later. After that, round about the halfway point, E3’s main series of climbs begins. The Paterberg and Oude Kwaremont are notoriously difficult bergs where the race tends to split apart for good, whilst the Tiegemberg, the last climb of the day, comes at 16 kilometres from the finish.

Profile of the 2012 edition

The 12 hills in order of appearance are La Houppe, Berg ten Stene, Boigneberg, Eikenberg, Stationsberg, Taaienberg, Kruisberg, Kapelleberg, Paterberg, Oude Kwaremont, Knokteberg and Tiegemberg. The Paterberg is a cobbled 300m climb that averages 12.5%, while the Oude Kwaremont is 2200m, of which 1500m cobbled, with a gradient average of 4.2%.

Riders in italics are still active.