The race is particularly known for its long sections of dirt roads: the race's name comes the strade bianche – "white roads" – that form large sections of the route. The race is also hilly throughout, with the finish coming after a particularly difficult climb into Siena.

Traditionally the Strade Bianche is the first of a pair of races alongside the Roma Maxima; the latter event, however, was cancelled in 2015 due to "organisational problems".[2] 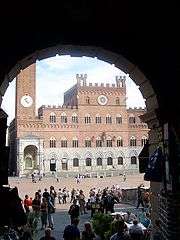 The Piazza del Campo in Siena

The Strade Bianche is part of the spring classics season, which begins the week before with the Belgian races Omloop Het Nieuwsblad and Kuurne–Brussels–Kuurne. Many of the same riders then travel to Tuscany to take part in the Strade Bianche.[3]

The race is unique in the cycling season. Many of the early season races include the cobbles of Flanders and northern France; the Strade Bianche, however, includes various extended sections of strade bianche, the dirt roads that give the race its name. These are often farm tracks and include both climbs and descents, as well as various additional challenges such as uneven surfaces, steep grades, and potholes; the longest such section covers a distance of 11.5 km (7.1 mi). There are ten sections of strade bianche, with the last coming 12 km (7 mi) from the finish in Siena.[3][4][5] The race is often decided, however, on the final climb. This comes in the final part of the race: a 1 km (0.6 mi) climb into the city, followed by a descent into the finish in the Piazza del Campo.[6]

The previous year's champion, Michał Kwiatkowski (Etixx–Quick-Step), was not selected for the 2015 race; he began participation in the Paris–Nice the following day. The runner up from 2014, Peter Sagan (Tinkoff–Saxo) was one of the favourites for the event. Another was Fabian Cancellara (Trek Factory Racing), who had won the race in 2008 and 2012.[8]

20 teams were selected to take part in the race. 14 of them were UCI WorldTeams and the remaining six were UCI Professional Continental teams.[10]

An early breakaway was formed by Stefano Pirazzi (Bardiani–CSF), Giacomo Berlato and Daniele Colli (both Nippo–Vini Fantini)), Giuseppe Fonzi (Southeast Pro Cycling), Artem Ovechkin (RusVelo), David Lozano (Team Novo Nordisk), Julian Arredondo (Trek Factory Racing) and Ilia Koshevoy (Lampre–Merida). This move was ended by attacks from the peloton behind on the Monte Sante Marie, which led to the formation of a new group of riders, including favourites for the race win including Fabian Cancellara, Zdeněk Štybar, Alejandro Valverde, Greg Van Avermaet and Peter Sagan. This group earned a large lead, and attacks in the remaining kilometres reduced the race to three main groups. The first of these included Valverde, Van Avermaet and Stybar. Sep Vanmarcke (LottoNL–Jumbo) was chasing alone behind them, with another group of Cancellara, Diego Rosa (Astana) and Daniel Oss (BMC Racing Team) behind.

Coming into the final climb, Valverde was the favourite from the leading group, as he was seen as the best climber of the three and the final climb into Siena was difficult. Valverde, however, had put significant effort into keeping the leading group clear of the chasers, and he was unable to respond to an attack from Greg Van Avermaet at the bottom of the climb. Stybar held Van Avermaet's wheel and was able to pass him as the riders entered the Piazza del Campo to take the race win. Van Avermaet was second and Valverde third, with Vanmarcke holding on alone for fourth place.[11][12][13]