i/ˈskwɪm/ is a city in Clallam County, Washington, United States. As of the 2010 census counted a population of 6,606. [Sequim School District population served is a little over 29,000. Sequim and the area around Sequim has a population of about 28,000] Sequim is located along the Dungeness River near the base of the Olympic Mountains. The city has been increasing in population dramatically in recent years due to the influx of retirees from the Puget Sound region and California.

Sequim lies within the rain shadow of the Olympic Mountains and receives on average less than 16 inches (410 mm) of rain per year—about the same as Los Angeles, California—and has given itself the nickname of Sunny Sequim. Yet the city is fairly close to some of the wettest temperate rainforests of the contiguous United States. This climate anomaly is sometimes called the blue hole of Sequim.[5] Fogs and cool breezes from the Juan de Fuca Strait make Sequim's environment more humid than would be expected from the low average annual precipitation. Some places have surprisingly luxuriant forests dominated by Douglas-fir and western red cedar. Black cottonwood, red alder, bigleaf maple, Pacific madrone, lodgepole pine, and Garry oak can also be large. Historically, much of the area was an open oak-studded prairie supported by somewhat excessively drained gravelly sandy loam soil, though agriculture and development of the Dungeness valley have changed this ecosystem. Most soils under Sequim have been placed in a series which is named after the city.[6] This "Sequim series" is one of the few Mollisols in western Washington and its high base saturation, a characteristic of the Mollisol order, is attributed to the minimal leaching of bases caused by low annual rainfall.[7]

The city and the surrounding area are particularly known for the commercial cultivation of lavender, supported by the unique climate: it makes Sequim the "Lavender Capital of North America", rivaled only in France. The area is also known for its Dungeness crab.

Sequim is pronounced as one syllable, with the e elided: "skwim". The name evolved from the Klallam language. 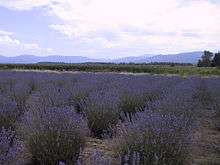 A lavender farm in Sequim, Washington

Fossils discovered in the late 1970s at a dig known as the Manis Mastodon Site, near Sequim, by Carl Gustafson, an archaeologist at Washington State University included a mastodon bone with an embedded bone point, evidencing the presence of hunters in the area about 14,000 years ago. According to Michael R. Waters, an archaeologist at Texas A&M University, this discovery is the first hunting weapon found that dates to the pre-Clovis period.

The S'Klallam tribe had inhabited the region prior to the arrival of the first Europeans. S'Klallam means "the strong people". The band of S'Klallam Indians disbanded into their own individual federally recognized tribes in the early 1900s. The local Tribe is the Jamestown S'Klallam Tribe named after one of their early leaders, Lord James Balch. According to other tales the town Sequim in S'Klallam means "a place for going to shoot" which represents the abundance of game and wildlife of the area.[12] [13] Both Manuel Quimper and George Vancouver explored the region's coast in the 1790s.

The first European settlers arrived in the Dungeness Valley in the 1850s, settling nearby Dungeness, Washington. While the lands along the river became fertile farmlands, the remainder of the area remained arid prairie, known as "the desert".[5] Irrigation canals first brought water to the prairie in the 1890s, allowing the expansion of farmlands.

Sequim was officially incorporated on October 31, 1913. For many decades small farms, mostly dairy farms, dotted the area around the small town. Near the end of World War I, Sequim became a stop for a railway which passed through from Port Angeles to Port Townsend, built primarily to carry wood products from the forests of the western Olympic Peninsula.

Sequim has held its Irrigation Festival every May since 1895. As of 2016, it is the longest continuously running festival in the state and is in its 121st year.[14]

Drawing of a mastodon skeleton by Rembrandt Peale

Sequim is home to a herd of Roosevelt elk, one attraction to the area. The herd occasionally crosses US 101 just to the southeast of the town. Radio collars on some members of the herd trigger warning lights for motorists.[15]

Over the past two decades, Sequim has become famous for growing lavender and holds the Sequim Lavender Weekend (always the third weekend in July).[16]

The Museum and Arts Center features both natural and cultural exhibits including a mastodon mural mounted with the remaining mastodons bones, artifacts, and a video on the excavation.

The Dungeness National Wildlife Refuge is located just north of the city, near the mouth of the Dungeness River. It includes Dungeness Spit and a five-mile hike to the New Dungeness Lighthouse[17] at the end of the spit.

To the east along Highway 101 is Sequim Bay, a 4-mile long inlet from the Strait of Juan de Fuca. Along the western stretch is the Sequim Bay State Park. The inlet is a popular bird watching area.[18]

Sequim experiences a mediterranean climate (Köppen climate classification Csb), sometimes classified as an oceanic climate owing to the relatively cool temperatures. Despite its low rainfall, extreme summer temperatures are marginally more moderate than nearby extremely wet towns like Forks, owing to the coastal fog. Winters are mostly mild with very little snowfall. Many years there is no snow at all. The highest temperature recorded in Sequim was 99 °F (37.2 °C) on 16 July 1941, and the lowest −3 °F (−19.4 °C) on 19 January 1935.[20]

[Note: The U.S. Postal Service delivers to 28,000+ people within Sequim's zip code, 98382. Most of these postal patrons live outside the Sequim city limits in Clallam County.]

There were 3,340 households of which 17.1% had children under the age of 18 living with them, 36.5% were married couples living together, 9.4% had a female householder with no husband present, 2.8% had a male householder with no wife present, and 51.3% were non-families. 45.5% of all households were made up of individuals and 29.2% had someone living alone who was 65 years of age or older. The average household size was 1.87 and the average family size was 2.57.

There were 2,163 households out of which 15.5% had children under the age of 18 living with them, 40.1% were married couples living together, 9.1% had a female householder with no husband present, and 48.6% were non-families. 44.0% of all households were made up of individuals and 30.5% had someone living alone who was 65 years of age or older. The average household size was 1.90 and the average family size was 2.55.