Sex linkage is the phenotypic expression of an allele related to the allosome (sex chromosome) of the individual. In autosomal chromosomes both sexes have the same probability of existing (see Fisher's principle), but since humans have many more genes on the female X chromosome than on the male Y chromosome, these are much more common than Y-linked traits.

X-linked recessive traits are expressed in all heterogametics, but are only expressed in those homogametics that are homozygous for the recessive allele. For example, an X-linked recessive allele in humans causes haemophilia, which is much more common in males than females because they are hemizygous (see zygosity) and therefore express the trait when they inherit one mutant allele. In contrast, a female must inherit two mutant alleles, a less frequent event since the mutant allele is rare in the population.

The incidence of recessive X-linked phenotypes in females is the square of that in males (squaring a proportion less than one gives an outcome closer to 0 than the original). If 1 in 20 males in a human population are red-green color blind, then 1 in 400 females in the population are expected to be color-blind (1/20)*(1/20). (The term 'color-blind' is not completely accurate. There are degrees of weakness in color vision and it is now called 'color vision deficiency'.)

In classical genetics, a reciprocal cross is performed to test if a trait is sex-linked. 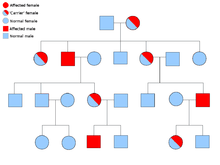 An example pedigree chart of the inheritance of a sex linked disorder.

Females possessing one X-linked recessive mutation are considered carriers and will generally not manifest clinical symptoms of the disorder. All males possessing an X-linked recessive mutation will be affected, since males have only a single X-chromosome and therefore have only one copy of X-linked genes. All offspring of a carrier female have a 25% chance of inheriting the mutation if the father does not carry the recessive allele. All female children of an affected father will be carriers (assuming the mother is not affected or a carrier), as daughters possess their father's X-chromosome. If the mother is not a carrier, no male children of an affected father will be affected, as males only inherit their father's Y-chromosome.

Various failures in the SRY genes

Sex-linked traits in other animals

It is important to distinguish between sex-linked characters, which are controlled by genes on sex chromosomes, and two other categories.[5]

Sex-influenced or sex-conditioned traits are phenotypes affected by whether they appear in a male or female body.[6] Even in a homozygous dominant or recessive female the condition may not be expressed fully. Example: baldness in humans.

These are characters only expressed in one sex. They may be caused by genes on either autosomal or sex chromosomes.[6] Examples: female sterility in Drosophila; and many polymorphic characters in insects, especially in relation to mimicry. Closely linked genes on autosomes called "supergenes" are often responsible for the latter.[7][8][9]