For other uses, see Shadowzone (disambiguation). 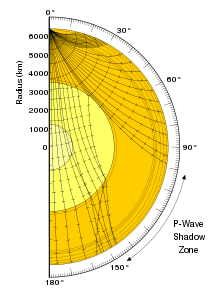 A seismic shadow zone is an area of the Earth's surface where seismographs can only barely[1] detect an earthquake after its seismic waves have passed through the Earth. When an earthquake occurs, seismic waves radiate out spherically from the earthquake's focus. The primary seismic waves are refracted by the liquid outer core of the Earth and are not detected between 104° and 140° (between approximately 11,570 and 15,570 km or 7,190 and 9,670 mi) from the epicenter. The secondary seismic waves cannot pass through the liquid outer core and are not detected more than 104° (approximately 11,570 km or 7,190 mi) from the epicenter.[2][3] P waves that have been converted to s-waves on leaving the outer core may be detected beyond 140 degrees.

The reason for this is that the velocity for P-waves and S-waves is governed by both the different properties in the material which they travel through and the different mathematical relationships they share in each case. The three properties are: incompressibility (

). P-wave velocity is equal to

whereas S-wave velocity is equal to

and so S-wave velocity is entirely dependent on the rigidity of the material it travels through. Liquids, however, have zero rigidity, hence always making the S-wave velocity overall zero and as such S-waves lose all velocity when travelling through a liquid. P-waves, however, are only partially dependent on rigidity and as such still maintain some velocity (if greatly reduced) when travelling through a liquid.[4] Analysis of the seismology of various recorded earthquakes and their shadow zones, led geologist Richard Oldham to deduce in 1906 the liquid nature of the Earth's outer core.[5]