A submarine, undersea, or underwater earthquake is an earthquake that occurs underwater at the bottom of a body of water, especially an ocean. They are the leading cause of tsunamis. The magnitude can be measured scientifically by the use of the Richter scale and the intensity can be assigned using the Mercalli intensity scale.[1]

Understanding plate tectonics helps to explain the cause of submarine earthquakes. The Earth's surface or lithosphere comprises tectonic plates which average approximately 50 miles in thickness, and are continuously moving very slowly upon a bed of magma in the asthenosphere and inner mantle. The plates converge upon one another, and one subducts below the other, or, where there is only shear stress, move horizontally past each other (see transform plate boundary below). Little movements called fault creep are minor and not measurable. The plates meet with each other, and if rough spots cause the movement to stop at the edges, the motion of the plates continue. When the rough spots can no longer hold, the sudden release of the built-up motion releases, and the sudden movement under the sea floor causes a submarine earthquake. This area of slippage both horizontally and vertically is called the epicenter, and has the highest magnitude, and causes the greatest damage.

Submarine earthquakes can also damage submarine communications cables, leading to widespread disruption of the Internet and international telephone network in those areas. This is particularly common in Asia, where many submarine links cross submarine earthquake zones such as the Pacific Ring of Fire. 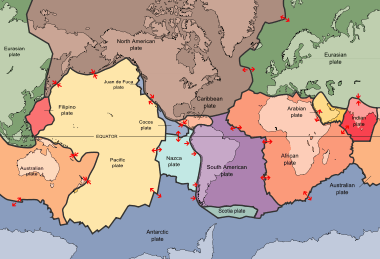 The different ways in which tectonic plates rub against each other under the ocean or sea floor to create submarine earthquakes. The type of friction created may be due to the characteristic of the geologic fault or the plate boundary as follows. Some of the main areas of large tsunami producing submarine earthquakes are the Pacific Ring of Fire and the Great Sumatran fault.

The older, and denser plate moves below the lighter plate. The further down it moves, the hotter it becomes, until finally melting altogether at the asthenosphere and inner mantle and the crust is actually destroyed. The location where the two oceanic plates actually meet become deeper and deeper creating trenches with each successive action. There is an interplay of various densities of lithosphere rock, asthenosphere magma, cooling ocean water and plate movement for example the Pacific Ring of Fire. Therefore, the site of the sub oceanic trench will be a site of submarine earthquakes; for example the Mariana Trench, Puerto Rico Trench, and the volcanic arc along the Great Sumatran fault.[2]

A transform-fault boundary, or simply a transform boundary is where two plates will slide past each other, and the irregular pattern of their edges may catch on each other. The lithosphere is neither added to from the asthenosphere nor is it destroyed as in convergent plate action. For example, along the San Andreas fault strike-slip fault zone, the Pacific Tectonic Plate has been moving along at about 5 cm/yr in a northwesterly direction, whereas the North American Plate is moving south-easterly.[3]

Rising convection currents occur where two plates are moving away from each other. In the gap, thus produced hot magma rises up, meets the cooler sea water, cools, and solidifies, attaching to either or both tectonic plate edges creating an oceanic spreading ridge. When the fissure again appears, again magma will rise up, and form new lithosphere crust. If the weakness between the two plates allows the heat and pressure of the asthenosphere to build over a large amount of time, a large quantity of magma will be released pusing up on the plate edges and the magma will solidify under the newly raised plate edges, see formation of a submarine volcano. If the fissure is able to come apart because of the two plates moving apart, in a sudden movement, an earthquake tremor may be felt for example at the Mid-Atlantic Ridge between North America and Africa.[4]

The following is a list of major submarine earthquakes.