Founded in 1954, and the same bus manufacturer was "Shinjin Bus Manufacturing Company" is an independent company and is now a part of the Daewoo Bus Corporation.

The Shinjin Industrial Company started as a parts producer in 1954, branching into the automotive field in 1958 as a rebuilder for the U.S. Army, with actual assembly commencing in 1962.[1]

The Government of South Korea enacted the "Automotive Industry Promotion Law" in 1962.[1][2] Under this legislation, the importation of assembled automobiles was outlawed, subsidies were made available to assemblers who were also afforded tariff exemption on the importation of parts.[3] Responsibility for deciding which firms would be authorized to undertake automobile manufacturing was held by the Minister of Trade and Industry, who at the time opted to appoint just one company for each product segment to maximize economies of scale.[3][4] The minister initially favored the Sammi Corporation for passenger automobiles.[2] Preference was shifted to Saenara Motors after the latter made alleged political contributions to the party recently established by the military government.[2] Consequently, Saenara signed an agreement with Nissan[3] who provided the company with technical assistance and a US$35 million loan to facilitate the construction of a factory in Bupyeong-gu, Incheon.[5] Saenara Motors began importing duty-free Datsun Bluebird (310) semi-knock-down kits from Nissan in November 1962 at a cost of ₩130,000 per unit.[6][7] The assembled cars were then retailed at ₩250,000—thus producing large profit margins that allowed Saenara to provide political donations to the government.[6] Due to a shortage in foreign currency, the junta later forbid the firm from importing further kits, leading to the cessation of manufacture in May 1963,[8] having built only 2,773 cars.[8] Saenara collapsed that July, thus resulting in its ownership transfer under joint management by the ministry and Hanil Bank.[6] 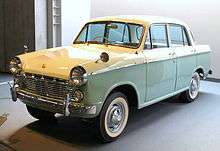 In November 1963, Shinjin released the Shinsungho (alternatively spelled Sinsungho)[9]—an exact copy of the Saenara Bluebird except they were fitted with Jeep engines.[8][10] Shinsungho models continued until 1966,[1] by which time just 322 Shinsungho cars had been produced.[10][11]

The ministry unveiled a new automotive plan in August 1964 that envisaged a parts and components sector that revolved around a sole automobile assembler.[6] The government reassigned Shinjin as the authorized automobile producer in May 1964 via a new Shinjin Automobile Company division, with the manufacturer taking control of the Saenara plant in November 1965.[1][2][12] The selection of the Shinjin bid was again attributed to sizeable contribution to the political party in power.[2][13] However, according to Odaka (1983), the government's selection appears to have made provision for the technological capability of Shinjin.[1]

Initially, Shinjin formed a technical venture with Mitsubishi Motors, assembling 100 units of the Mitsubishi "Gold" model with imported and semi-knock-down parts. This was denounced by other firms as it acted contrary to the government’s objective of localizing the parts industry, and as such Shinjin terminated the deal a year later.[2][14]

A new foreign venture was then established with Toyota in January 1966 and approved by the ministry on 2 February 1966.[15] This resulted in models such as the Toyota Corona from May 1966 being produced and achieving 21 percent local parts content.[1][6] Corona manufacture allowed the company to increase its 1965 asset base of ₩300 million to ₩3.2 billion in 1968. The profitability experienced by Shinjin became a source of contention with other industrial groups emerging as lobbyists to convince the government to grant further licensing, thus ending the monopoly.[6] In December 1966, the government decided to terminate the monopoly held by Shinjin by investigating other firms to commence passenger car production.[13] In 1967, Hyundai was approved, with Asia Motors following suit a year later, and Kia Motors in 1971.[2][16] The cessation of this monopoly, in conjunction with technological relationships with foreign corporations, substantially uplifted the total automotive industry output in South Korea to 33,000 units in 1969,[17] up from 7,400 in 1966.[13] However, as production numbers started to decline, the government implemented new measures to promote growth.[17] This included permission for the transfer of Toyota's shares in Shinjin to General Motors in 1972.[17] This ownership transfer was necessitated due to Toyota's wish to move into the Chinese market[2]—the People's Republic of China prohibited companies operating in South Korea and Taiwan from operating in mainland China as well.[2] The new partnership sought with General Motors, resulted in the 50-50 General Motors Korea (GMK) joint venture.[18] Due to financial difficulties, Shinjin sold its stake of GMK in November 1976 to the Korea Development Bank (KBD), and GMK was retitled Saehan Motors.[1][19] The KBD later sold this equity stake onto the Daewoo Group in 1978.[19]

In April 1974, a separate 50-50 alliance was set up between Shinjin and the American Motor Company (AMC), known as Shinjin Jeep Motors.[20] The following month, Shinjin entered into a technical partnership contract with AMC, and in October 1974, production of hard and softtop Jeeps commenced.[21] In March 1979 AMC relinquished its stake in the firm as it became a domestic corporation and its name was subsequently changed to Shinjin Motors.[22] The corporation was renamed once again in February 1981 to Geohwa Co.,[22] which was taken over by Dong-A Motors in December 1984.[21] This acquisition resulted in the "Dong-A" nameplate being applied to all South Korean manufactured Jeeps from 1985.[23] When the SsangYong Group chaebol purchased Dong-A in September 1986, the firm was subsequently renamed "SsangYong Motor Company" in March 1988. At the same time, all "Jeeps" produced by the former Shinjin/Geohwa under the "Dong-A" trademark were re-branded "SsangYong".[23]

Shinjin changed its name to GMK (General Motors Korea) after its 50-50 joint venture with GM resulting in ₩18&nbѕp;billion in capital. From now on, vehicle assembly of GM vehicles occurred, with engines from the German subsidiary of GM, Opel. These GM models were popular in South Korea and continued manufactured with to Saehan Motors and Daewoo Motors.