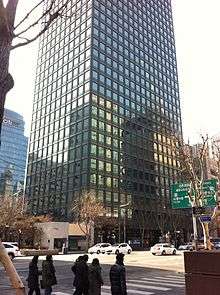 As with many other chaebols, SK Group's chairmanship was 'inherited' from father to son: from its founder the late Chey John-hyun to its present chairman Chey Tae-won (eldest son). Chey Tae-won is married to the daughter of the former South Korean President Roh Tae-woo.[2]

SK Group began when the current founders acquired Sunkyong Textiles in 1953.[3] In 1958, the company manufactured Korea's first polyester fiber on company grounds. It established Sunkyong Fibers Ltd. in July 1969, and started to produce original yarn. In 1973, SK then established Sunkyong Oil, beginning a vertical integration strategy to manage production, "From Petroleum to Fibers”. That same year, the company acquired the Walkerhill Hotel.

SKC imported propylene oxide (PO, a chemical used in manufacturing polyurethane) production technology from Germany in May 2006. It is scheduled to produce 100,000 tons of PO from 2008.[18] 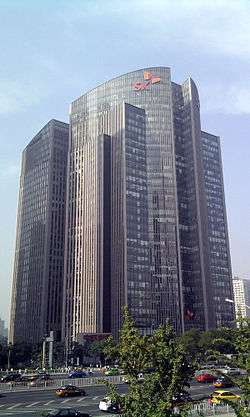 SKC (Korean: SKC or 에스케이씨, KRX: 011790), headquartered in Seocho-dong Seocho-gu Seoul, is the leading Korean company in chemical and film industry. SKC was founded and established in 1976 as previous name of Sunkyung Chemicals Ltd (Korean: 선경화학 (주)). SKC developed polyester films firstly in Korea, by its own efforts. Nowadays, SKC is one of the best polyester film makers in the world, supplying 10% of worldwide demands with its wide applications including labels, LCDs, and solar cells. With its main plant and R&D center located in Suwon, South Korea, it also operates large capacity of film plant (SKC Inc.) in Georgia, United States. SKC is now developing into one of the leading companies dealing with a variety of eco-friendly, advanced materials for the future energy and chemical industries such as biodegradable films, battery components, LEDs and photovoltaic materials.

SK Energy and SK Innovation (Korean: SK 에너지 or 에스케이 에너지 and SK 이노베이션 or 에스케이 이노베이션, KRX: 096770) is a South Korean enterprise formed as part of the July 1, 2007, reorganization of SK Corporation into a holding company and operating company, SK Holdings and SK Energy, respectively. In 2011, the petroleum business was spun off to become SK Energy. Simultaneously the chemical business was spun off to become SK Innovation. SK Energy was founded in 1962 as Korea’s first oil refiner-. In 1982, changed company name toYukong.SK Energy is an energy and petrochemical company with 5,000 employees, KRW 23.65 trillion in sales and 26 offices spanning the globe. The company is Korea’s largest (and Asia’s fourth largest) refiner with a refining capacity of 1.15 million barrels per day, as of 2006. SK Energy is engaged in exploration and development activities in 26 oil / gas blocks in 14 nations worldwide.[21][22]

SK Corporation Holdings (Korean: SK 주식회사 홀딩스 or 에스케이 주식회사 홀딩스, KRX: 003600) is the holding company which resulted when SK Corporation was reorganized in July 1, 2007, into a holding company and operating company, SK Holdings and SK Energy, respectively. SK Holdings is a part of the SK Group that focuses on 3 core business interests, Energy & Chemicals, Telecommunications, and Trading & Services. The SK Group is composed of 88 affiliate companies that share the SK brand and culture. In 2006, SK Group recorded combined revenues of $75.8 billion, with exports contributing $26.4 billion of that total. SK continues to expand its global presence, with more than 25,000 employees who work from 113 offices worldwide.

SK Telink (Korean: SK 텔링크 or 에스케이 텔링크), a subsidiary of SK Telecom, was established in April 1998 as an international telephony service provider and has grown into a major player in the international calling market. Under the brand name 00700, the company provides international call services. Building on the commercial long-distance telephony and value-added services launched in 2005, the company began offering Korean SMS in June 2006 in the U.S. The service allows subscribers to send and receive Korean text messages in the U.S., as well as to and from Korea. From 2008 on, SK Telink also started e-Learning service (giving Lectures to customers through the internet) and Foreign Language Test service BULATS. BULATS is being used as the main English speaking test for most of the SK Group subsidiaries.

SK Corporation C&C (Korean: SK 주식회사 C&C or 에스케이 주식회사 씨앤씨) was established in 1991 and is currently one of the "Big Three" IT services companies in Korea. SK C&C has business interests across IT services, including telecommunications, banking & finance, government, public, logistics, and other fields. And the company is expanding its presence overseas. Industries in its product portfolio include GIS, ITS, ERP, national security & defense, postal, e-government, e-learning, postal, and other areas. They also specialize in mobile commerce products and SK C&C USA launched Google Wallet services recently.

SK Wyverns (Korean: SK 와이번스) is one of the top-ranking baseball teams in the Korea Baseball Organization.

SK's subsidiary companies all operate under the SK Management System (SKMS) which was developed, articulated and enhanced by SK’s Chairman, Chey Tae-won.