Kia was founded in December 1944 as Kyungsung Precision Industry, a manufacturer of steel tubing and bicycle parts, eventually producing Korea's first domestic bicycle, the Samchully, in 1951.[1] In 1952, Kyungsung Precision Industry changed its name to Kia Industries,[7] and later built Honda-licensed small motorcycles (starting in 1957), Mazda-licensed trucks (1962) and cars (1974). The company opened its first integrated automotive assembly plant in 1973, the Sohari Plant.[8] Kia built the small Brisa range of cars until 1981, when production came to an end after the new military dictator Chun Doo-hwan enforced industry consolidation. This forced Kia to give up passenger cars and focus entirely on light trucks.[9] Prior to the forced 1981 shutdown, Kia rounded out its passenger car lineup with two other foreign models assembled under license: the Fiat 132[10][11] and the Peugeot 604.[12][13]

Starting in 1986 (when only 26 cars were manufactured, followed by over 95,000 the next year),[14] Kia rejoined the automobile industry in partnership with Ford. Kia produced several Mazda-derived vehicles for both domestic sales in South Korea and for export into other countries. These models included the Kia Pride, based on the Mazda 121, and the Avella, which were sold in North America and Australasia as the Ford Festiva and Ford Aspire.

In 1992, Kia Motors America was incorporated in the United States. The first Kia-branded vehicles in the United States were sold from four dealerships in Portland, Oregon in February 1994. Since then, Kia methodically expanded one region at a time. Dealers in 1994 sold the Sephia; and a few years later, the United States segment expanded their line with the addition of the Sportage. Over one hundred Kia dealerships existed across thirty states by 1995, selling a record 24,740 automobiles.[15]

Since 2005, Kia has focused on the European market and has identified design as its "core future growth engine"—leading to the hiring of Peter Schreyer in 2006 as Chief Design Officer[19] and his subsequent creation of a new corporate grille known as the 'Tiger Nose'.[20][21]

In August 2014, the company received international attention when Pope Francis of the Catholic Church rode in one of their compact cars, the Kia Soul, during a five-day visit to South Korea.[24][25] The Kia Soul drew bigger attention than two other vehicles used by the Pope, their Kia Carnival and Hyundai's Santa Fe, because it appeared in the high-profile welcoming ceremony of his arrival at the Seoul Airport on 14 August.[26][27]

In 2016, Kia Motors model reliability was ranked first in the United States by J.D. Power and Associates, becoming the first non-luxury automaker since 1989 to top that list.[28]

Kia Motors Corporation (KMC), founded in 1944, is South Korea's oldest manufacturer of motor vehicles and is now a subsidiary of the Hyundai-Kia Automotive Group. Over 1.5 million vehicles a year are produced in 13 manufacturing and assembly operations in eight countries, which are then sold and serviced through a network of distributors and dealers covering 172 countries. Kia today has 40,000 full-time employees worldwide and annual revenues of over US$14.6 billion. Kia Motors Corporation's brand slogan is "The Power to Surprise". From August 2009 until December 2012, the company has been led by Hyoung-Keun (Hank) Lee.[31] 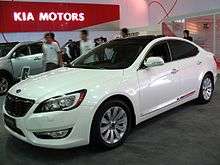 Kia Motors America (KMA) is the American sales, marketing, and distribution arm of Kia Motors Corporation based in Seoul, South Korea. KMA offers a complete line of vehicles through more than 755 dealers throughout the United States. For 2008, KMA recorded its 14th consecutive year of increased U.S. market share.

In November 2009, Kia started production at the first U.S. Kia Motors plant, Kia Motors Manufacturing Georgia, in West Point. As of December 2011, the facility was building the 2012 Kia Sorento crossover vehicle and the 2012 Kia Optima sedan.

Kia Motors Europe (KME) is the European sales and marketing division of Kia Motors Corporation (KMC). In 2007, KME moved from its previous location at Hauptstrasse 185, Eschborn (near Frankfurt), to a new purpose-built facility adjacent to the Messe, in Frankfurt city centre.

From 1995 to 1999, Kia produced left- and right-hand drive versions of the Sportage SUV at the Karmann factory in Osnabrück, Germany. From 1999 until production of the model ceased in 2003, all Sportage production reverted to South Korea.

Kia began exporting cars to Europe in mid-1991, initially selling only the Pride mini-car. It initially proved popular with buyers, but sales fell towards the end of the decade, and the end of production was finally announced in May 2000, with its successor — the Rio — not going on sale for another year.

The European range expanded in 1994 when Kia began importing the larger Mentor, a range of medium-sized hatchbacks and sedans which were marketed as inexpensive and well-equipped alternatives to the likes of the Ford Escort and the Vauxhall/Opel Astra.

A facelift in 1999 saw the Mentor name retained for the saloon (sedan), but the hatchback was renamed Shuma. These models remained on sale until 2004, when the newer Cerato was launched and gave Kia one of its first serious competitors against mainstream brands.

The Sportage SUV range, first sold in 1995, has been popular across Europe, but, since 2002, Kia has gained more sales in this market thanks to the launch of the larger Sorento.

Despite Kia's range increasing from one car as late as 1993 to three cars by the end of 1995, British sales actually decreased in that period, from nearly 5,500 in 1993 to less than 4,000 the following year. In 1998, Kia's future in Britain was thrown into serious doubt when it sold less than 3,000 of its whole range – the worst in any full year on the British market.

Kia did not enter Europe's large family car market until the launch of its Credos four-door sedan in 1999. This car was similar in size to the Ford Mondeo and the Opel/Vauxhall Vectra, but, on its launch, was actually less expensive to buy than the smaller Focus and the Astra. It had a spacious interior, large boot, competitive asking price, and high equipment levels, but it had little more appeal to sway buyers away from established European brands like Ford of Europe, Vauxhall/Opel, Citroën, and Peugeot. Its successor, the Magentis, launched in 2001, was still nowhere near as popular as Kia might have hoped it would be.

Kia entered the MPV market in 1999 with the Sedona. On its launch, it was the lowest-priced, full-size people carrier on sale in the United Kingdom.

With the range expanded by 1999, sales for that year reached almost 6,400 – more than double the previous year's total. That annual sales figure had almost been matched in 2000 by the end of May, reflecting Kia's growing popularity with British buyers.[32] By 2009, Kia was firmly established as a popular brand in Britain, when sales broke the 50,000 barrier for the first time and the brand now had a share of more than 2% in the new car market. The Picanto was the most popular single model with nearly 17,000 sales.[33]

The company has built a $1 billion manufacturing plant in the northern Mexican state of Nuevo León, which produces 300,000 cars a year. Details of the factory, built in the city of Pesquería, were revealed in a joint press conference given by Kia Motors CEO Hyoung-Keun Lee and the President of Mexico Enrique Peña Nieto in Mexico City on 28 August 2014. The plant was expected to be completed in the first half of 2016.[35] 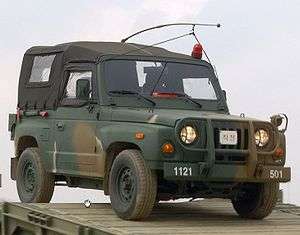 Kia Motors has specialized in the production of military vehicles with variants and other transportation equipment and by supplying them as a sole maker of military vehicles designated by the South Korean Government since 1976, when Kia Heavy Industry Co., Ltd was established. Kia is currently designing a Kaiser Jeep M715-type vehicle named the KM450 for the South Korean Army on license from the U.S. Government. Kia is also the owner of the former ex-Asia Motors factory at Gwangju.

Most of Kia's main plant locations are in South Korea:

Kia also has facilities in China, Mexico, Slovakia, the United States and Vietnam:

Beginning in 2006 Kia identified design as its "core future growth engine" – leading to the 2006 hiring of Peter Schreyer and to the 2005 hiring Tom Kearns as Chief Design Officer.[19] Schreyer had previously worked at Audi (designing the Audi TT) and Volkswagen and had won the Design Award of the Federal Republic of Germany.[37] Kearns had previously worked at Cadillac as Chief Design Officer and was responsible for influencing Cadillac's direction of hard angles and sharp lines within their design.[38]

Schreyer has since been central to a complete restyling of Kia's lineup,[39] overseeing design activities at Kia's design centers in Frankfurt, Los Angeles, Tokyo, and the Namyang Design Center in South Korea.[40]

With the Kee concept vehicle, shown at the Frankfurt Motor Show in 2007,[41] Kia introduced a new corporate grille[41] to create a recognizable 'face' for the brand. Known as the Tiger Nose, Schreyer indicated he wanted "a powerful visual signal, a seal, an identifier. The front of a car needs this recognition, this expression. A car needs a face and I think the new Kia face is strong and distinctive. Visibility is vital and that face should immediately allow you to identify a Kia even from a distance."[41] Schreyer described how the Kia Tiger Nose came to be as he explained, "I was just working on the car and just thinking about different possibilities, and suddenly I found it."[42] Commenting on the new signature grille in 2009: "From now on, we'll have it on all our cars".[43] Kia has since featured the Tiger Nose on all of their vehicles, ranging from the compact Kia Soul, on to the edgy new design of the Kia Optima, and to the larger SUV, the Kia Sorento.

Kia cars have won the International Car of the Year award every year since 2013.[44]

In late 2012, Kia Motors was forced to admit error in inflating its United States Environmental Protection Agency mileage claims and had to reduce its fuel economy claims in the U.S. by about 3 percent across the board and to offer compensation to previous vehicle buyers.[45] 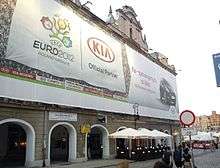