Shintaro Abe (安倍 晋太郎, Abe Shintarō, April 29, 1924 – May 15, 1991)[1] was a Japanese politician from Yamaguchi Prefecture. He was a leading member of the ruling Liberal Democratic Party (LDP). He was Japan's longest reigning postwar foreign minister.[2]

Abe was born in Tokyo on April 29, 1924. He was raised in his father's home prefecture of Yamaguchi from soon after his birth. He was the eldest son of pre–World War I politician and member of Parliament Kan Abe. His mother was an army general's daughter.[3]

After graduating from the Faculty of Law at University of Tokyo, Shintaro Abe began his career as a political reporter for Mainichi Shimbun.[4] He became a politician in 1957, when he started working as a legislative aide of the then-prime minister Nobusuke Kishi.[4] He won his father's seat in the House of Representatives in 1958.[3]

He led a major LDP faction, the conservative Seiwa Seisaku Kenkyūkai, whose reins took from former Prime Minister Takeo Fukuda in July 1986, and held a variety of ministerial and party posts. He held different ministerial posts, including minister of agriculture, forestry and fisheries, minister of international trade and industry.[3] Abe was named as minister of international trade and industry in the cabinet of the then prime minister Zenkō Suzuki on November 30, 1981.[5] During this period, he was seen as young leader groomed for the future prime ministry.[5] In November 1982, he was appointed minister of foreign affairs in the cabinet of the then-prime minister Yasuhiro Nakasone, replacing Yoshio Sakurauchi. His term lasted until 1986.[2] 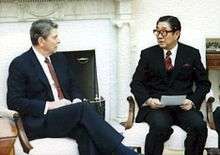 Meeting with Ronald Reagan in 1987

Abe was a top contender to succeed Nakasone as prime minister in 1987, until he stepped aside for Noboru Takeshita, head of a powerful rival faction. Then, he was given the post of general secretary of the party in 1987.[2] In 1988, his chances of becoming prime minister sometime in a near future were again thwarted when his name became associated with the Recruit-Cosmos insider-trading stock scandal, which brought down Takeshita and forced Abe to resign as the party's general secretary in December 1988.[2]